An Open Letter to Aly Raisman 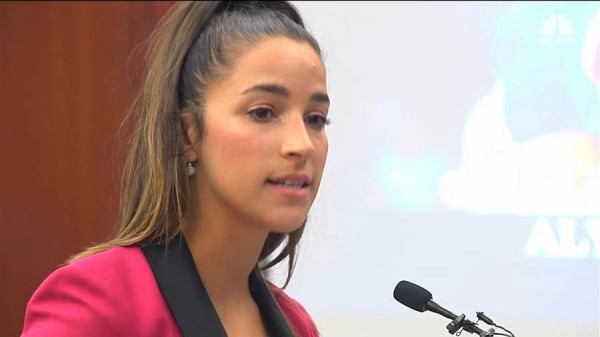 Words fail to describe the power, conviction and courage that I was privileged to witness watching you testify before the court and in front of your abuser, that monster as you called him. My daughter and I have watched you in the Olympics in awe of your physical strength and talent as a decorated US Olympian. But what I just witnessed in that courtroom surpasses anything anyone could do in sports. You just modeled what it means to be a survivor. A childhood sexual abuse survivor. You just gave voice for so many other who may never have the opportunity to confront their abuser. You have just inspired a new generation of women to not only accept the abuse of trusted adults but also to those who are told or who know and do nothing. Often times in cases of abuse, people know, people have a feeling and we all have to know that we are accountable to keep children safe. You, Aly have made that statement loud and clear. Bravo.

My ten year old daughter is a gymnast. She doesn’t know anything about this right now. But, when she is old enough, I will show her your testimony. I will use your words, your conviction, as a model for standing up for justice.

I work with children who are survivors of sexual abuse. Until now, until you, I haven’t had a modern role model to relate to. Though statistics vary, and are under reported, about one in every five girls are sexually abused and are most vulnerable between the ages of seven and thirteen. This most commonly occurs by people who are most trusted, such as in your situation. You are giving voice to this, adults need to believe it when us professionals say it is usually someone you know well. An uncle, a coach, a teacher, a neighbor…a doctor.

You said in your statement that you were no longer a victim but a survivor and that the consequences of his actions were far reaching. While you are right, feelings of worthlessness, trouble trusting others and strained relationships are common after sexual molestation, this does not have to be your ending. Your story has just begun. Your story of putting together your pieces, becoming an advocate and coming into yourself as a young woman of strength is unfolding before our eyes.

The applause and the incredible support that you received from that courtroom and that judge was representative of how we all felt watching you. Aly, because of you I feel more confident than ever that the USGA will become better and safer than ever. I believe that for no other reason than because of you. I also believe that some young girl, somewhere, will speak out until she is heard, because of you. You are my shero.