An allergy scare for my college freshman

I ran into the Emergency Room and saw my 18 year-old daughter lying there with a team of doctors surrounding her. Her entire body was red as a beet and covered with hives, her face was swollen and her lips looked blue. “I’m scared,” she said when she saw me. So was I.

Something like this had never happened before. How on earth did it happen on her second night of her freshman year of college?

We discovered my daughter’s tree nut allergy when she was a two year-old. She picked a small nut out of a mixed nut bowl at my mother-in-law’s house and ate it. Within a few minutes she began coughing and had a few small hives on her face. I called the pediatrician who instructed me to give her Benadryl but, if it got worse at all, to take her to the Emergency Room. It didn’t. In a short while she stopped coughing and her hives disappeared.

That week, we took her to an Allergist who diagnosed her as being highly allergic to cashews and pistachios, and somewhat allergic to hazelnuts. He instructed us to keep her away from all tree nuts as a precaution. If there was ever contact or any symptoms at all, we should give her Benadryl. If that did not work, we were to administer an Epipen, which he prescribed and taught us how to use.

He explained that there was no way to know what her reaction to the allergen would be. This was all very scary and we made it our goal to keep nuts away from her.

As she got older, her friends and their parents knew of her allergy, as did her schools, and we sent her to a nut-free camp.

She also became super-vigilant about her own allergy. She made it her business to always ask “Are there nuts in this?” whenever she was in a restaurant or store. If she was unsure about anything, she would call me to ask.

For 18 years she was kept safe. There were less than a handful of incidents where she felt a hive or two and took the Benadryl which always worked. Nothing more than that. 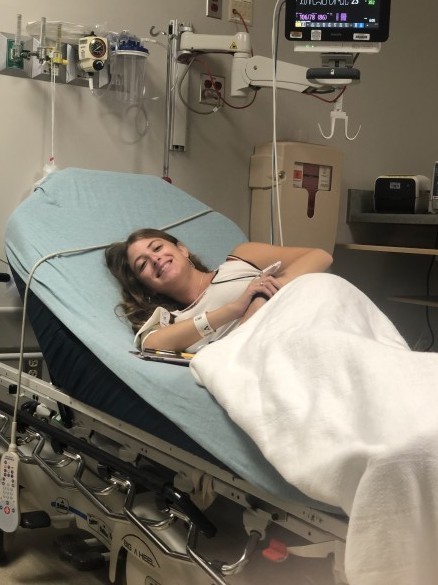 When it came time for college (the years certainly flew by), she applied and was accepted to her dream school. We did all of the regular things to prepare: she found a roommate, we did the shopping, we packed her up, and flew from New Jersey to Nashville where she would be spending the next four years.

As usual, we also prepared for her allergy. We packed her plenty of Benadryl and her Epi-pen which she would keep in her night table drawer, just in case.

Freshman move-in day went seamlessly. Two years prior, we had an awful experience with her older sister, so this seemed like a great start. Room looked beautiful, her roommate was sweet as can be and we worked well with her lovely family. She was just a little teary as we said goodbye but when I spoke to her later in the day she sounded great.

Since we were lucky to be in Nashville, my boyfriend and I stayed an extra couple of days to enjoy this amazing city. Knowing she was settled, we spent the following day having fun, eating, drinking, and exploring.

Little did any of us know what was about to happen.

Back at our hotel after our evening out, my phone rang. When I saw my daughter’s name on the screen, my heart fell. A midnight phone call could not be good.

In a panicked voice she told me she felt hives and an itchy throat, but she had not eaten anything out of the ordinary. She explained that she was just about to get into an Uber to go out with her roommate and new friends but felt a hive on her face. This has happened before, so she thought it best to go back to her room and take a Benadryl. Her roommate offered to go with her but she was certain that she would be fine so insisted on going alone.

She did go back to her room and took the Benadryl but her symptoms were not getting better, they were getting worse. This was when she called me. At first, I thought she was just panicking. She was in a new place and she had not eaten anything with nuts so maybe it was nerves taking over. Within a minute, I knew I was wrong.

She had her Epi-pen but was terrified to administer it to herself. She luckily did have the sense to knock on the RA’s door. After taking a look at her, he quickly called campus police who came and rushed her to the hospital, which is thankfully less than five minutes from the school.

At the same time, my boyfriend and I ran down to our car and drove to the hospital, face-timing her the whole way.

She arrived just a few minutes before we did, but by the time we walked into the ER, it was quite a scene. She looked almost unrecognizable, there were doctors and nurses on all sides of her, and she was being poked and prodded. She looked at me and cried, both from fear and pain. I kept it together, although my heart was racing, looked her in the eye and told her that she was in the right place, I was there with her, and she would be fine.

They gave here a shot of epinephrine and IV steroids. Then we waited. Within a few minutes, her color started coming back and the swelling was going down. I knew she was going to be ok, but the doctors needed to keep her overnight to make sure she continued to improve and did not relapse.

The questions was - how did this happen?

Her new roommate, who was so sweet and came running to the hospital as soon as she heard what had happened, and gave us what we think was the answer.

They were drinking in another room (yes college kids drink!), but they did not have cups so they all decided to drink from the same bottle. Someone must have unknowingly eaten nuts before she drank and contaminated the bottle.

She was released from the hospital in the morning back to normal.

This was a hard lesson to learn for my daughter but I hope a cautionary tale for other college students with food allergies. You are no longer home and in your bubble. Not everyone is going to know you and about your allergy. There is no school nurse ready to take care of you. You need to be ultra-cautious. Do not eat or drink.from anyone else’s room. Do not share containers or utensils. Even be careful about kissing. Make sure you know how to use your Epipen and teach those around you.

I am just thankful that my daughter is ok and back in her dorm and starting classes. I am also grateful that we decided to hang around for a few days so that we were there for her. And I am praying that this does not ever happen again.

Joining A Club We Never Wanted To Belong To (Living Life As A Food Allergy Parent)
Send Your Child With Food Allergies to School SAFELY
A Tale of Mommy Preparedness: Traveling with a child with a Life Threatening Allergy
advertisement

Joining A Club We Never Wanted To Belong To (Living Life As A Food Allergy Parent)
Send Your Child With Food Allergies to School SAFELY
A Tale of Mommy Preparedness: Traveling with a child with a Life Threatening Allergy