A Strand of Hair Sent My Infant to the ER

Published by Jennifer Otto on October 1, 2021

Once upon a time, I spent three hours in the emergency room, with my infant daughter, all because of a strand of hair.

Yeah, I know what you’re thinking, because I said it out loud, myself, AT LEAST six times while in the waiting area:

That evening, we were enjoying our normal family dinner time. And, by that, I mean my husband and I were eating, while three out of four kids were either singing, yelling, or feeding the dogs. Our three-month-old daughter sat quietly in an infant bouncer seat, between Hubs and me.

I looked down at her, mid-conversation.

It was as simple as that. I glanced at our resting girl, wearing only a flowered onsie, sucking on her binky and holding a rattle tight – and, that’s when I noticed it.

Our daughter’s toe was swollen.

But, not just swollen. It seemed to be disfigured and turning colors.

“Oh my God, what in the hell is wrong with her toe?” I shouted, interrupting our conversation and prompting the other three kiddos to cease singing, yelling, and dog-feeding.

I quickly unbuckled baby from her seat, and brought her closer for inspection.

Something was wrapped around her toe. Something light in color, and very thin. And – it was tight. 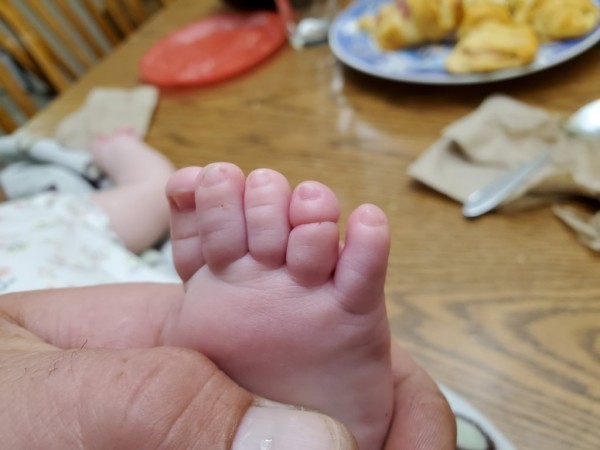 I immediately moved a finger over top of the strange fiber, checking to see if it would easily come loose.

Nope. One touch, and it was clear that thing wasn’t going anywhere easily.

We pushed aside plates and silverware to lay our daughter on the kitchen table for closer examination. Hubs hurriedly got up to grab a flashlight and tweezers. Kids one, two, and three saw their chance to slip out of the room without finishing their dinners (as if they would have anyhow).

I stayed near the top of baby’s body, holding her arms away from her feet. I tried to speak soothingly to her, but the moment my husband touched the tweezers to her toe, she let out a blood-curdling scream I didn’t know infant’s lungs were capable of producing. It was then we realized, whatever was around her toe wasn’t just tight, it was deep. 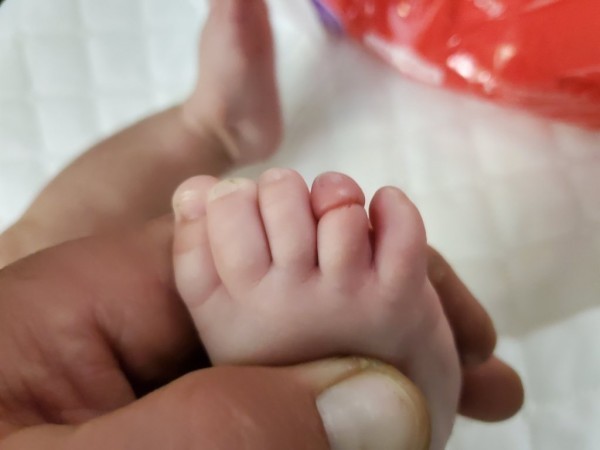 Our daughter screamed and cried and kicked her little legs.

We spent the next 10 to 15 minutes trying to extract the tiny fiber, which was clearly cutting off circulation. I held her in different positions so Hubs could try the tweezers at alternate angles. She continued to scream every time her toe was handled.

Looking both defeated and worried, my husband declared he just couldn’t make it budge.

Baby girl and I prepared for a trip to the ER.

On the car ride to the hospital, I felt sick. How long has this thing been hurting my baby?

I shuddered at the thought that the nurses and doctors would judge me. I was certain they’d be calling child services at first sight of my daughter’s swollen appendage. Surely, only a negligent parent would overlook something like this. How did we not notice sooner?

Upon arrival in the ER, I was met by a nurse, asking me the question I had been dreading: “so, what brings you in?”

I fumbled my words and stuttered. I rambled off one giant run-on sentence about how something is around my daughter’s toe…I don’t know what it is or how long it’s been there…her toe is turning colors…my husband and I are beside ourselves…

The nurse looked at me with understanding eyes and said, “ohhh yeah. That can happen!”

Excuse me, miss, but I think you misspoke. What you MEANT to say was: “holy shit, wtf?”

We were taken back for vitals, where a second nurse asked what the problem was. I explained it again, this time a bit slower and less hesitantly.

“Aww! Poor thing! It’s probably a hair or something.”

I looked up at the smiling nurse. “Hair? Uh, I guess. We couldn’t tell, really.”

Why is everyone so smiley and understanding? Don’t they know my kid’s toe is about to fall off, and it’s all my fault?

We were immediately taken back to a room and met by a doctor seconds later. To my surprise, she was hardly concerned with how and when this happened. She looked at my daughter’s toe, then with pure empathy in her eyes said basically the same thing the women before her had. “Oh, poor baby girl! It’s probably a hair. Let’s see what we can do.”

Absolutely no one is surprised by this injury?

The doctor went on to examine my daughter’s toe. As we suspected, it was both very tight and deep into her skin. Doc concluded the best approach for extraction would be to use a scalpel. She made a cut lengthwise on the top of her toe, cutting through the swollen skin to get to the hair.

It took a steady hand, some alcohol wipes, and guaze, but the doctor was able to cut the hair and release baby’s toe from constriction (I’ll spare you the details on how much she cried through that process – I’m sure you can imagine).

After the extraction, doc needed us to do lots of sitting around and waiting. The point was, she wanted to make sure proper color was returning to her skin. Blood flowing. No more bulging. Ya know – signs that her foot would again look normal.

Slowly, our girl was looking better. The problem was solved!

So, how the hell did this happen?

Apparently, it’s no coincidence that all the hospital staff were underwhelmed at the sight of my kid’s reddish-purple toe. It’s actually a common injury, and even has a name: hair tourniquet syndrome.

According to the handy-dandy hospital print out I was sent home with, hair tourniquet syndrome is “caused by a hair, string, or similar object becoming wrapped around a baby’s body part.” We can probably assume it was my hair that did the wrapping, because it’s more likely to occur in children under 4 months of age, as “hormonal changes in the mother may cause her to lose more hair than usual during this time period.”

Well, shit. I guess it was kind of my fault.

But, also totally not. 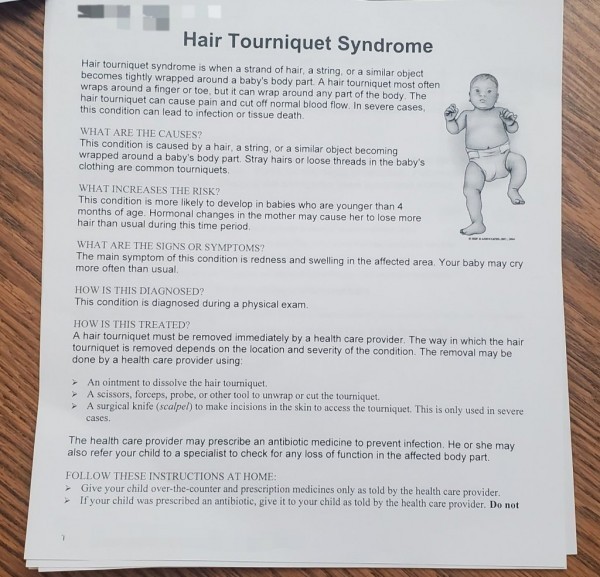 The extremely compassionate doctor who took care of us assured me that this is a weird medical phenomenon that “just happens.” Babies have tiny fingers and toes…and shedding hair gets everywhere. Simple as that. The trusty Internet will tell you that this a rare occurrence – but, the doc tells me it’s actually probably underreported because plenty of cases are less severe and solved at home.

Turns out I’m not a sucky mom!

I’m happy to report that days later, baby girl is doing just fine. She still has her toe, no tissue damage, and you can barely notice where the cut was made!

Of course, I now obsessively check her for hairs every time I look at her. But, then again, after that, wouldn’t you?