A mother was made to carry

As I carried a trunk load of groceries into the house, I was struck by how I always seem to be carrying more than my share.

Seventy-five percent of the items in those bags weren't even for me, but I was left to carry them all in by myself. My kids had barely waited for the car to come to a stop before disappearing into the wonderful world of childhood. And while the morning involved nothing more than a typical trip to the grocery store, it provided a perfect example of how many things I'm called to carry that aren't actually mine.

There are the backpacks and water bottles and snacks. The toys and books and sometimes straight-up trash that my kids insist on hauling everywhere we go, only to hand it to me when something more interesting captures their attention. There are the shoes that have been yanked off feet and tossed straight down the middle of aisle 7. The jackets that are mindlessly tossed aside. The half-eaten suckers and sticky wrappers.

There are the heavy emotions that belong to them, but weigh on me. The disappointment from not getting something they wanted. The hurt feelings upon being blamed for something they didn't do. The shame related to a poor choice. The tears and sorrow when disobedience leads to a consequence.

But so it goes with motherhood.

We pretty much carry it all. Even that which does not belong to us.

Which makes sense I suppose, since the very first task we are called to as mothers is carrying a child within our very own bodies, only to realize that child isn't actually ours but has simply been entrusted to us for an unspecified amount of time.

Carrying. It's what we were made to do. 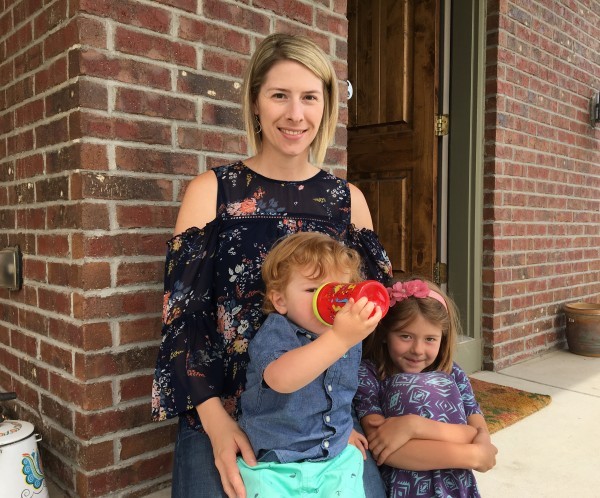 We were specifically built to carry our children and all the things that make up their lives. We were made to be their sturdy tower in a rather unbalanced world.

And just like carrying 27 grocery sacks and a couple of boxes inside on your own, it can be overwhelming. And exhausting. And frustrating.

But I like to think that in some way, our children carry us too.

With their unconditional love, despite the weight of our mistakes. With their handmade cards emblazoned with the words BEST MOM EVER, even though that statement cannot be proven.

With their hands that instinctively grab ours when trouble looms, illustrating a trust that can't be replicated anywhere else. With their smiles and laughter that break the tension, even if for just a moment.

Because even when the load threatens to break us, they somehow make it seem a little lighter.

I'm Taking Back my Joy - My Permission to Slow Down and say YES to the things that Matter.
Mom math: My 3 kids do not equal your 3 kids
A Therapist/Mom’s advice on how to let others help you
advertisement

I'm Taking Back my Joy - My Permission to Slow Down and say YES to the things that Matter.
Mom math: My 3 kids do not equal your 3 kids
A Therapist/Mom’s advice on how to let others help you