A Mother is Breastfeeding? Guess What—It's Not About You

Published by Karen Johnson on August 4, 2016 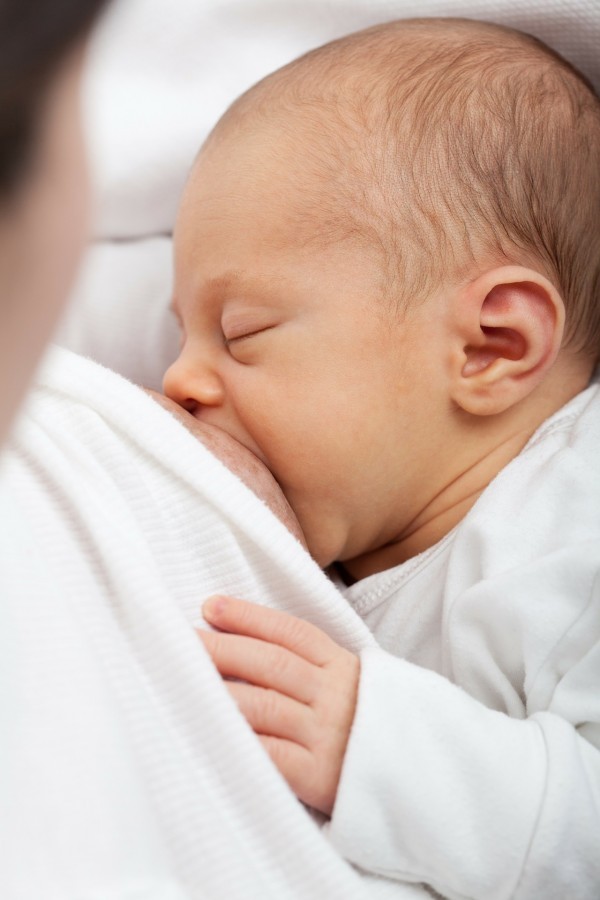 Ack! Not another breastfeeding post! Don’t do it! (I imagine that’s what you are saying.) I get it—it’s everywhere. There seems to be quite the war out there about breast vs. bottle and public feeding vs. hiding in a closet.

This is not a post about formula. I could not care less what the method is that you use to feed your baby, so long as baby gets food. Seriously. DON’T CARE. What I will weigh on, however, is the whole “women breastfeeding in public” debate. And I would like to do so by telling you a story.

This is a story of a first-time mom. She had a relatively uneventful pregnancy (unless you consider nuclear blast gaseous emissions and falling asleep with a half-eaten box of Cheez-its in her hand eventful… her husband sure did). And she assumed she’d breastfeed without too much issue. Nobody really warned her otherwise. Most people she knew just did it and it all seemed relatively drama-free.

This mom worked until the day before baby arrived. Her labor was, like many first labors, long and difficult. But in the end, her healthy baby boy was born. Breastfeeding was a challenge from the get-go. At first she blamed it on her milk not coming in yet, so she supplemented with formula bottles while in the hospital. However, she quickly became alarmed upon realizing that her baby didn’t naturally know what to do. He was fussy and thrashing his face back and forth and she couldn’t calm him down. She truly did want this to work though, and was determined to persevere. On her second night at the hospital (the last night she’d have round the clock nurses), she asked for help. One of her incredibly patient and kind nurses climbed into her bed at 3:00 in the morning to help this new mom feed her baby. Or at least try to.

The following day that new mom and her husband took their new baby home and began their journey as parents. On their own. Here we go. That fussy baby maintained his stubborn anti-breastfeed disposition for a solid eight weeks. That new mom cried every day, not just from the pain, but also because of her failure. This task that she had assumed would be so easy to do, so natural, was damn near impossible.

Finally, one day, he turned a corner. And maybe she did too. Maybe they both learned to relax. They both accepted each other as two players on the same team, working toward a common goal. They stopped fighting and it became peaceful. That mom was able to nurse that baby for over a year, as well as his siblings to come. Which is exactly what she wanted all along.

The reason I started by telling her story—my story, is because I feel for mothers who are trying to feed their babies in public and are chastised for it. I remember going to an event when my son was about six weeks old. He hadn’t turned that corner yet, which means he was feeding every two hours, due to his inability to ever get a good feeding in. But six weeks was just long enough to ensure I was fully exhausted, frustrated, and over the honeymoon period of new baby life.

No one at this event specifically asked me to nurse in another room, but of all of the mothers there (and there were many) none of them were known to nurse publicly. When it was time to feed my child, the host immediately offered me a bedroom down the hall. She was being kind, as she ensured I had plenty of pillows. I said thank you.

This was the first event I had gotten dressed up for since my baby was born, and finding something that fit my postpartum body was no small feat. I had blow-dried my hair. I wore makeup. And my “nice” jewelry.

And of the six hours my husband and I attended this event, I spent three of them in a bedroom down the hall with very nice pillows. The process of nursing on both sides, burping in between, changing a diaper, cleaning up spitup, and everything else involved sometimes took 45 solid minutes. 45 solid minutes alone, with my baby, whom I loved dearly, but whom I was already alone with all day. Every day.

I had so looked forward to this event. It was going to be refreshing to be dressed up, be out in the world—a world I so dearly missed the previous six weeks. I was excited to talk to people. To socialize, have a glass of wine, and show off my new baby. I did not realize how much time I would be spending away from the party. And I was the person in the room who needed that party the most.

It is now seven years later. I recently hosted a girls’ night at my house and a friend brought her new 1-month old baby. When it was time for her to nurse, she pulled out her trusty cover and began to put it over her head. I told her that if she felt more comfortable with it, then she should use it. But that she did not need to at my house, with my friends. She was so relieved. She was able to feed her baby, stay in the room, and enjoy the entire evening—something a mom with a new baby so desperately deserves.

I think people often lose sight of what’s truly happening when a mom needs to breastfeed her baby. I think that people who are uncomfortable with it and feel that the mother should hide behind closed doors are misunderstanding the situation. You see, if a mom is about to feed her child, what is going to take place for the next 20-30 minutes is not about you. It has nothing to do with you. What is taking place for the next half hour is a child eating. And a mom providing. But also, chances are, that mom is also living. Or at least she’s trying to.

Please don’t offer a breastfeeding mom a room down the hall—unless she wants privacy. And if she does, give her a room with a tv or some good books. And as soon as she re-emerges, offer to hold the baby and hand her a full glass of wine. Invite her into your conversation. Tell her she looks great. This event might be a far bigger deal for her than it is for you.

Why Opting Out of Breastfeeding Was the Best Thing I Did
3 things I wish I’d known about breastfeeding before I started
Breastfeeding versus Bottle Feeding. Remember, FED is best!
advertisement

Why Opting Out of Breastfeeding Was the Best Thing I Did
3 things I wish I’d known about breastfeeding before I started
Breastfeeding versus Bottle Feeding. Remember, FED is best!