4 Reasons Why We Thank Our School Crossing Guard 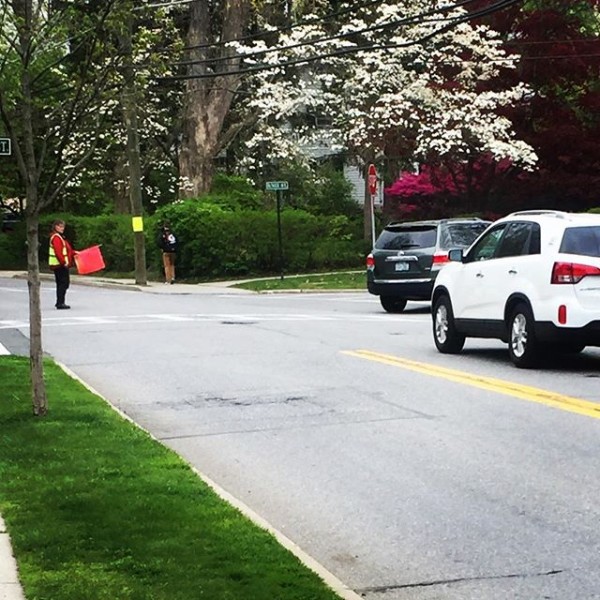 During the school year, I sometimes tag along with my two boys and the local crew on their 3 block walk to school. One morning, as we approached the 4-way, main street intersection where the library, high school and last stretch to the elementary school meet, our young neighbor turned to the boys and whispered, “If you don’t say thank you to Doris the world will blow up.”

Doris is a pillar of our sleepy, suburban town and a force to be reckoned with at that. Torrential rains, icy roads, blaring horns, and testy commuters can’t stop her from parading dead center into this congested intersection during school drop off and afternoon pick up to yell, “Crossing!”

A sentinel for youngsters and teenagers, siblings in strollers, parents and pets as they travel to and from parked cars, school, practice, religion, and home; pedestrians welcome her presence.

Many drivers do not. They are forced to sit, wait and wait some more until Doris releases them with a flick of the neon flag. Held up for work or a midday appointment; some grumble, honk, and huff. Others rant on social media; the rest stress in silence.

I get it. There was a time when I dropped the kids to school on route to work and inched my car too close to Doris’s east end cross walk. She took one look at my tires, locked eyes and stepped off the corner. “Hey, don’t you see children here?”

Jolted from my to-do list daze, I sputtered an apology. “Sorry Doris. It won’t happen again.”

I got over it. We regular walkers know something about the way our school crossing guard approaches her job that drivers may not notice from behind the windshield.

Doris teaches children the value of a greeting.

My little guy first met Doris when he was three. Every day he watched her from his wagon as I wheeled him across the street on the way to his big brother’s school. Doris was never too busy to say “Good morning.”

As they developed a rapport, she added compliments about his smile, noticed haircuts, and congratulated him when he was able to walk the distance sans carriage. Doris showed my son respect. He reciprocated the sentiment.

Now, not a morning goes by on this 1st grader’s way to elementary school that he doesn’t wish Doris a good day. The same holds true for many middle and high schoolers who take time to look away from friends and up from phones to say Hello, leading me to believe her lesson has been repeated before.

She models generosity of spirit.

New to the district, I was shocked to see Doris sitting in the audience of my son’s class play. The parents who had older children were not. As it turns out, she does her best to attend each of the roughly 24 performances held annually at the elementary school.

And during the holiday season, those who walk her way will find Doris’s open car trunk spilling with free cookies for the kids.

Such gestures are not taken for granted. When a few families found out she was having a birthday, moms spread the news on Facebook. The next day, her “office” was decorated with signs, balloons, flowers and handmade cards.

She gives parents peace of mind.

My big guy often walks with our young neighbor long before his brother and I head out for the morning.

One day, Doris stopped me. “Your son and his friend are good walking buddies,” she said. “They walk, talk, there’s no fooling around and they follow the rules.”

Even though she and I have only exchanged pleasantries, Doris knew which child belonged to me and took the time to report he was making good choices.

And reminds us to take it easy.

Doris was cut off mid sentence during one of our pre-pick up exchanges by a speeding car. “What are you doing?” she hollered at the blurry sedan. “Where do these people think they’re going in such a hurry?”

I smiled and shook my head. “Doris, I don’t know.” I continued onward, slowing my gait for the last block and a half to my destination feeling confident that, after spending my few moments with this special lady, the world was safe from annihilation for one more day.

It takes a village to shape a community. “Thank you, Doris.”

Teacher Appreciation Week: Lessons From A Crossing Guard
The Grass is Always Greener for Moms
Walk Away Know when to pull your kids closer, and know when to walk away.
advertisement

Teacher Appreciation Week: Lessons From A Crossing Guard
The Grass is Always Greener for Moms
Walk Away Know when to pull your kids closer, and know when to walk away.