256 days: From surviving to thriving

It took my husband and a I a little while to get pregnant. There is a history of PCOS in my family and I wasn’t spared. It took several combinations of medications to get us there in a little over a year with no shortage of tears and frustrations. On March 8, 2018 I got the faintest positive on a pregnancy test. A week later we went in for an ultrasound and our nurse gave us the shock of our lives: twins.

My pregnancy was not an easy one. I vomited multiple times a day for pretty much the entire time. At 11 and 13 weeks I bled abundantly, both times assuming that I was miscarrying. They could never find the origin of the blood and both babies continued to grow. Despite my morning sickness and bleeding, we went into our 20 week anatomy scan assuming that things were perfectly fine. They weren’t. 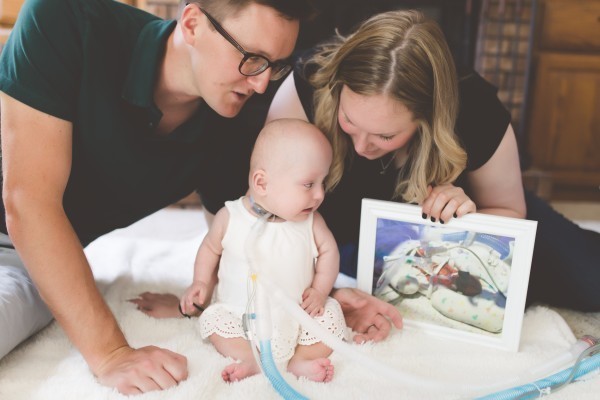 We could tell during the scan that there were two heartbeats, four arms, four legs, and two adorable little noses. After the scan, we were told that they were both measuring on the small side, and that we’d need a follow-up scan the next week with Maternal Fetal Medicine. I asked my doctor if we should be panicking and he assured me that he’s referring us “just to be safe.” The following week, after our scan, we were taken into a patient room to speak with the MFM. She explained to us that both of our girls had inconsistent blood flow to their placentas. They were growing much slower than expected and not receiving what they needed from me. They were diagnosed with intrauterine growth restriction (IUGR) from intermittent absent-end diastolic flow, a condition that the MFM said that she rarely saw this early. The course of this diagnosis typically results in early delivery, but I was just barely 21 weeks along. The MFM said that our new goal was to get to viability, 25 weeks, and the likelihood of one or both girls reaching viability was approximately 50%. I was instructed to drink a ton of water, eat protein, and return for weekly Doppler scans to monitor blood flow. When the blood flow was determined to have stopped or reversed, I would be admitted and the girls would be delivered as long as we reached 25 weeks or the girls measured around 500g (1lb). We were devastated and, in hindsight, had absolutely no idea what delivering a 25 weeker meant, nor did we think about the complications that come with a baby born that small.

At 23+4 my blood pressure spiked and I was briefly admitted. We had our weekly Doppler and the MFM came again to share the details with us. This time, baby A was showing signs of oligiohydraminos (low amniotic fluid) and further growth restriction, measuring in the 3rd percentile, only 340 grams (12 oz). Baby B was measuring in the 14th percentile and their roles had switched - her blood flow was a bit stronger and she continued to grow ever so slightly, measuring 420 grams (14.8 oz). Neither baby was viable. I was discharged from the hospital and we met with a neonatologist who matter-of-factly told us that if I could get them to 24 weeks, he would do everything he can to try to save them.

The following week, on August 8th, we returned for another Doppler. The ultrasound techs were usually talkative and cheery during the scan, but this tech was silent. My husband held my hand and we waited patiently as she scanned each leg, arm, little nose. After about a half hour, we heard exactly what we were mortified to hear; “I’m so sorry, there’s no heartbeat.” Baby A, our strong, beautiful twin, had passed some time in the five days between my admission and the scan. Baby B’s blood flow had reversed, which we were told was very dangerous, and I was immediately admitted for monitoring. I was given steroids and magnesium to give her strength, and the plan was to give her a few days to gain the effects, but we had to be diligent to watch for signs of distress and deliver as soon as possible if she went into distress.

Because of the cord flow issues, she was not yet considered viable. The neonatologist came to visit again and told us that she had to be around 500 grams (17.6 oz) to be intubated...so we were prepared that given her measurements at the last scan, that her shot at life was about 5%. A five percent chance that my one surviving, beautiful little peanut would see this life.

My parents rushed down and together we spent Wednesday through Saturday crying and staring nonstop at her heart rate monitor, hoping that she’d be big enough to intubate and live. On the morning of Saturday, August 11, I went into a c-section and first delivered our beautiful Baby A, and then the loudest, feistiest 504 gram (17.8 oz) baby girl that the NICU team had ever seen. We named her Lily Margaret. Surprisingly, Lily didn’t need to be intubated immediately. She breathed on her own for about an hour and a half and was literally screaming at the nurses for some time before heading down to the NICU. When the neonatologist explained to us that there was a 5% chance that she would survive, we didn’t know the road that we’d travel down to get past “surviving” and make it to “thriving”.

We spent 256 days in the NICU. 256 days filled with uncertainty, sadness, fear, and anger, but also moments of sheer beauty and joy; her first bath, first clothes, first bottle, holidays, and development of friendships that will last forever. We learned to lean on one another in way that we never thought possible, and looked to the strength of our friends and family to help us just survive from day to day. When Lily was one month old, she had an exploratory bowel surgery because she had not pooped since she was born. It took weeks of enemas, contrast studies, and medications to arrive at the decision to operate. At the time, we had absolutely no idea how risky it was to operate on a 1 lb baby. Her heart stopped (“coded”) on the operating table and she was brought back to life, but we were so blinded by everything going on, that the magnitude of this surgery took months to process. The week after surgery we almost lost her again. Her lungs had become increasingly damaged by the ventilator that was keeping her alive, so much so that she maxed out the support that the vent could provide. The team put her on a high frequency oscillating ventilator for a week, to help deliver pressure support that she needed, but with the hopes that she’d ultimately require less support. This week was extremely difficult as we were, yet again, briefed that she may not make it. I did lots of research on other treatments, and the team agreed to trial low-dose steroids to help her lungs grow in a short amount of time. She responded well to the steroids and was able to return to the traditional ventilator.

As a result of her first surgery, her small intestine was disconnected and she had an ostomy for three months; a section of her intestine was pulled through her stomach and the rest of her intestines were left to rest and grow. In December she had her bowels reconnected and she lost minimal bowel. This is our biggest victory in that all she will have is a gorgeous abdominal scar to show for months of pooping out of her belly. 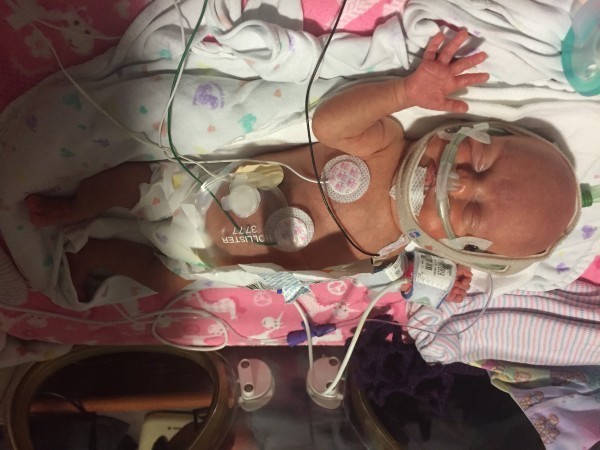 We worked for months on extubation to CPAP from the endotracheal tube and we were ultimately unable to extubate her without serious repercussions, such as dangerously high CO2 and apneic episodes. Some of these episodes resulted in resuscitation - seeing my child turn blue and require chest compressions is something that I wouldn’t wish on anyone. She had been ventilated for so long and her little lungs were so scarred and damaged. In January, after nearly 5 months of being unable to extubate, Lily had a tracheotomy to create a semi-permanent hole in her trachea to help her breathe. She has a tube down her trachea, secured around her neck, and connected to the vent. Before the trach, she had to be sedated so that she wouldn’t rip her tube out, so now that she has this more stable airway, we can begin working on all of the milestones that she missed while she was very sick. During this surgery, she also had a G-tube placed for us to use while we work on introducing oral feeds. 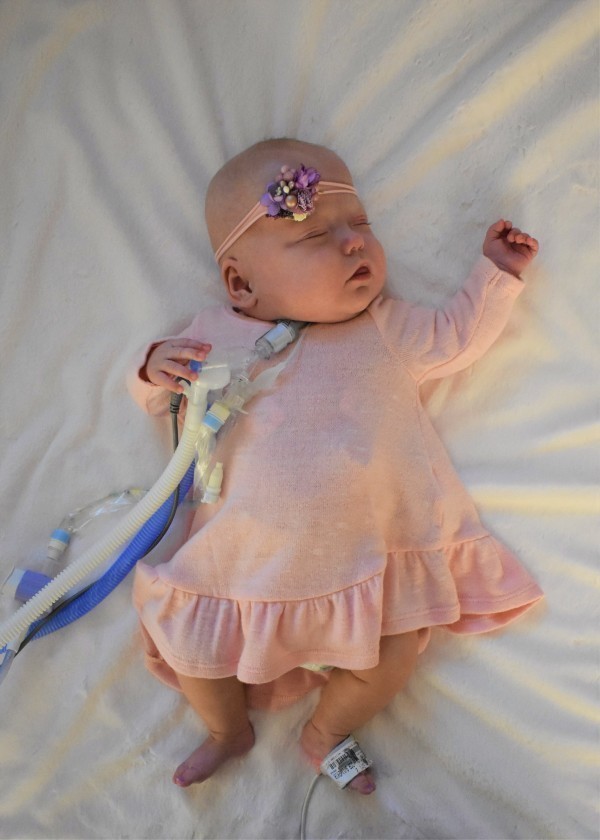 The decision for a tracheotomy was not an easy one for us as it requires around the clock eyes on Lily because the trach can occlude or pop out, making her unable to breathe. We have gone through incredibly extensive training in order to care for her, and we have nursing care in our home 3-4 days per week (we’re entitled to 12 hours a day but there is a nationwide home health nursing shortage). We are lucky that several of our NICU nurses are providing our in-home nursing. While the medical side of this has been extremely scary, the trach is allowing her to do things that we always knew were in there - she can now sit independently, roll, grab toys, and is working on pulling herself up. She’s been evaluated by neurologists and developmental pediatricians who feel that with time she will catch up and shouldn’t have many long-term developmental needs. 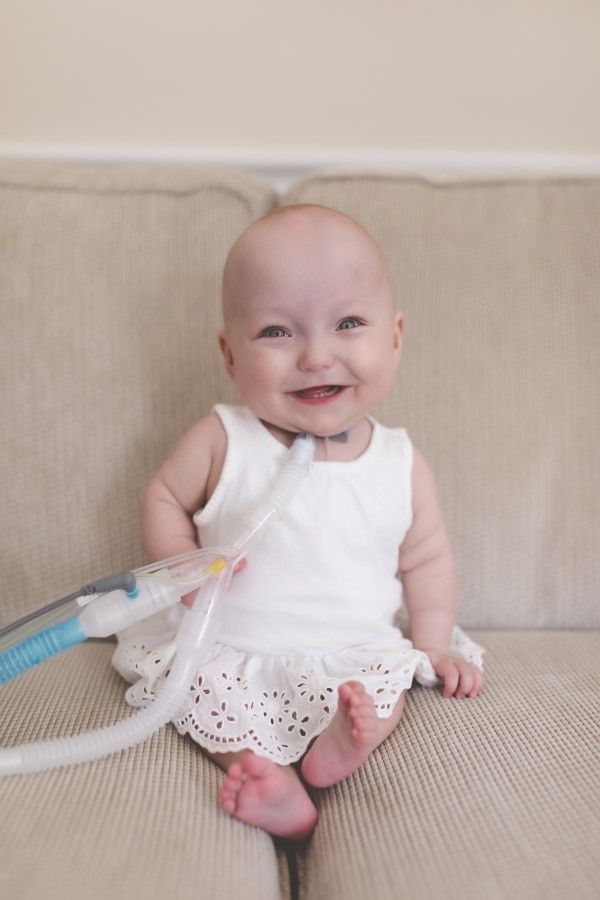 We have weekly speech therapy, physical therapy, developmental therapy, and occupational therapy. She has monthly pulmonology appointments to evaluate her lung maturation. The goal is total decannulation by kindergarten, if not sooner. She’ll have intensive speech and feeding therapies because the trach makes it very difficult to speak and eat, but we’ll learn. She vocalizes so well over her trach - I have no doubt that in no time she’ll be screaming at me to bring her lunch!

This has been the most difficult year that we could have ever imagined, but we walked out of the NICU with our living miracle. This chapter tested our marriage, love for one another, and taught us that we can rely on our amazing family, friends, and hospital staff who became family. Severe chronic lung disease, a bowel perforation, 3 surgeries, 5 life-threatening infections, 4 code/total resuscitations, sedatives, paralytics, 1 MRI, 7 echocardiograms, 150+ x-rays, and millions of dollars later, we’re finally home. Lily is thriving and has shown us true strength and perseverance and we have been in awe of her every day since. 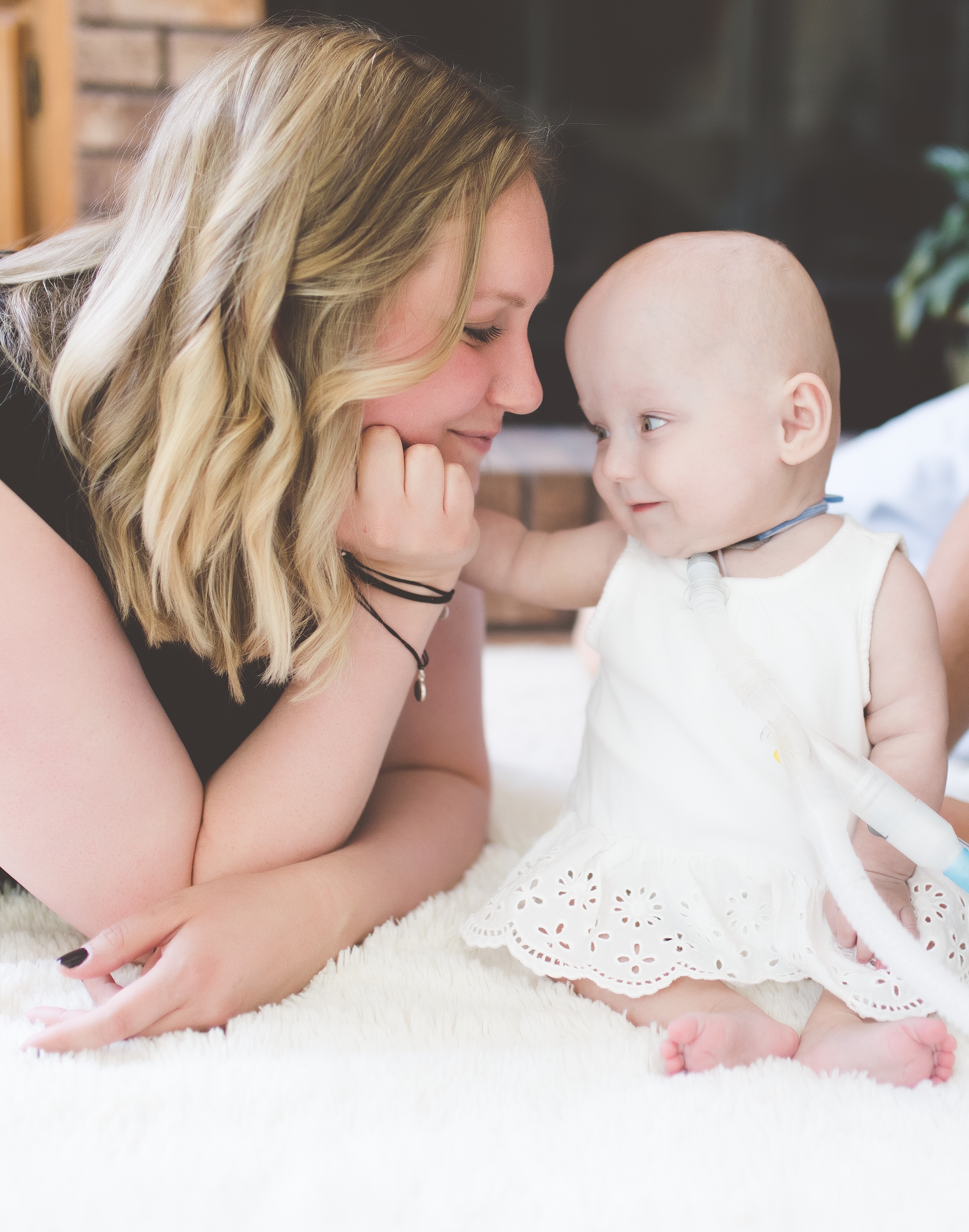 “The Best Laid Plans...”
25 Years Ago, We Asked to Put Our 25 Week Twins on Our Chest; We Were Told No
My 1 lb 6 oz alligator
advertisement