UP IN THE NIGHT AND CHECKING FOR BREATH 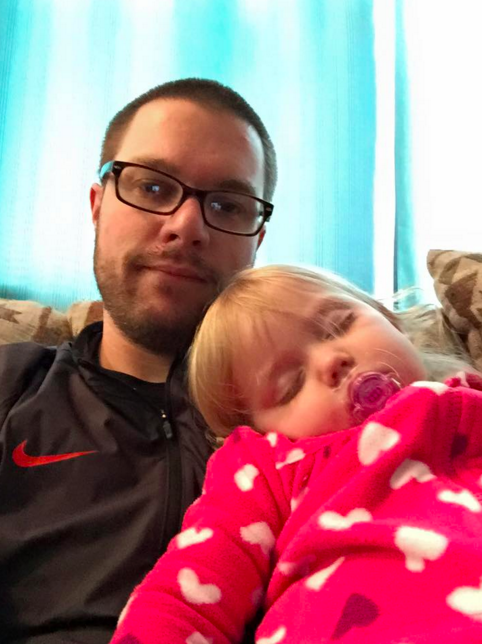 It was 5AM, one hour before I needed to be up for the day, and none of my three children had woken me for the past 7 hours. It was dark, Mel, my wife, was asleep, and my first emotion was relief. It felt wonderful to have had 7 hours of undisturbed sleep, something that, with small children, almost never happens. But then I was terrified.

I often talk with other parents about how amazing it would be for my children to let me sleep through the night without waking and asking for a blanket, or a glass of water, or to get up for a snack at 3 AM. I want a restful night so badly, and yet, every time it happens, every time the kids sleep more than five hours without waking me for this or that, it seems so unusual, that my first assumption is that they are dead. In the night, when I'm weary and prone to fear, I always assume the worst.

I stayed in bed for a moment, telling myself that the kids were fine. They just happened to sleep through the night, it happens sometimes. I always tell myself this, and it never works. I can never go back to sleep because I am scared. Because I love my kids, and the thought of them going to sleep and not waking up is one of every parent’s biggest fears.

So I crawled out of bed, and checked on Aspen, our four-month-old, first. I leered over the bassinet for some time, trying to see if her chest was moving. However, it was dark, and she was swaddled, only her face sticking out of the blanket like a little glow bug. I didn’t want to touch her because, if she was alive, then she’d probably wake up, and I would have ruined a good thing. But I couldn’t go back to sleep without confirming that she was okay. I leaned in slowly, put my finger under her nose, and felt for breath.

She was breathing. I was relieved.

I moved into Norah’s room, our five-year-old.

She was on her stomach, her arms and legs sprawled out, body slight twisted, back arched. Her kitty quilt was bunched up at the end of the bed. I really didn’t know how someone could sleep like that, which only fed my fears. Once again, I didn’t want to wake her, so I hunched down, level with the bed, and attempted to see the back of her shoulders moving up and down. It didn’t work. I don’t know why I always try this. Sleeping kids hardly move. I’ve learned that over the past few years.

I couldn’t really get my finger next to her face without leaning over her body, and that seemed like a sure fire way to wake her, so I placed her quilt over her body hoping that she would move.

But she didn’t, and I freaked out a little. I started having terrible thoughts.

I was about to nudge her, take my chances with waking her and getting her back to sleep, when she let out a long moan, and then shifted positions.

Once again, I was relieved, and moved to Tristan, my 7-year-old.

I wasn’t as worried about Tristan. He was seven, and he usually sleeps through the night. But I felt it was best to check on him anyway. I walked into his room. He was curled up in a ball, his quilt on the floor, wearing nothing but Sponge Bob underwear. I don’t know what it is with my kids and sleeping in strange positions and losing their blankest, but I digress.

Rather than check his chest, or feel for breathing, I just nudged him. He grunted, put his head up to look at me, and then said, “Go away.”

I placed the blanket over him and went back to bed.

I felt a mix of relief and frustration. Obviously the kids were fine. I could’ve stayed in bed and slept, but as a parent, I couldn’t help but give into an irrational fear that always seems to happen when my kids sleep too long. This really is one of the catch 22’s of parenting. I want sleep, but when I get sleep, it seems so unusual that

I assume the worst.

Eventually I drifted off, only to be woken a few moments later by my alarm. I got up, dressed, and left for the day.

If you enjoyed this post, you'd love Clint's new book This Is Why We Can't Have Nice Things (Parenting. Marriage. Madness).

Take Your Bedroom Back... Or Not
The Night Invaders - How I Took Back My Bed
Sometimes we just forget
advertisement

Take Your Bedroom Back... Or Not
The Night Invaders - How I Took Back My Bed
Sometimes we just forget