To the men who cry

Published by Carrie Cariello on July 2, 2021

My name is Carrie.

I am married to a man named Joe. We have four boys and one daughter.

Our second son, Jack, is diagnosed with Autism Spectrum Disorder. He is seventeen.

Let me tell you a few things about my husband Joe.

He doesn’t have a middle name.

He gives the best hugs, and he always, always orders calamari when we go out for dinner.

He is a Forever Father.

For nearly seventeen years, he has sat through doctor appointments and academic meetings and listened to all the things his complicated son won’t do.

He never says much. He just clenches his jaw and looks down at the paperwork and clears his throat.

Then he walks out the door and into the sunlight. He squints against the glare, and he figures out a plan.

See, my husband is a fixer. He wants to solve things.

He wants to teach his son everything there is to teach, and stretch him beyond the spectrum bounds. He is determined to defy the odds.

When Jack was in first grade, Joe stood at the end of the driveway for an entire year and waved until the school bus was out of sight, hoping that just once, Jack might turn around and wave back.

The thing is, a mother’s grief is loud and colorful. It takes up space. It fills the room.

A father’s grief is quiet. It is internal. It is hard to see, or know.

It’s easy to forget about the father, is what I am trying to say here. I know I do. I forget that he had hopes and dreams all his own when it comes to his son and our family and the future.

It’s easy to forget how, through the ages, men have been told they have to be brave, and stoic, and strong. They are not supposed to show emotion, or be vulnerable, or cry.

Last week our town held a vigil for a 15-year old boy gone too soon.

Throughout the ceremony, my husband could have stood tall, kept his shoulders back, and held his head high.

He could have gritted his teeth and told himself this was happening to someone else.

He wept in front of colleagues and soccer coaches and fellow tough guys.

He wept in front of high school football players, and middle school teachers.

He kept his shoulders back.

He held his head high.

He wept with his son by his side.

He wept for a family not unlike his own.

Life is full of a million special moments, and a thousand small hurts, all mixed up with tender mercies.

Which is a stupid way of saying life with children is messy and ordinary and terrifying.

We yell about crumbs on the counter while a voice inside tells us it doesn’t matter because all that matters is everyone is safe and healthy and happy.

We yell anyway and when we go to bed we feel like terrible humans and wonder why, why, we didn’t kiss their soft cheeks or adore their teenage faces or sit down at the counter and hear their voices instead of wiping away the goddamn crumbs.

Then we wake up, and do it all over again.

In this life of ours, we work hard to make sense of what is expected of us, and who we actually are.

We worry about what’s coming, what’s next, what we should do after the thing we just did.

It’s only when we look backwards that we begin to understand it at all.

He waited for a year.

The last week of school, a tiny wave from the window of the bus.

To my husband Joe-with-no-middle-name, and every other man who has grieved, and wept, and hoped, and tried.

I see you in the stillness.

I see you in the heartache.

As you set your armor aside and face the world with a wide, wild heart, just know.

There are young eyes upon you. From you, they are learning how to become men. 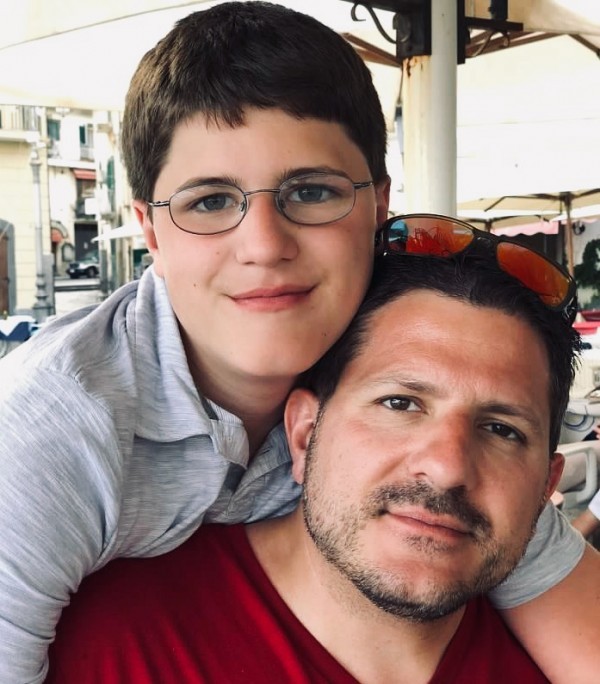