Things That Keep a Mother Awake at Night 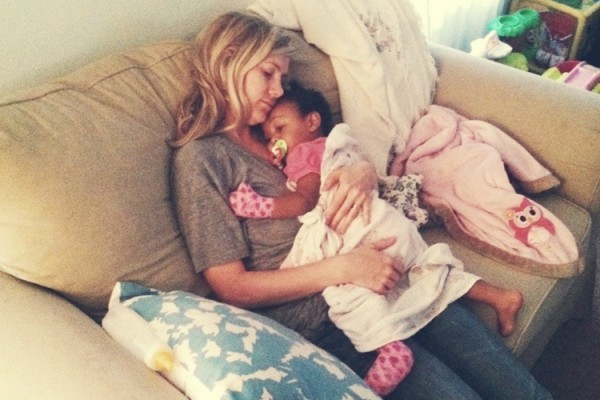 Our son was nearly five months old when we brought him home on a chilly Thursday evening in February. After nearly 30 hours of international travel, including a four-hour drive from the airport to our front door, we bathed the baby, each took a hot shower, and collapsed into bed. Mareto slept in the basinet next to us and we woke every two hours to either feed him or sooth him back to sleep and check his labored breathing.

The next day we were in the children’s hospital getting him the medical care he so desperately needed while the doctor laughed at our jet lagged state. Back home we went and all three of us were sound asleep by 7pm. Then up every two hours until morning. It’s really hard to recover from jet lag when you’re waking up every two hours. A week later my husband left for three days. The trip had already been rescheduled twice due to our travel for the adoption, so we couldn’t change it again.

The first night he was gone I called his cell at 11pm in tears, “I’m so tired!” I wailed. “What were we thinking? I can’t do this for eighteen years!” John laughed sympathetically and reminded me that Mareto wouldn’t wake up every two hours for the next eighteen years and that I would be long recovered from jet lag by then as well. It was the dose of common sense I needed and it allowed me to settle down and fall asleep. Just as my husband predicted, the jet lag passed within the following days and our son eventually began sleeping for longer intervals.

Five years and one more little one later I’m realizing that there are a lot of things other than a crying baby that keep mothers awake at night. And these don’t all disappear in eighteen years. After the baby months pass there are the standard sleep inhibitors: someone wet the bed, or had a nightmare, or needs a drink of water, or puked on the sheets, or randomly woke up for the day at 4am. But even when the kids are tucked in and stay in their beds until the sun comes up, moms still sometimes lay awake at night.

We run through the events of the day in our mind. Questioning ourselves and our decisions, wondering what we could have done better. We scroll through the to-do list and mentally add items we forgot about during the chaos of the day. We relive the parent-teacher conference or doctor’s appointment and in the quiet of the night we finally have the chance to really think about the notes made and recommendations given. We realize we forgot to remind the kids to brush their teeth and feel a little guilty about how much junk food we let them consume that day. We tell ourselves we’ll do better tomorrow.

Some of us worry about the medical bills and insurance calls we need to make. We tell ourselves that it’s time to try a new therapy because in the still of the night we have the time and space to consider all the options. We worry about the possible side effects of a new medication and weigh the risk and reward of every decision we make for our children.

We think about school and the bake sale coming up. Shoot, we forgot to bake cookies – store bought it is. Then we try to remember if we made sure homework sheets were completed and hope our children are learning and engaged and happy and safe while they’re at school.

We stop ourselves from letting our minds go down the rabbit trail of worry because once we start we can’t stop. We go from the day to day issues to the big world problems. We wonder what kind our world our children are going to grow old in… it seems to be blowing up around us. We try to keep the TV off and the computers shut down while little eyes and ears are around. There will be plenty of time for them to learn about the evil in the world later. We wish you didn’t know half of what we do.

My mind turns to my friend who’s just received a horrible diagnoses and I wonder what her thoughts are tonight as she lays in bed. Then I think about her mother and somehow know she’s up tonight too, thinking about her grown up child.

Sleep will elude mothers all around the world tonight. Some will be feeding infants and changing diapers. Others will rock and snuggle frightened children. Some will be playing the bedtime stall game, getting water and telling just one more story. Some moms will be wide awake waiting for the door to click and tell them their teenager is home safe and some will be on the phone calling anyone and everyone who might have seen their child who ran away yesterday. Some will wait by the front door to hear all about the prom or that first date and some will sit up late with the ice cream and tissue box comforting a first heartbreak. Other moms are reclining by hospital beds and watching every flash and beep and some just got a phone call that made their blood run cold. Some moms are tired but too excited to sleep after a night of celebrating a college acceptance, a new grandchild on the way, or the engagement of their first child. Somewhere in the world there are moms wondering how they'll feed their children tomorrow and if they'll all be safe. And some moms just can’t stop rolling through that to-do list in the middle of an overwhelming week.

When I became a mother I gained my amazing children and lost a good night’s sleep (for a multitude of reasons.) And that’s okay, because as someone once told me, kids are better than sleep. It’s true, but I sure could use a nap. And another cup of coffee.

5 Ways To Clean Up Your Family's Sleep Tonight
Avoid Toddler Jet Lag On Your Vacation Abroad
Now That the Baby Is Sleeping...10 Ways Parents Can (and should!) Get Better Sleep, Too
advertisement

5 Ways To Clean Up Your Family's Sleep Tonight
Avoid Toddler Jet Lag On Your Vacation Abroad
Now That the Baby Is Sleeping...10 Ways Parents Can (and should!) Get Better Sleep, Too