How My Dad Became a Father at the Age 70 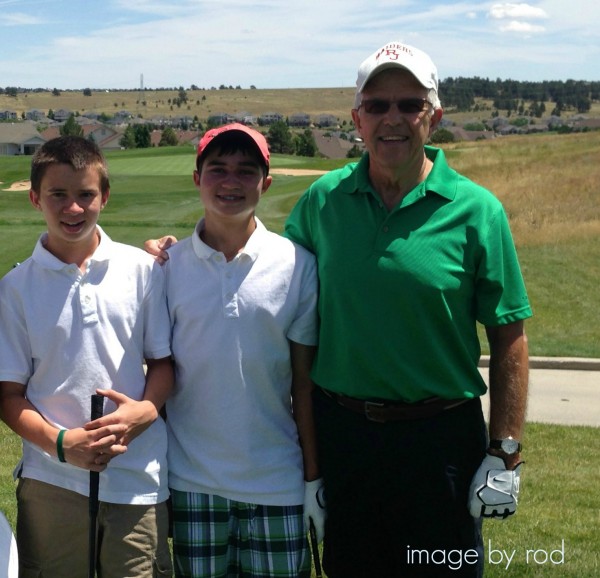 Gotcha! I do not have a half sibling with a 45+ age difference.

My dad, by upper middle class norms of the 1980's and by his own guilt- ridden conscience was a workaholic father. He worked most days and evenings as a high level healthcare executive. He was at the forefront of how hospitals and insurance companies manage patient care. We didn't know what he did for a living we just knew he left the house when it was dark outside AND he "got to" eat in the hospital's cafeteria. When we would go into the "office" on the occasional Saturday we looked forward to the white boards in the conference room and the office phone with all the buttons. And, who are you going to call when you are 10 years old? MOM! ! We would spend the second half of the morning calling our mom asking her what she was doing and fighting over the chance to talk to her. Years later my mom shared how she didn't get much done in those precious hours, sans kids, because she answered endless phone calls as we fought over who got to talk to mom.

In the evenings, my dad worked at our kitchen table- a 1980's version of the mobile office of today. I was convinced he conveniently worked at the table to make sure the floor was swept ( a chore I still hate to this day). With a stack of black and red felt tip pins and a large yellow notepad, he would settle in at the table after the dishes were cleared. Although an early version of the Apple home computer was conveniently set up on a card table in the basement, my dad preferred the pen in his hand instead of a keyboard under his finger tips. I get it. I love a new paper calendar and lined notepads with a stack of pens and highlighters.

My dad spent most of his "free time" working and/or supervising yard work on Saturdays. I think in many ways the lawn was his therapist. He could rake, trim, edge, and sweep his way through his thoughts and worries. And, he was probably doing a little praying. I get it. Personally, I dreaded Saturdays because it meant we were either working in the yard or cleaning the interior and exterior of the cars. He used the hot summer afternoons for one- on- one conversations with us kids while doing such mind numbing chores as sorting the bark from the lava rock (it was the 1980's). I dreaded these "convos" because it usually meant my dad did not appreciate my non-linear lawn mowing skills. He skillfully used this time as an opportunity to question us separately to figure out who spilled Koolaid on the {shag} carpet in the living room. In later years, the questions usually involved missing (or diluted) alcohol or a mysterious car dent blamed on a hyper-active raccoon.

This is where the narrative changes. As distracted as my dad was as a father an amazing thing happened when his children had their own children: he was given a second chance. He knew this time around it was not to be taken for granted. And with this second chance handed to him {literally} in the form of a grandchild or a grand puppy, my dad became a dad who was present.

We encouraged him to look at his grandchildren as an opportunity to be the father figure he wish he had been for his children. Without the weight of full time work on his mind and body, he was free to open his calendar to the park, putt-putt golf, swim meets, tennis matches, gymnastic lessons, movies, golf, trips, dog sitting and meals with his grandchildren. He became the father we never knew was in him and I don't think he knew either.

As a grandfather, my dad has an appreciation for his grandchildren's personalities which was missing in our conservative, Catholic upbringing home. Over the years, he learned to listen to the opinions of his grandchildren. He now celebrates the inquisitive minds challenging his preconceived ideas. What? This never happened when we were teenagers. For example, after a trip to the Holy Land and the subsequent 2 1/2 hour slide show my parents set up, my youngest son interrupted with questions, "Grandma how do we REALLY KNOW this is where Jesus 'ended up' ?" I would have been grounded for a week if I challenged church doctrine. Seriously.

Large families, by their vary nature, generate drama and we had our share of drama filled holidays. I believe my dad understood some of the issues in our big, Catholic complicated family and with a little encouragement from me and my sister, we gave our dad permission to laugh at the complexities of a Catholic family. And with this new found insight my dad found a way to connect with his daughters.

Today, the three of us our big fans of Downton Abbey and we started a Monday morning "quarterbacking" session with our dad. My dad emails us every Monday with his summary, observations and the historical context of each episode. Most recently, we started a Father Daughter Book Club.

My dad doesn't know I have a blog. It would take me dozens of email exchanges to explain what is a blog and where can he download it. In honor of my dad, I recently purchased a stack of yellow notepads and felt tip pins. Like him, the written word calms me gives me peace, happiness and perspective.

Not a Trophy Wife
> See my posts
> Visit my blog

I have opinions, but just like my weight, my opinions are subject to change. I am a medical device manufacturing(in the US)small business owner, mom to a math-lete,rugby and tennis players. I affectionately refer to my husband as my "first husband."