Why 'This Is Us' Is As Real As It Gets

Published by Stacy Feintuch on February 8, 2018

SPOILER ALERT: If you haven't watched the latest episodes of "This Is Us," go check them out, and then read on!

Did Rebecca just say she makes lasagna? That's what I make.

It took me a second to catch my breath, then I picked up my phone, but before I could type, I heard the "ding" of an incoming text.

It was from my daughter, a freshman in college, who was watching the exact same episode of "This Is Us" that I was. It was THE episode, the one where we learn how Jack dies.

"Yes. I was just about to send you the same text. Are you OK?" I responded.

I had been hesitant to watch this episode. I knew it would be hard to watch when Jack dies, but I was not prepared for the eerie similarities to the day that my daughters and I lost my husband.

I had set my DVR, planning on watching it at another time; not so late at night, not right before bed, not when I was alone, not when I had to go to work in the morning. My head gave me every excuse in the world not to watch this episode, but the truth is, I was going to watch it no matter what. I am so invested in this show that I couldn't miss it. I wanted to see what happened to Jack. I would watch it in real time.

I turned on my TV convincing myself that yes, he dies, but the circumstances were different. Jack dies in a fire, my husband had a heart attack. Plus, the Pearson kids were much older than my girls, who were only 10 and 12 when they lost their dad six years ago.

This episode turned out to be much more like my own experience than I expected. 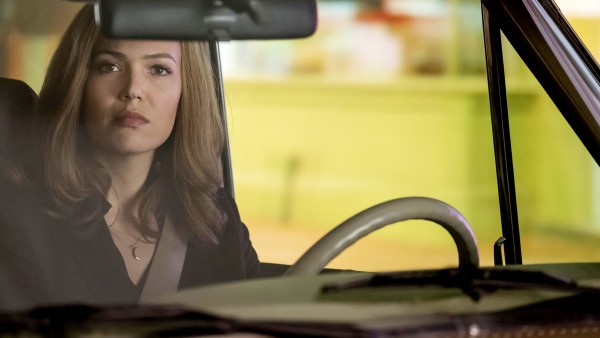 "This Is Us" photo credit: 2018 NBCUniversal Media, LLC

Rebecca talks about the lasagna before we even see what actually happens to Jack. This was the first point in the episode where my eyes widened in disbelief. Lasagna happens to be the best thing I cook. My husband loved it, so on every anniversary of his death I make it for us as a tribute to him. My girls bake his favorite Duncan Hines yellow cake with chocolate frosting.

A few moments later, we see that Jack does not die in that fire like we assumed. Instead, the Pearsons were lulled into a false sense of security when he makes it out.

It was when Jack has an unexpected heart attack and dies in the hospital that I saw myself in almost every move Rebecca makes.

The disbelief that Rebecca exhibits was so dead on it was incredible. She beats herself up for taking that bite of the candy bar when she is told her husband has died, but I know from experience that it has not registered yet. His death is so out of the realm of possibility that her mind just cannot accept it. It is not real to her, so why not take that bite?

When she sees Jack's body, and realizes that it really is true, she falls to the floor. So much of what I remember from my horrible night in the emergency room was being on that cold, hard floor. It is as if your legs are not strong enough to handle what your mind is taking in.

The scene that affected me the most was when Rebecca goes home to tell her children. I walked that same walk up to a house, knowing that what I was about to tell my girls would change their lives forever. Like Rebecca, I insisted on doing it myself, and I also needed to do it without crying. I would only allow myself to "lose it" when I was alone.

How did she do it? How did I do it? How could anyone in that situation do it? The answer to that is that we are mothers. You gather a strength that you never knew you had so that you can protect your children, even the tiniest bit, in a situation where nothing can really protect them.

Rebecca and her children then go to sleep cuddled together, just like we did.

When the episode was over, I realized that I had watched the second half of it curled up in a ball. While still in that ball, I sent another text to my daughter.

My first instinct is still to protect, but now I see that my daughter is also trying to protect me. Just like Rebecca and the Pearson kids now try to protect each other.

"This Is Us" is an incredible show. The truth that the writers and actors were able to tell through these characters was so spot on. I felt myself through Rebecca, and yes, it was upsetting, but I am glad that I watched. It brought me a strange sense of comfort. I am looking forward to seeing more of their story unfold.

What 'This Is Us' Means to My Family
"This Is Us" Gives Words to My Feelings as an Adoptive Mom
Parenting Life Lessons from Mandy Moore, Milo Ventimiglia & the Cast of 'This Is Us'
advertisement

What 'This Is Us' Means to My Family
"This Is Us" Gives Words to My Feelings as an Adoptive Mom
Parenting Life Lessons from Mandy Moore, Milo Ventimiglia & the Cast of 'This Is Us'