Why The Messy Middle is My Favorite

Published by Kirsten Piccini on August 7, 2015 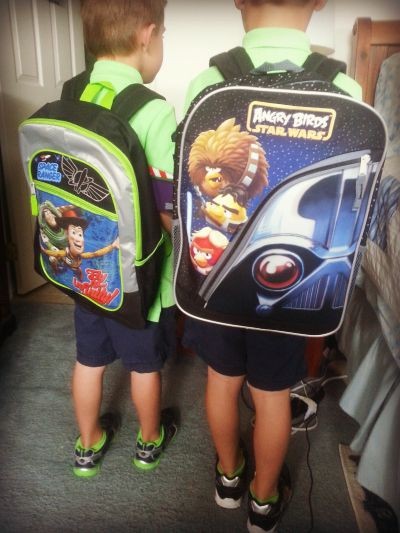 I’m not really one of you.

I remember to shop for back to school and I allow my children to pick out their backpacks and help me sharpen all the pencils before we arrange them in new cases. I even try to remember that the first day back to school is symbolic no matter what grade your child is entering but it normally ends up being a chaotic rush to get everyone dressed, that results in a hasty and blurry picture taken as an afterthought.

Perhaps it’s because there have been so many first days from the time my sons were born. So many mornings that would have constituted a new milestone or a fresh beginning. First day home from the NICU, a transition to a new room at the daycare, a move to a new school and away from the familiar routine only to find ourselves smack dab in the middle of a new normal.

In an effort to hold off the tears of my sons or worse, an avalanche of fear about the unknown I frankly didn’t have, I made little of those “first days” and instead treated them much like any other. And I was rewarded with children who didn’t cling to my legs as we stood on the street corner or hold my eyes as I waved to the bus. Instead there were wide smiles and small, jaunty hands waving back from behind the glass. I had little time to process since it was time to make the long commute into work and soon my thoughts would be on answering emails or all that godforsaken traffic.

And when I picked them up after those first days there was always reluctance in their faces. They had found their place, had grown accustomed, in those few short hours, to their new space. And I had arrived too early and disturbed their carefully arranged team or game. I was the outsider in this newest world even as my arms reached for them.

No, those first days came and went without any spectacular fanfare and unlike you I never reached for a pen to press words into paper or for the camera on my phone to highlight the passing of time. Instead we were busy, rushed for time with my fingers aching from of the deluge of forms to fill out and notes it was my duty to sign.

Instead I seem to acknowledge the firsts about a month in, when the kitchen table is littered with homework sheets and I can make out the waxy scent of crayons even while I’m cooking dinner. Polo shirts are stained with a mysterious red and I am holding my breath about the almost-but-not-quite perhaps-it-won’t-tear white mark on the knees of their they-were-just-new uniform pants. Sometimes I’ll look over my shoulder and see small fingers gripping a pencil and or a brow furrowed in determined concentration as a tiny voice sounds out word after word and be struck still.

That’s when I tend to reach for the camera to capture the moments of this new class and new year; when the seam of their backpacks begin to strain against the mountain of books it's required to carry. When we’re all in, for better or worse; those are the days I can’t stop the tears from falling from my eyes and streaking down my cheeks.

Those first days will come and go; it’s the messy middle that reminds me of the passing of time.

So I don’t fret if the pictures I take on the first day are blurry and out of focus, I have all year to get it right.

Kirsten Piccini is a daydreamer and storyteller who loves books, (too much) TV, cupcakes and high heels. She also harbors a deep affection for Broadway musicals, NYC and romantic comedies. She is a wife to a great guy and mom to seven year old twins born after a 4 year journey through infertility. That diagnosis brought her personal blog, The Kir Corner, to life. Her writing has been featured on BlogHer, BonBonBreak, Brain, Child, The Mid and Scary Mommy. A proud alumnus of the 2012 NYC cast of Listen to Your Mother, she is now the co-director/producer for the 2015 LTYM-Lehigh Valley show and was recently named a 2015 Voice of The Year by BlogHer.Follow Kirsten on Facebook | Twitter | Pinterest | Google + | Instagram | LinkedIn

The Moment a Shirt Reminded Me of the Heartbreaking Loss of My Child
Tell Your Kids to Be Nice to the New Kids at School
What Ever Happened to the School Locker?
advertisement

The Moment a Shirt Reminded Me of the Heartbreaking Loss of My Child
Tell Your Kids to Be Nice to the New Kids at School
What Ever Happened to the School Locker?