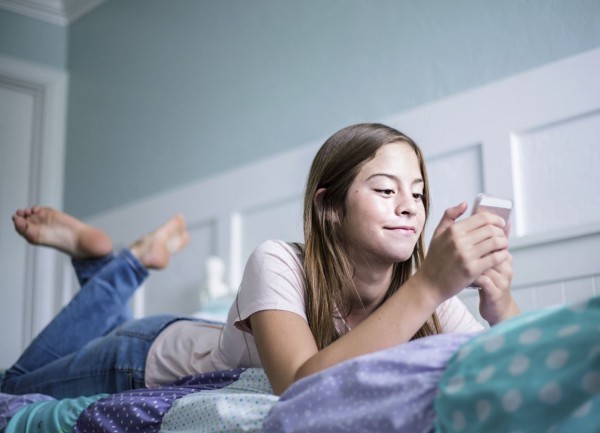 It's probably one of the most debated questions, when to give your child their first cell phone?

I have to admit, first, I'm very grateful I raised both my children before this age of technology, and second, my granddaughter started on me when she was 8 years old, about why she needed a cell phone.

Of course the first reason was because EVERYONE has one. Then when that wasn't good enough for me, since obviously I knew better, we moved to a more responsible one: Well, I could let mommy know when I was ready to be picked up or if there was an emergency.

Well, we're getting closer, I thought.

Now we get to the heartstrings.

"I could text you and call you more often. You know mommy doesn't let me use her phone, " she tells me.

Okay, let me start researching this.

Everywhere I went, from grocery stores, to the mall to even gas stations, when I saw parents with what seemed like 8-10 year old kids, I would ask them, "do you have a cell phone?" overwhelmingly the answer was yes! Honestly, I was shocked.

It was just shy of her 10th birthday when she was powering up her new cell phone. It was like a teen getting a new car! We have had many discussions about cell phone safety, entered the less than 10 contacts she still has today, and the monitoring systems still in place. Still today, we discuss online and cell phone safety and behavior as we approach her 12th birthday.

I will tell you it's 13 that scares me, since she doesn't have social media yet, short of YouTube, which she does love, she is not someone who is obsessed with her phone. As a matter of fact, I usually have to remind her to bring it so she can take pictures or she can call her mom or dad.

A new survey was just released, 40 percent of U.S. parents let their kids have their own phone by the age of 10.

In 2017, I wrote a piece for Washington Post, We need to be blunt: Talking to kids in the age of online shaming, where I mentioned how I gave my young granddaughter her first cell phone. My editor immediately questioned me before it was published, preparing me for backlash I may receive from readers. We did tweak the article to mention I lived in a small town area, to let people know that in my area this could be more of the social norm.

However more and more we are now realizing that kids are cell phone owners earlier and earlier. The survey shared that 65 percent of pre-teenage kids have a phone by the time they reach 13!

The genie is already out of the bottle. Many parents are developing toddler techies from age 2. This recent study said 28 percent of kids first use a cell phone at age 4 or less and 12 percent of children first use a phone between the ages of 1-2.

My granddaughter graduated elementary school in 2018. It was so inspiring when I heard her principal give a speech reminding the students that we don't live in Kansas anymore. In this digital age, what we do online, stays online - forever. She knows, the majority of the class is already digitally connected.

Young people need to be reminded of this from an early age. Their keystrokes matter, whether they are only texting or gaming, before social media comes into their life - learning respect and accountability starts offline. There is a human person on the other-side of the screen.

Sue Scheff is the founder of Parents Universal Resource Experts, Inc and has published three books. Her latest is Shame Nation: The Global Epidemic of Online Hate (Sourcebooks, October 2017).