Why didn't anyone tell me about parenting?

Published by babyonthebrehm on May 6, 2018

Parenting. It’s such a mind screw, isn’t it. First, you enter into the whole idea of it with ideas of chubby, happy babies who are really just sort of accessories to the life you currently keep. A small, darling human that you get to control, dress, get snuggles from, and show off in pictures on Facebook.

And then, you have the human. And you realize that no one told you. Except they did. You just couldn’t hear it in their language. In their “parent speak.”

No one told you that this tiny human that you were excited about because it let you decorate a room, register for things, take you into a different stage of life, and feel love from; no one told you it would somehow become everything. Even if you weren’t about to let it.

No one told you that this baby would require all of your might and your steam. No one told you this person would hold your whole heart in its cries. Or that you would feel this odd connection that you didn’t know existed or was possible. Such a connection that it would drive you insane and also grow your heart in the first instant you met one another. No one said that it was all the time. I mean, they did, right? But there was no possible way you could have actually fathomed the way this child would control every hour of your day. Would take you for the mental ride of your life. Would permeate into every piece of your existence.

No one told you that you would probably cry when it came to sending them to daycare. Or if they did, you knew that you weren’t “that type.” The type that would pour over every letter written on their end of day report, would keep track of every ounce, would worry about every minute of the shuteye the babe decided to give into each day. No one told you that you wouldn’t know if you wanted to go back to a job. Because if they did, you weren’t the type that would give up your identity and degree to stay home and be bored and no longer fascinating.

No one told you that Kindergarten would come in a flash. Or maybe you can recall something about people saying it felt like they blinked and then they were dropping their kids off at school. But you were certain that a)you would never feel so invested in this little person and b)there was no way you would not cherish every single minute. So for you, Kindergarten wouldn’t be a bittersweet moment. It would only be sweet. One out of the house. Bon bons for days. Or less money to daycare.

No one told you that after that. After survival. That you would be so happy to send that tiny baby to Second grade. Because it means that you are here. Here to see him grow. And to watch him walk away with you with some confidence in your stomach that you would be seeing him again at the end of the day.

No one told you. That you might feel like this tiny human that was merely to be an accessory. An addition. A piece of you. Might become more of you than existed before they were here. And you’ll be so glad you didn’t listen. Or didn’t hear. Because if you had, you might have thought it sounded like too much. Like too all-consuming. Like more than you wanted to lose. Because you had no idea how much you’d be gaining.

No one told you that seeing them go to second grade would make you so proud. Because you want to be there to see them do it all. To grow. To unbecome from you and to become into the world. No one told you that you might actually feel like they are what your life was meant for. But not in the way that it is meant for nothing else.

No one could tell you. But they did. Over and over. They told you. They tried. But they couldn’t actually tell you. Because it’s not like a definition to a word. There’s feeling to it. Heart to it. Humanity to it. And life to it. There’s this thing. This part. That no one can tell you. And thank goodness they can’t. Because it may be the very. best. part. The hidden gift beneath all the hard.

No one told me I’d hold his face in my hands and time would sometimes stand still. And that there’d be a moment where I’d wonder what I’d done without him. And then I’d just be thankful that I don’t have to know.

No one told me. Or I just didn’t listen. No one told me how much I’d become this mother. This person who loves my tiny humans. Who struggles with their attitudes… their personalities… their growing. The mom who writes about how much my kids both annoy me and empower me. Exhaust me and teach me. Give me headaches and give me heart.

And just how insanely happy this mom that I have become would be… to be theirs. 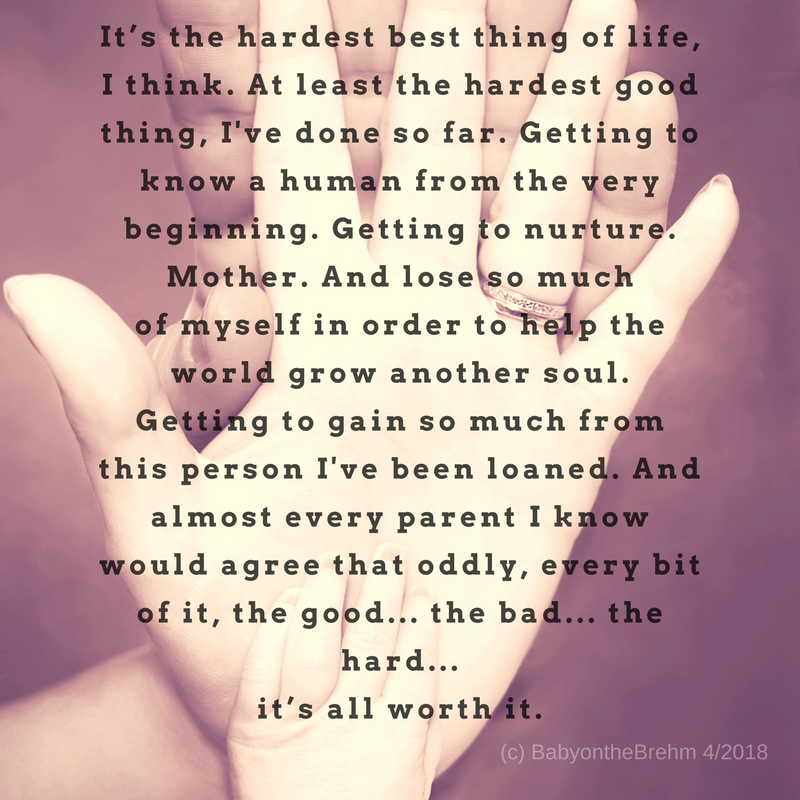 Ashli Brehm is a blogger at Baby on the Brehm. This post was previously published there. She's been writing about motherhood, breast cancer, and life for the last decade and has also been published on Omaha.com, Her View From Home, the Washington Post, and more. Want to keep up with Ashli's crazy train? Find her on Facebook and Instagram!

Woman. Wife. Mama. Goodness gal. I write about motherhood, cancer, goodness, and everything in between.