When my 17-year-old daughter came out to me

“I can’t tell you!” my 17 year-old daughter screamed face-down into her pillow.

What could be wrong now? She was finally doing well after two very horrible years. I was terrified that she was going back to that dark place.

Four years earlier, my husband passed away after suffering a sudden heart attack. He was only 48 years old. I was 45 and our daughters were 10 and 12. It was horrible.

Not long after, my older daughter went through a terrible period of depression and anxiety. There were times when I worried that she would not make it through. Thankfully, after finding the right therapist, the right medication, and her passion for fashion through a part-time job, she came back into the light and was thriving. It took a lot of hard work on both of our parts but it was worth it, and it seemed that the worst was behind us. 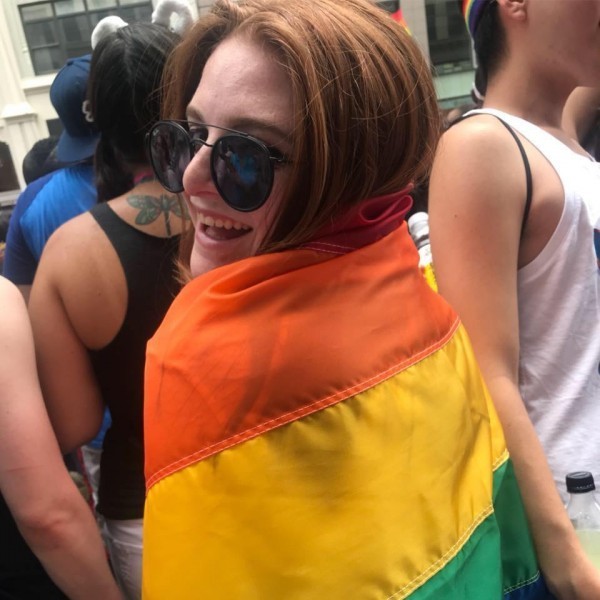 As her senior year of high school was beginning, she suddenly seemed different somehow. She was hiding in her bedroom and had become very quiet and extremely secretive. That old scared feeling was coming back to me. Was she sliding backwards? Was her depression rearing its ugly head again?

I confronted her one afternoon in her bedroom and she promised me that it wasn’t what I feared; she was not depressed or in a dark place. It was something else, but she was afraid to tell me.

The fear of the unknown consumed me. What could it be? Was she sick? Was she pregnant? Was she in some kind of trouble at school? Or worse, legally?

I begged her to tell me, assuring her that whatever it was, we could get through it together.

“I’m gay,” she blurted out, and then put her head back into her pillow.

The shock of what she said almost took the wind out of me - not because her words upset me - but because they were so unexpected. I truly had no idea.

In her 17 years, I had never seen any indication that she was gay. I knew she had been with some boys during her high school years. I also remember her longing for a boyfriend back in middle school. As far as I knew, she had never shown any interest in girls.

Had I missed something or did I just not want to see it?

“What makes you think this?” I asked in almost a whisper.

I immediately found out that this was the wrong thing to say. She proceeded to go on a tirade about how she knew I wouldn’t understand. Once we both took a breath and calmed down, I explained that I wanted to understand, I was just so surprised and didn’t know what to say. Sometimes the wrong words slip out.

We talked for a while after that. She told me that she had been struggling with this for a long time. She also let me know that she had been confiding in her guy friend at school, who was also gay. I was grateful that she had him. I let her know her that I loved her and would always support her. I know that her father would have felt the same way.

My only fear was that this was going to make her life more difficult somehow. We live in white picket fence suburbia where everything and everyone is perfect, or at least appears to be. Gossip is rampant around here. I didn’t want people whispering about her or looking at her differently. She had already been through so much; I wanted her life to get easier, not harder.

As time went on, I learned that being gay today is not like it was when I was growing up. It is common and very accepted. It is not a big deal to kids today at all.

This was so very apparent when I told her younger sister. Her response to the news was, “Yeah, that makes sense.” She seemed to recognize something in her older sister that I did not. There was no shock or concern in her reaction at all.

A year later, my daughter started her next chapter at a fashion college in New York City. She chose to live there, and Manhattan is the perfect place for her. She met a wonderful girl who attends a different school in the same city. They are in a healthy, loving relationship.

She loves school, her grades are fantastic, her confidence is apparent, and she is happier than I have ever seen her.

I am so proud of her and her courage in coming out. She is living life as her true self and there is nothing better than that. The anxiety-ridden 12 year old is long gone. Her bravery inspires me and I hope it will inspire others to be themselves. Most importantly, I hope it inspires parents to accept their children for who they are.

Four Babies, Craigslist and a Boppy: an Adoption Story
When my daughter was the odd girl out
The Ever-Changing Voice of a Mom of a Kid with Mental Illness
advertisement

Four Babies, Craigslist and a Boppy: an Adoption Story
When my daughter was the odd girl out
The Ever-Changing Voice of a Mom of a Kid with Mental Illness