What Your Drink Makes Him Think 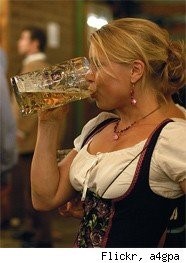 Would you believe that most women are self-conscious about drinking beer in public? Yeah, neither would we. But a recent study revealed that, although women like beer, they sometimes skip it since they feel holding a giant glass of malted hops will make them seem less attractive.

I asked some guys that very question. Check out their answers, so you can make sure your next drink is on us.

"If a girl orders a beer at a bar I know I'm dealing with a certain kind of girl. She's also probably the kind of girl who will order a burger instead of a salad on a date or want to go see a comedy instead of a drama if we go to the movies. In short, a girl who orders a beer makes me think she's the kind of girl I could hang with and that's a good thing. If she orders whiskey, though, I know I'm dealing with a girl who is way cooler than I am." -- Streeter Seidel, CollegeHumor.com editor

"Personally, I find it appealing when a girl is open-minded and takes advantage of her environment by trying that 'local beer,' asking for a wine recommendation or ordering the house cocktail." – Alex Wise, Loveawake co-founder.

"Hearing a girl order a Sex on the Beach always makes me laugh, usually because she'll say it with a tone of implied comedy, thanks to the word sex. It's like when the teacher tells the class to 'turn to page 69,' and everyone giggles. It's almost like she wants people to hear her say 'sex' as a signal that she's looking for some." -- Marty, bartender

"A girly drink is fine, but it doesn't elicit the feelings of adventure that a good glass of scotch gives you. Cosmos and appletinis are 'safe,' while whiskey is not. While not bad cocktails, they're what a girl orders on her 21st birthday, whereas drinks like whiskey have a sense of maturity and sophistication." -- Jonas Halpren, drinkoftheweek.com

"Cuba Libre or a screwdriver in a rocks glass reminds me too much of college. I expect drinks like those to be served in a plastic cup for $2 during happy hour. Or in a $4 pitcher with a giant straw, all night long. They're cheap drinks -- and I've had plenty -- but they say nothing inspiring about the person drinking them." -- Adam Jadhav, St. Louis Post-Dispatch reporter and beer critic 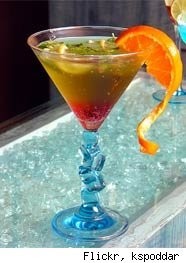 "I serve a lot of rum and colas to women. I think it's the compromise they make between taking a straight shot of whiskey or having some on the rocks. They're usually the 'jeans and T-shirt' type, which I find very attractive." -- Tom, bartender

"Mojitos are trendy. A girl drinking one is also probably wearing skinny jeans and bug-eye sunglasses. And she might have chunks of mint stuck in her teeth." -- John, cameraman

"Appletinis are obnoxious, plain and simple. Even the word makes my skin crawl. That drink indicates a girl who values attention just as much as oxygen, and is a total turn-off. Ladies, you can thank "Sex and the City" for that condemnation." -- Owen, financial analyst

"A girl who throws back Jagerbombs is a total thumbs up. The drink has taken on a pretty douchey reputation, but I see it like this: the Jager means she wants to get drunk, and the Red Bull means she wants to go all night." -- Chris, gym owner "Any girl who orders wine at a bar -- like a neighborhood bar, not a wine bar -- rubs me the wrong way. Wine has a connotation of being classy and proper, and I wonder who she's trying to impress by ordering Sauvignon Blanc at a joint with onion ring & potato skin pizza?" -- Carlos, editor

"Tequila shots are a definite turn-on. Any activity in which the girl has to lick something (in this case, salt) off of someone else has my approval. Plus, tequila is one of those 'I want to get drunk and I don't care who knows it' shots. In the right setting, like a rowdy bar or house party, that's fun." -- Sean, designer

QUESTION: Do you order different drinks depending on your situation? Say, an office happy hour versus a first date versus a night out with the girls?

The Damaging Effect of Alcohol Culture on Our Kids
Is Your Relationship with Alcohol Healthy ... For Your Kids?
Being Drunk & My Final Solution.
advertisement

The Damaging Effect of Alcohol Culture on Our Kids
Is Your Relationship with Alcohol Healthy ... For Your Kids?
Being Drunk & My Final Solution.