What Happens When We Step Back as Parents? 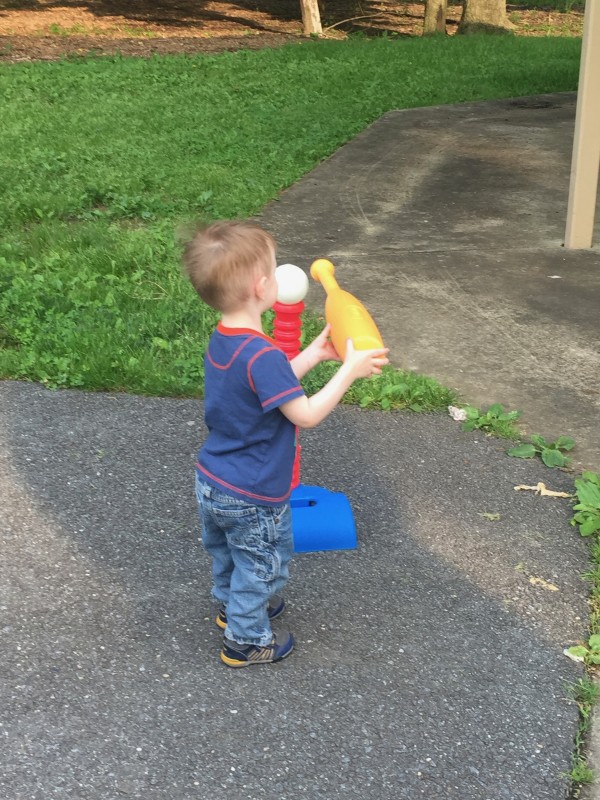 A white plastic ball. A red and blue t-ball stand. A a diminutive kid holding a large, yellow plastic bat.

Watching this scene play out at the playground with my two-year-old son, I tried not to interfere. After all, I thought, he should try it on his own. That is, until he started poking the ball with the narrow end of the bat. Poking it!

I walked over and tried to adjust his hands into the right position. “Look, you swing the bat!” I insisted.

And because my children are nothing of not their own people, he insisted right back.

“No, mama!” he said. Then he went right back to poking it.

I tried again. “No Mama!” he responded even louder. “But but but," my mind cried, “That isn’t right!” My head was going bonkers, but my heart said, “Step back. Just let him play.” So I did.

He continued poking at the ball, then grabbed it off the t-ball stand so he could play catch with me. As we tossed and kicked it back and forth, I knew I had made the right choice. Offering to show him wasn’t a bad thing, but forcing him to use the toy my way - the only way - would have been.

My kids are born experimentalists. They’re doers instead of listeners. They have to test and try everything out for themselves, especially if it’s contrary to what I and their dad say. Perhaps if their way doesn’t work over and over again, they’ll ask for advice. But never before facing multiple defeats.

But I suspect our kids aren’t the only ones with this attitude. Watching babies, you can see them exploring the world, trying this and then that. What happens if I pull these books off the shelf? What’s it taste like if I put this rock in my mouth? What will Mama do if I splash water out of the tub?

As they get older, we expect them to listen more and experiment less. We think that they’ll be willing to substitute their experiences with our hard-earned wisdom. After all, we know what’s right - we’re the adults!

But how often are we wrong about that? How often do we insist our child do something the “right way” when maybe there’s more than one way to do it? What could they have discovered if we didn't force our guidance on them?

Using the wide part of the bat might have hit the ball off the t-ball stand the furthest or the hardest, but maybe that wasn’t what he was going for. Maybe he was just finding out what happens when you poke it with the handle.

This past weekend, I saw him playing with the t-ball set again. I cheered as he held the bat the “right” way. He looked at me, scowled, and turned it right back around. I laughed, appreciating the freedom in letting my kids do their own thing.

Sometimes the bat breaks: Parenting through failures
Anatomy of a Little League Game
Batter Up! Tips on Youth Baseball Gear