What Happened When we Made our Home a Technology Free Zone

Published by Amy Betters-Midtvedt on October 17, 2016 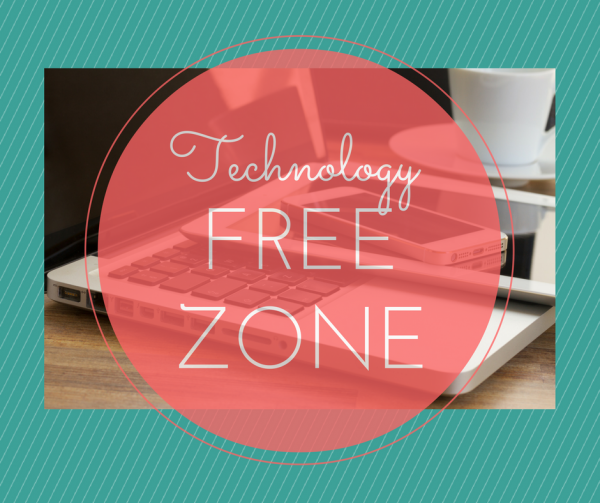 iPods, iPhones, iPads, computers, cell phones, tablets, all those things that my children lovingly refer to as "Electronics" can be both a blessing and a curse. For our family the curse began to outweigh the blessing earlier this year. I'm not sure what happened to cause us to suddenly lose it, all I know is that one day the parents were just ready to snap. Outwardly it would seem that we had good boundaries in place for use of devices (30 minutes in the morning and 30 minutes in the afternoon). Kids spent time outside when they could (hello Wisconsin), were involved in activities that they enjoyed and spent time with friends. Nothing would really have looked like it was too out of order from the outside looking in. Isn't that always the way?

But somehow, we were off the rails. I could feel it, even if I couldn't put my finger on why. I was feeling more and more like I was constantly moving and getting no where. I was more irritated by little things. And my laid back husband was becoming a yeller...which I attributed to stress of raising 5 kids with only 2 parents, I swear we need a 3rd in there somehow. The kids seemed cranky and were fighting more, which can be normal as kids get older right? There was a teenager in the house now after all. Getting the kids to clean up after themselves and help around the house seemed like a battle I should just give up on, it was so much easier to just do it all myself rather than remind them for the 100th time to PICK UP THEIR SOCKS. All seemingly normal family problems, but there was an undercurrent of detachment that I couldn't put my finger on.

Then, one Saturday, I figured it all out. I came home and the kids were sitting around while my husband made dinner. I looked around at them and really noticed what was going on. I heard one child say, "I thought I asked for more noodles" as the dutiful dad grabbed her bowl and refilled her plate. Another demanded water. Yet another was arguing with a sibling about something that happened earlier involving whose turn it was to have the iPad.

Is this how we really wanted our family to be? A family where kids demand things of parents and of each other only thinking of themselves? And then I noticed something else. They were all staring at the TV as they ate, or with just one eye as they fought....when had we become a family that watched TV while we ate? Probably at some point when we just wanted some peace and quiet and used the TV to mute our children. I was embarrassed to realize we used the iPads and iPods for this reason too, to give ourselves a break. But at what price?

It turns out the price was pretty high. We were moving through our days in an electronic fog. The TV on a little too long here, going over our allotted 30 minutes on the iPad there...and none of us saying anything because at least it was mostly quiet. I include myself here. The kids are busy, so I'll just scroll through Facebook for 10 (30) minutes. Or, ironically, I'd take the time to read an online article about being better parent. This was all adding up to not being aware of what was happening around us, putting up with bad behavior and engaging in bad behavior ourselves. So what to do? 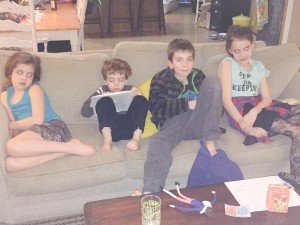 Before: Staring at the TV they actually look like zombies.

I credit my husband with coming up with the seemingly simple answer. A total and complete elimination of the problem and therefore of all electronic devices. I did stop him before he did what he really wanted to do, which was to sell everything on Craig's List. I tucked away the iPad, iPod, and the Wii amid wailing and gnashing of teeth. We were committing to a device free zone for as long as it took, even the TV was no longer an entertainment option.

This may seem like a bold and confident move, but it was really a move made out of desperation by parents who had no idea what to do next. We just took it all away for an undetermined amount of time, not sure what we were looking for or how and when the kids would get them back. We even told the kids that we didn't have a plan and just trusted in our guts at that moment. And then we waited.

What happened next was something I hoped for but wouldn't have believed if I hadn't lived it. The kids complained for a few days (some much more loudly than others and one actually gave us the silent treatment and angry eyebrows for much longer than a few days), then they mostly forgot all about them. At first they'd ask once a day when they'd get them back but even this became half hearted after awhile. It turns out what they missed the most was their AUDIOBOOKS. For real. I'm not just making that part up because I am a teacher. What they found in real life made up for what they had lost in the virtual one.

Games came out of hiding, people were playing together, art supplies were everywhere and my house was a giant mess. The mess part I didn't need but the rest was awesome. We made eye contact. We made cookies. I was exhausted from all the interaction but noticed that I was also weirdly more relaxed and patient. I no longer felt like I was talking to the top of each kid's head. 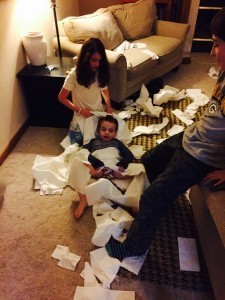 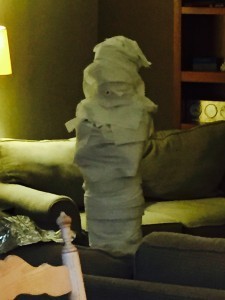 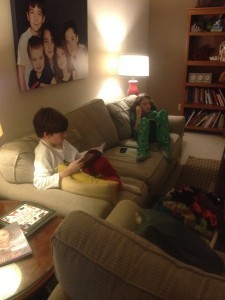 After: Actual pictures of post detox fun. You have to be ready for the weird to happen, but also...books!

We rode out this detox and the benefits were amazing. We had to figure out what our next steps were and how we were going to live in peace with the reality that we must coexist with these devices and as grown ups we had to lead our kids in this department. Technology is not evil, there is so much wonderful learning potential in having technology at our fingertips and it can allow us all to express ourselves creatively. Electronics can be used to connect with people and learn so much. And of course you can listen to books on your handy device while you clean the house which is really something that has saved my life actually.

But because we didn't have an answer, we rode the wave of not using them at all as long as we could, which turned out to be over 2 months. Yup, we couldn't believe it either. We added them back into our lifestyle gradually so they no longer rule our worlds.

This is one of the best experiments we have done in our family so far. If this sound like your home, I challenge you to go cold turkey for awhile. Do a total detox for as long as you can stand it, for as long as it makes sense for you because the change has been lasting and real. Watch out kids, we now realize that we have more power than an iPad, it's called being a parent. And it's amazing.