What Do We Say When Everything Is Not Going To Be Okay? 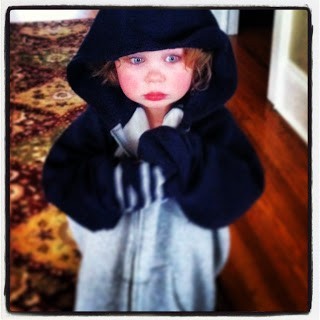 Many years ago an old boyfriend asked me to tell him what my wildest fantasy was. I looked at him. "You really want to know?"

So I leaned in close, lowered my voice, and told him how I wanted--more than anything--for someone to tell me that everything was going to be okay convincingly enough that I believed it.

I knew from the way his face fell that he was disappointed with my answer, but there was nothing else to say. It was the truth.

Everything is going to be okay. It’s such a magical phrase, one of my favorites still. I’ve said it countless times to everyone I love, and once I had kids I found myself saying it to them constantly: everythingisokayitsokayitsokay all strung together to soothe them when they were sad or hurt or scared or over-tired or mad because they couldn't wear dirty underwear as a hat to school. I even say it in my sleep when they whimper next to me, just a reflex that pops out of my still-unconscious mouth, as instinctively a part of my parenting now as checking the toilet seat before I sit down or whipping my arm out across the passenger seat when I brake too fast.

I’ve said it to myself even more, probably a million times over the years, using it as a mantra to get through awkward phases and job losses and bad breakups and bad hair days. But when my mom died, it didn't work. It just wasn't true and I knew it.

“Everything is going to be okay," I would say to myself while laying on the bathroom floor, the only place in my house with a door that locked so I could cry without scaring the kids.

"Everything is going to be okay,” I whispered to my littlest when he was born and it hit me in a wave of terrible realization that he would never meet his grandmother, not once.

“Everything is going to be okay,” I tried to sing to the tune of the Christmas carols that brought me to my knees the first holiday season after she was gone.

Now the words were hollow and flat, not even touching the ache in my heart. Because here’s the thing: there is no "okay" in grief. There is the loss, and then there is the hole in your life shaped like the person you lost. That hole doesn’t fill back up, I have come to realize. Time might heal wounds but it doesn't fill holes and it certainly doesn’t bring anyone back. It's been three years and I still think I sometimes see my mother out of the corner of my eye in a crowded grocery store or driving down the highway. The best I can hope for is that the raw edges scar over and I don't have to walk around torn open and ragged forever.

I think this is why people struggle so much to find the words when someone is grieving. What do you say when you can't say it will be okay? How do we comfort each other when the simple truth is life is so hard and loss is inevitable and it hurts like a son of a bitch pretty much forever?

And am I doing my kids a disservice by always promising that everything will be okay, when very likely it sometimes won't be?

My youngest--the one who will never know his grandmother but has her eyes--came running to me last night, a fresh red welt on his forehead where he'd bumped it playing. I scooped him up, held him tight, and put my face down into his hair. Instinct kicked in and I started to say it, the usual, but then I paused and forced myself to inhale. I could smell his hair, the faintest traces of that baby smell that he had less of every day mixed with shampoo and the yogurt he had smeared on himself after dinner. His face was ruddy from crying and he grabbed fistfuls of my shirt and used it to wipe his eyes.

There is space in me for him. There is space in me for his brother and sisters too, and his father, and our families together and our friends and all of the people who I love and see struggle and want so badly to reach out and say the thing that might help, the only thing we both know is true when we both know that maybe it's not ever gonna be the kind of okay again that it used to be before:

So it's been a long time since anyone wanted to know what my fantasy was, but if anyone asks, I have a new answer. Just be there, I would tell them. Make a little space for me.