Generation-Crossing Music: the Tradition I Share with My Tween 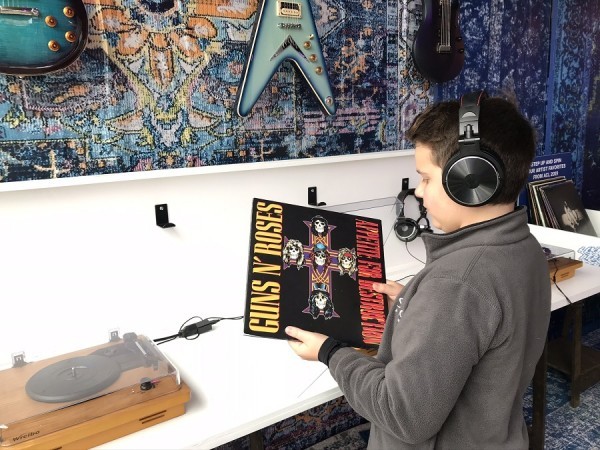 I can only remember my father being angry a handful of times.

The Violent Femmes were blaring loudly from my sister’s stereo in her room, where I had commandeered her boombox. I was bopping along when my father strode purposefully into the room, pushed the STOP button and then EJECT.

“We don’t listen to this kind of music in our house,” he said. And then he threw the cassette in the trash on his way out the door.

I fished it out and learned a valuable lesson that day: don’t listen to songs containing the F word in front of my dad. Despite the music police and Tipper Gore’s best efforts, I still listened to music that was explicit. And honestly, most of the time I sang along blithely, not thinking about what the lyrics meant or even knowing them word for word. In fact, I’m pretty sure I was 18 before I realized that the Phil Rizzuto play-by-play in the middle of Meat Loaf’s “Paradise by the Dashboard Light” was not about baseball at all.

In the shelter of my parents’ screen porch, summer evenings were accompanied by 8-tracks of Buddy Holly, the Beach Boys, and KISS. My parents tolerated Ace Frehley as long as there were no swear words. And I learned to love “Little Deuce Coupe” and “That’ll Be the Day” as much as I did “Snow Blind”. To this day, my mom and dad still have dinner in that screen porch and when I visit, the music turns back time to any given summer of my childhood.

As it turns out, my son loves music as much as I do. As a toddler, he lisped the words to the country songs we played on the radio. To my amusement, that even included Eric Church’s “...all you gotta do is put a drink in my hand.” My husband introduced him to Tupac and George Strait; I crooned Guns N Roses “Patience” to him as a lullaby and taught him how to play the air drum to a Stone Temple Pilots song. He was a sponge, and I’d glance in the rear view mirror to find him singing along to an obscure 80s song I didn’t remember playing for him.

The challenge came when he got into music with the same colorful lyrics that upset my father 30 years ago. I was doing laundry in the basement at my parents’ house the summer before my son turned 6, and he padded down the stairs.

I guess I could have handled it in a number of ways; I opted to drive straight in. I explained to him what that particular word meant, in a way that a kindergartener could digest. He nodded and went back up the stairs.

As he grew, he gravitated away from country and pop and toward hip-hop. The discussion morphed from hearing unfamiliar words to explaining why certain words were not acceptable in our family’s lexicon. In the same way I approached the topic of the sanctity of his own body and the birds and the bees, my feeling was that if I could tackle the subject of words in all of their glory head on, we could build a foundation of trust. Further, I know he understands when I tell him that it’s not a good idea to get in the habit of using explicit language every day because if he slips up at school in front of teachers or other kids, that could mean trouble he doesn’t wish to invite.

We live in one of the great music capitals in America: Austin, Texas. And the Austin City Limits music festival is the mother of them all in our state, so my son and I found our way there the autumn following that first inquiry into the world of explicit words. Starting with the kids’ stage, I started my son’s live music education with kid-appropriate lyrics and tunes.

Fast-forward to last year, when I excitedly looked forward to seeing Metallica and equally wanted to introduce my son to one of my favorite bands. So we cut a deal: he’d see Metallica if I agreed to take him to see Travis Scott. As it turned out, both of us were surprised; the hard-driving drums and raspy vocals appealed to him and the lights and showmanship impressed me.

Music is my coffee and his attitude adjuster. Every weekday morning, one of us picks a song while I prepare breakfast. It might be Young MC. It might be Post Malone. It might be The Cure. It might be TroyBoi. It never fails to start the day out right. It brings us together and reading from the same songbook.

He and I have developed a language based on our mutual appreciation of notes on a scale and words that rhyme and flow. It’s something we share and can find common ground even if we disagree. Sometimes, he even rolls his eyes.

And then I’ll catch him singing along.

Kristin Shaw is a writer based in Austin, Texas. For more of her writing, you can find her at KristinVShaw.com for parenting, music, and entertainment, and she's the co-founder of the Drive Mode show. Her essay and video "I can still pick him up, so I do" has been seen by millions of viewers on the TODAY Parents platform.

My 7-Year-Old Lost His Dad and This Is What Happened at School
Adam Levine: About Your Latest Song
I drove 19 hours to get to my parents. It was worth every minute.
advertisement

My 7-Year-Old Lost His Dad and This Is What Happened at School
Adam Levine: About Your Latest Song
I drove 19 hours to get to my parents. It was worth every minute.