38 Minutes of Terror: How the Ballistic Missile Threat Changed Me

Published by Monica Swanson on January 15, 2018 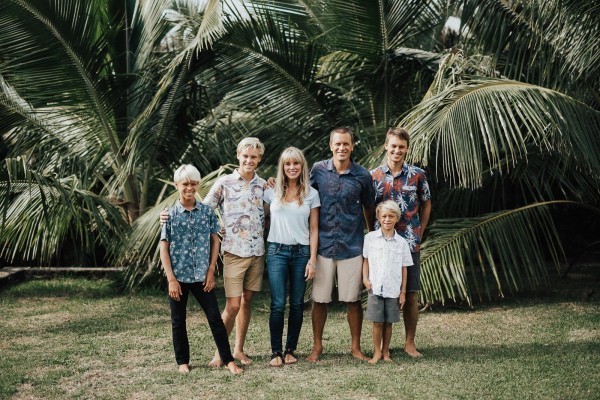 I'm not big on drama, and I don't get rattled easily. At least that's how I've always seen myself. I'm a boy mom, after all, and I kind of need to be tough. Raising my four sons on the North Shore of Oahu, I've watched them surf big waves, and let them dive in underwater caves. Just last week my 13-year-old, a competitive surfer, had a wipeout while surfing, was whipped around under water, (imagine: washing machine) and ended it with a face plant into the reef. He came home trying to hide the lump on his forehead and the cut on his lip because he didn't want me to worry. I saw it, of course, and it reminded me of the dangers he faces every day, but it didn't change my mind about what he does: We think the benefits of this awesome, healthy lifestyle far outweigh the risks. And further: Our boys have trained for this stuff. They're tough. They know our beaches well, and they have prepared for every scenario they are likely to face.

But some scenarios cannot be planned for.

Like when over a million people in Hawaii woke up last weekend to a loud alarm on our phones, and a message that read: Emergency Alert BALLISTIC MISSILE THREAT INBOUND TO HAWAII. SEEK IMMEDIATE SHELTER. THIS IS NOT A DRILL.

Nothing could prepare any of us for that. 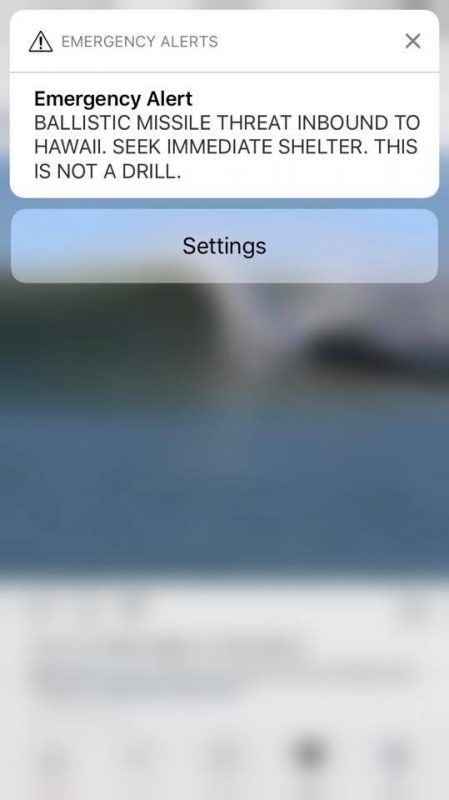 You've probably seen the story in the news already, so you know that it was because of some mistake, (many mistakes, I am guessing) this accidental message was sent, and was not corrected for a full 38 minutes.

So basically, for 38 minutes of my life I actually, really and truly, thought that we were being nuked. This was the end of life as we knew it.

It was heavier than it even sounds. (I promise I'm not into drama, but take a minute and imagine living on an island and getting that message.) At that point I had no reason to doubt the message.

Well, I have replayed the scene in my head a thousand times since it happened. I remembered hearing before that if North Korea ever sent a nuclear warhead, we would have somewhere around 10 minutes to prepare for it. We had chatted about the possibility of a nuclear attack. But it never felt real. And the bottom line is, nothing can prepare you for something like this. Nothing.

My husband is a doctor, and when the alert went out he was already at the hospital, nearly an hour away. Our 13-year-old son was on Maui for a surf contest. Our friend Kendra, a University of Hawaii volleyball player, had spent the night with us. (She's become what we in Hawaii call our "Hanai" daughter — since her family lives in California, she spends a lot of time with us, and is the closest thing our boys have to a big sister.) So I woke her first. Next I woke the three other boys while simultaneously receiving phone calls from my husband, parents, and the 13-year-old on Maui (the one who courageously took the reef to his face a few days ago... who was now in tears, terrified.) My youngest son, 7, was crying and distraught. And as much as I tried to keep my cool, there was no denying this was an Emergency with a capital "E". We were literally all preparing to die.

We all gathered at the center of the house, our laundry room, where there were no windows. This is the same room that just the day before I had complained about — the piles of laundry, and all of that. Now it became my only hope for survival. A refuge.

The events that followed are of course a little funny now, looking back. What each person did, or collected before we all hunkered down in the laundry room was interesting. I was filling pitchers of water, while my oldest was gathering anything mask-like from the garage. (None of which was very mask-like, which we later laughed at.) Kendra, the 6-foot-tall volleyball player with an athlete's metabolism, was collecting every granola bar from the pantry and stock-piling them in the laundry room. One of the boys went on a hunt for Thor, our puppy, making sure he stayed with us. We were all mumbling and praying and acting a little crazy, then we shut the door, sat down, and waited.

I quickly called our military friends hoping they had some information. When I got ahold of the wife, she also had no idea what was happening. All she said, (in a very shaky voice) was to cover every area of skin on our bodies, get away from windows and stay low. Hearing that from the wife of an Army Ranger was not exactly comforting.

There were calls and texts going back and forth between all of us, and at one point we tried to sing "Amazing Grace." We prayed together, and reminded each other that we all have put our faith in God, and at the very worst, we'd all be in heaven together. (Yet what I didn't say out loud was that my bigger fear would be if the nuke hit just far enough away, we would enter heaven after a long slow death, complete with skin melting off and toxic air. Dang imagination.)

It was at least 30 minutes of this madness before my husband called, saying he was pretty confident this was a false alarm. I wanted to believe him. Soon, our military friends called to confirm: A mistake indeed. We paused to thank God for not only keeping us safe, but more: For every single normal ordinary day we get to live. I laughed thinking that those piles of laundry had suddenly become our backup skin protection. I smiled at all of the things that had bothered me before, but now were just a gloriously lovely part of a very full life.

The rest of the day I was pretty much a modern day George Bailey. (Thank you, "It's a Wonderful Life," for my recent inspiration.) I wanted to hug and love every person I passed. I canceled my to-do list and we went to the beach. The water looked a little bluer, and everything I ate tasted especially good. I promised not to complain. For at least 24 hours.

I admit that thinking we had mere moments to live before a nuclear attack affected me deeply. It motivated me to prepare better for future emergencies, yes. But the truth is, I also realized that we will never really be prepared. Whether in the form of a sharp reef, or a nuclear attack, life is dangerous. And though I think I'll always get a sick feeling in my stomach just remembering those horrible 38 minutes, I know they did me good. They reminded me that every day is pure grace. That nothing could make me feel more secure than having peace with God. (And maybe a full laundry room.) I'm aware that we are all vulnerable and fragile, that tomorrow is never promised, and today is precious. And that a little drama is sometimes just part of a rich, and wonderful, life. 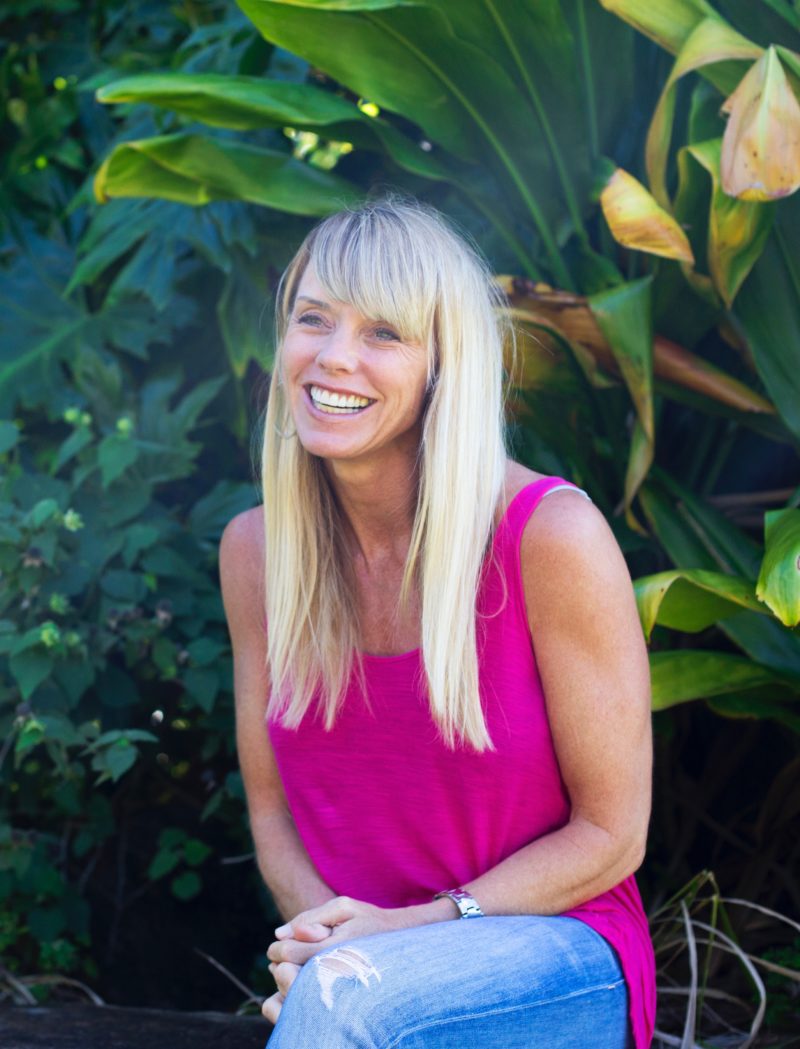 Monica and her husband Dave are raising their four sons on the North Shore of Oahu. They homeschool their boys, and spend much of their time supporting their sons’ competitive surfing, skateboarding, and enjoying all that Hawaii has to offer. You can find Monica sharing stories, recipes, and inspiration for living and loving well at her blog, MonicaSwanson.com

Today I Thought My Family Was Going to Die. Here's My Takeaway
He's The Anchor
What My Husband’s Heart Attack Taught Me At Age 35
advertisement

Today I Thought My Family Was Going to Die. Here's My Takeaway
He's The Anchor
What My Husband’s Heart Attack Taught Me At Age 35