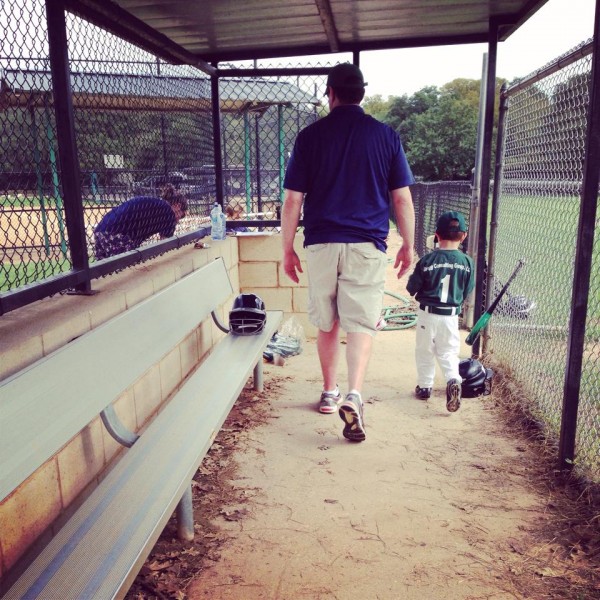 I woke before them this morning and padded silently to the sink for a sip of water. Turning back to look at the impression in the bed where I had been sleeping, my husband and son were snoozing face to face, their foreheads touching.

They look so much alike, I thought. I stopped to look, in wonder. They are so close.

When my son was born, I had to go back to work to support our family. I traveled, reluctantly, to cities around the country and occasionally, across the pond, requiring more days away from my family than I had liked. The postpartum anxiety I had suffered when he was a baby morphed into semi-normal maternal worrying (ranging to slightly obsessive), and before each trip, I had a long list of instructions for my husband.

At first, my husband didn’t say anything. He took my instructions and nodded his head and didn’t flinch. When I returned home after a week-long trip, I noticed our son was getting closer to my husband, and once, I admit I was driven to tears when my son asked for Daddy to put him to bed instead of me.

After I stopped being selfish about it, I came to the realization that I was very fortunate. Our son had two parents who could care for him equally well. Differently, but equally.

A short period of time after that realization, I was leaving for another trip, and I ticked off my worries to my husband, accompanied by a list of requests and procedural guidelines for parenting. Frankly, I was grilling him.

“Babe,” he stopped me, holding my stare. “Don’t you know that I love this boy as much as you do? That I can take care of him?”

I froze. Did I know that? Why was I trying to be both parents when I had a husband who was more than capable? I wasn’t giving him enough credit.

It occurred to me that my working and traveling gave my husband and son an opportunity to bond in ways they can’t while I’m there, because I take the lead. When I’m home, my son defaults to me; when I’m not, they can forge connections and make memories that are special to the two of them alone.

Contrary to general portrayals on sitcoms and even in popular children’s books, dads aren’t the bumbling idiots they’re often made out to be. Dads can feed, clothe, change diapers, and take care of their children to their best ability. The role of the father has come a long way since my mom was born, when they weren’t even allowed in the labor and delivery ward. Dads are great parents too, and maybe they can be even better if we let them do their job without micro-managing.

A few years ago, my husband and I had an argument. Frustrated and boiling over with stress after a tough week of business travel and illness that ran through our son, me, and our sitter, we were at an impasse.

Somewhere along this venting session, one of us said something to make the other laugh. And before I went upstairs for bed, I took his face in my hands and I said, “I want you to know that I think you are an outstanding husband and stellar father. No matter what, and no matter how mad I am at you, that is always true. You are the husband and father of our child I always wanted and I love you very much."

I watched his face transform. I saw tears blinked back. And I saw an expression in his face I did not expect to see: surprise.

And at that moment I realized I have not said those words nearly enough.

Since that moment, I take the time to tell him that he does a good job, and now that my son plays baseball and my husband coaches his team, I have watched their bond get even stronger with a shared love of the game. And every night, my husband reads to our son before bedtime, and they put their heads together and hold on tight in a bear hug that always pulls at my heart.

Dads CAN. And they do.

Kristin Shaw is a writer based in Austin, Texas. Her work can be found at the TODAY Parenting site, The Washington Post, SheBuysCars, and at her site, KristinVShaw.com. Her first children's book, Ricky and the Broken Box, was recently released in conjunction with the stars of the TV Show American Restoration. On Facebook, Instagram, and Twitter, her handle is @KristinVShaw.

To All The Dads Who Are Supermen — I See You
Because Dads Feel It Too
He's their dad, not their babysitter
advertisement

To All The Dads Who Are Supermen — I See You
Because Dads Feel It Too
He's their dad, not their babysitter