Depression and the Decorative Apple 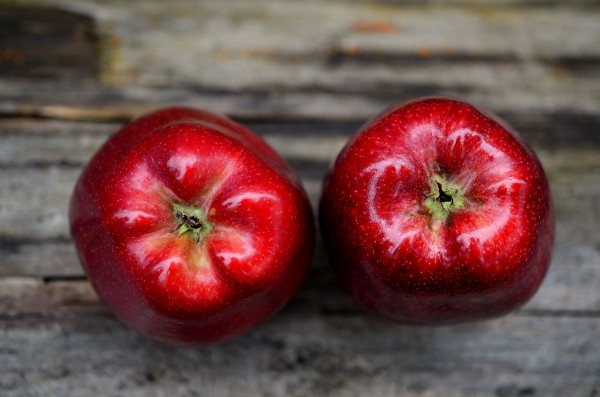 When I was 16--and on LSD--the decorative apple split open, and so did I.

Let's start from the beginning.

So I was 16 and stupid enough to try (almost) anything once, but as I sunk heavy into the kitchen chair to wait for the fog of the LSD I had taken hours earlier with my friends to lift, I knew this was likely going to be both the first and the last time I messed with acid. It had been fun for a little while--when the drug had kicked in I had been flooded with what I thought were deep revelations of my psyche:

We are stardust
We are golden
We are billion year old carbon...

Heavy stuff, am I right? But soon enough I figured out those were actually CSNY lyrics and then I just felt raw and a little lonely inside of my own head, which when you're prone to serious fits of existential angst—and really, who isn’t at 16?--is the last place you want to be. I would argue that at least for the sensitive ones, those of us desperately trying to find the answers to the big questions by reading the bible, our palms, our tea leaves, and everything in between; hallucinogenics may not be the ideal form of recreation.

And so I sat in the warm kitchen, waiting impatiently for the drug to be done and watching my mother make dinner. She was a sight: as put together as I was disheveled, fresh from work in a power suit with full and flawless make-up, her shoulder pads erring just on the inside edge of ridiculous. By then things were tense between us even when I wasn't high, and in the kitchen we were quiet enough together that the sound of her heels on the hardwoods felt like a heartbeat through my buzz-filter.

“Are you okay?” she asked me, breaking my reverie. “You’re awful quiet.” I was sure she could see that I wasn't if she just stopped and looked, took in my dilated pupils and the new dusting of freckles on my cheeks that I should not have gotten had I been in school all day where I belonged.

"I'm fine,” I lied, “tired is all.” She took me at this and didn't press the issue. I was surprised by how much this stung, but then the air filled with the smell of garlic and good olive oil, and I forgot, ravenous. This isn't surprising- in every memory of high school I have I am ravenous, empty, desperate to fill the emptiness inside of me with something--even LSD, I guess. I was just beginning then to fall into the eating disorder that would consume me the next year, but no one knew that yet, not even me.

All I knew was the hunger.

And on the table in front me was a bowl of the most perfect looking granny smith apples. YES, I thought. THAT. I picked one up, the best of them all, and noticed that it was shiny enough for me to see my distorted reflection in it. I looked terrifying if I turned the apple one way, terrified if I turned it the other. I think I was probably both.

My mother tsked at me, waving her hand. "Oh don't eat that one," she said, looking up at me for the first time. "There are apples in the fridge if you are hungry."

I could have just done it. I could have gotten up and gotten an apple from the fridge like she said and left it at that- except I was 16 and angsty and didn’t really understand what it meant that we were both made of the same stardust.

Plus, I wanted a fight. “What’s wrong with this one?” I asked her. Other than my screwed up face in it.

“It’s for… decoration?” I said this the way you would talk to someone who was clearly insane, and maybe a little dangerous on top of that. I talked to her a lot of the time like that then. I was a bit of an asshole.

Under the lie of the shoulder pads I saw her sag, and then inhale, recover. “Exactly,” she spat at me. “Put that one back. I’ll get you one from the fridge.” She clicked towards the refrigerator and pulled the door open, hard.

“Mom. It's fine.” I waved her off, feeling guilty. “I'm not hungry." This--of course--wasn't true, I was so hungry. Hungry for the chemical-tightness in my jaw to release and my acid trip to end, but there was more. Everything was shifting and new, including this hard and unmanageable thing between her and I. Like the apple in my hand, she was so perfect, so clean and orderly and put together, and I just wanted to sit next to her for a while and take it all in. Reset.

I missed her, really.

I should have told her.

But I didn’t. She clicked back to the garlic on the stove and I played with the decorative apple, twirling it around in a circle on the table like a top until it spun so fast that it got away from me, hit the side of the shallow blue bowl, and cracked clean in half. The two pieces fell open onto the table and I gasped. The inside of that perfect apple was totally rotten, all brown and soft and mealy. I spent a long time looking at it lying on the table in front of me, smelling its earthy fermentation smell, convinced there was a message there for me.

It had looked so perfect.

When I finally looked back up at my mother, I did so in slow motion, sure that she was as floored by this fruit-revelation as I was. “Jesus, Elizabeth,” she said, her face all screwed up like she had seen something, well, rotten. "Put that shit in the garbage.” I had forgotten that she was not on hallucinogenic drugs.

But the moment commanded something more than that, something deep and real. I made no move to get up. “Mom?”

I wanted her to laugh, maybe, or touch my arm. I wanted her to know exactly what I was asking her, which was "is it going to get better? Am I going to be okay? Are you? Are we?" I wanted her to stop what she was doing, put down the knife, and look at me--see me--and know that in that moment I needed her to just be my mother.

But 16 is just old enough that even if she had--which she didn't--it wouldn't have been enough. 16 is the beginning of having to figure it out yourself.

"Happy?" she asked, in that same tone I had used when I mocked her decorative apples, and I wondered which came first: her parroting me or me parroting her.

She didn't speak for a while, long enough to me to assume that the silence was her answer. I had started to gather the pieces of the apple together so I could throw them out when I swear I heard her say “of course not,” so quiet that I'll never know for sure it wasn't just in my own head. “Don't be ridiculous.”

That time in the kitchen with the apple was--thankfully--the only time I ever took LSD. It was also the first time that I understood in a very real way how our outsides don't always match our insides. That our outsides can lie and say "no really, everything is great here," when the truth is we are dying a little inside. The way my mother--mid-40s and brewing up the kind of depression that would eventually take her life--was, but the way I was too at 16, brewing up an eating disorder that almost took mine.

The lesson was in the apple, but I didn't get it then. It took me two decades and a funeral where people kept coming up to me and wringing their hands, saying "I just had no idea. I'm so sorry," as if the fault lied somewhere in them, as if we should have all looked really hard so we could have seen the struggle shining for help in her eyeballs the way Gotham City shines out for Batman.

Here's the lesson: Struggling can hide. You just can't know. Maybe it's the woman next to you in Target, her hair perfect and her heels clicking behind her cart. Maybe it's the woman at school drop off who looks so damn put together that you feel ugly just passing by her. Maybe it's your neighbor with the best manicured lawn, or the guy in the cubicle next to you who chews so loud that sometimes you forget we are stardust and feel stabby instead.

And if we can't know, I don't know what else we can do other than this:

Maybe we could just try to normalize the suffering.

When I figured this out it felt like the kind of earth-shaking revelation that had to be shared. I tried for a while in different ways to let people know I knew, that I got it, that we all are carrying our brokenness stories around inside of us. For a while that meant that I cornered people in bars or supermarkets and made them answer me--really answer me--when I asked them how they were doing. This didn't really work and also had the unintended consequence of making me look like a deranged stalker. I try not do it as much these days.

But what else can we do, I thought, desperate. And then a familiar so-quiet voice said: what if you told the story of your own suffering?

YES. I thought. THAT. What if I owned it and wore it and refused to be ashamed or quiet? What if I tried to make space in my heart for other people to do the same? And so I did. And people responded. They sent me messages, they stopped me in the grocery store. They said "me too!" and "I hear you!" and "I'm here!" and then the best thing of all happened that I never even dreamt of: I stopped being so hungry. Many hands make suffering lighter and the happy mixes in with the broken bits and we are a mosaic of real-ness, the true beauty, where the inside matches the outside.

Sometimes I wonder still what would have happened if my mother and I had opened up to each other there in the kitchen. Could we have saved each other? It's a slippery path, that regret, and I can feel it pull me, tug my leg, hungry. I could have looked at her, said: "We can do this. We can carry each other."

We can do this.

We can carry each other.

We're all made of the same stardust, after all.