Four years ago, when our son was eight years old, he announced with delight one day, “Mom! I’m not small anymore!” It was as if he’d just realized it, as if it had literally happened overnight. Sometimes it does seem to parents as though their children have grown up overnight. We wonder where the time has gone. Sad as we might feel about the loss of our babies, bittersweet as their growing up may be, I felt nothing but joy upon hearing my son report that he was no longer small. For you see, he was once very small indeed, when he burst into this world nearly seventeen weeks before his due date. At his birth, our little micro-preemie measured just twelve inches long and weighed a mere 1.7 pounds. One of the NICU nurses suggested we tell our friends to think about a package of ground beef when they had trouble imagining the size of our newborn baby.

Another NICU nurse insisted on taking photos of us with our shockingly premature son, photos we thought we didn’t want. If the outcome was bad, it would make us so sad to look at these photos later. If the outcome was good, would we really want to look back and remember those stressful, uncertain first few hours and days after William was born? Also, despite several nurses telling us how “stinkin’ cute” our baby was, he didn’t seem that way to us at the time. His skin was red and appeared to be stretched too tightly over his tiny body. His eyes were still fused shut, making it look as though he had no eyes at all. He was scarcely bigger than my husband’s outstretched hand, and he looked for all the world like a tiny burn victim. Of course now, we’re so happy we have those photos of our miracle baby on the day he was born. Those NICU nurses knew what they were doing, in so many ways! 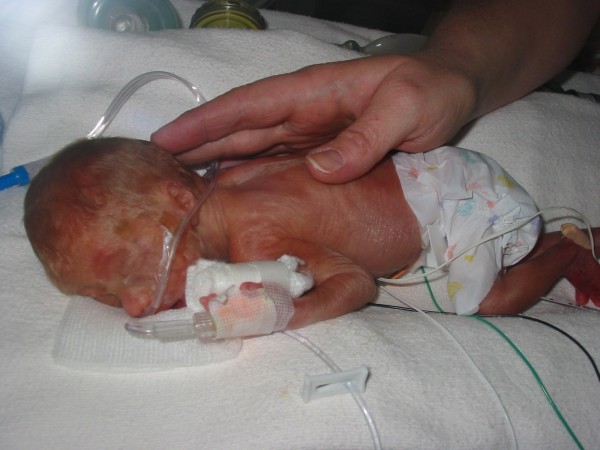 I’d been having complications for several weeks before William was born...unexplained bleeding and cramping... and the doctors weren’t sure why. I alternated between believing the pregnancy was destined to end in a miscarriage and telling myself that everything would turn out fine. Then came full-blown labor when I was just 23 1/2 weeks pregnant. By the time I reached the hospital, I was 2 centimeters dilated with contractions coming every 2-3 minutes. The ER doctors were able to temporarily stop the contractions by giving me magnesium. They also gave me steroids to help develop the baby’s lungs. In 48 hours, they would have to wean me off the magnesium and see what happened. Best case scenario: the contractions would not return, and I would remain on bed rest on the high-risk floor of the hospital until the baby was born, hopefully months from then. Worst case scenario: the contractions would return and the baby would be born right then, nearly 17 weeks early.

In a conference call with my husband, who was in California on business, a nervous resident explained the risks and possible outcomes. Nothing the doctor said was particularly reassuring or hopeful. Babies born at less than 24 weeks gestation were not considered “viable,” and to complicate things further, our baby was breach. If he even survived the delivery, something the doctor referred to as “unlikely,” chances were he would have major complications: a possible brain bleed, lung problems, vision impairment, or hearing loss. There were any number of horrible possibilities.

In those first photos taken after our son was brought to the NICU, my husband and I are smiling. People have asked me how we look so happy at such a scary time, and how we stayed so positive and upbeat during the entire 4 months our baby was in the NICU, when the outcome was uncertain from day to day. To understand this, you have to understand that for me, this was the best possible outcome. As soon as the doctors weaned me off the magnesium, and my contractions returned, I gave up on the notion of a full-term pregnancy and a “normal” delivery. Because we had been told how bad the odds were of our baby surviving, and because we had chosen, in one of the most difficult decisions of our lives, not to take any extraordinary measures, I truly believed that our baby would not make it through the delivery.

So when our baby did survive, and when he shocked all the nurses and doctors by somehow managing to breathe on his own for 48 hours before needing to be intubated, it was all better than I could have imagined just a few days earlier. The worst hadn’t happened, so how could I be sad or depressed? The outcome was still far from certain, and we would have to take it one day at a time, but I found myself feeling pretty positive most of the time, because I was lucky enough to have a baby who was either a miracle, a fighter, or a little bit of both. 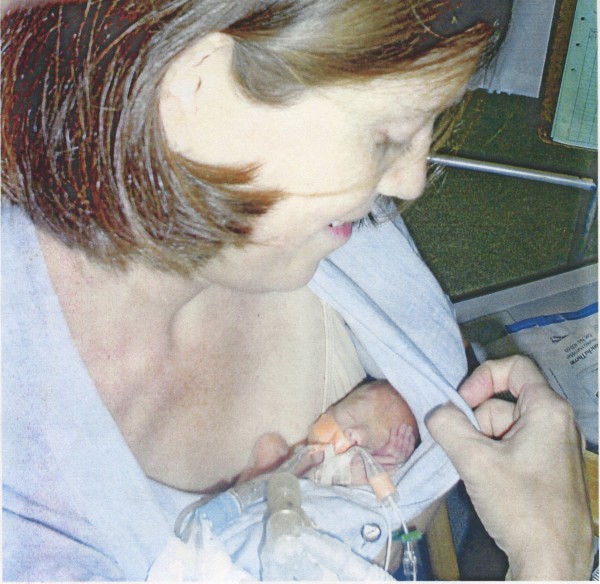 I remember when our son finally made it onto the growth chart during a doctor visit at 8 months of age. We were so excited to learn that he was in the 2nd percentile for weight and the 5th for height. A year later, the pediatrician told us, “If you don’t want to, you don’t need to tell anyone he was born so premature; they’ll never know. He has essentially caught up with his peers.” But of course, I did tell people, all the time. I couldn’t help it, because I was so grateful to the nurses, doctors, and the technology that helped save him, so amazed by his determination and will to live, and so thankful for our good fortune and the miracle that occurred when he was born.

Our son is twelve now. Sometimes he’ll worry about having to get a shot at the doctor’s, or he’ll freak out at the sight of a little blood from a cut he’s gotten, and I’ll think to myself, “Silly boy! How can this be a concern to you when you once had an IV in your head because all the veins in your tiny hands and feet had been used up?” Occasionally he'll get frustrated because something is difficult for him (lately it tends to be math homework; in the past it was tasks like learning to tie shoes or to ride a bike), and I’ll think, “Of course this isn’t going to defeat you. You overcame a lot more than this just to be here with us today.” But generally speaking, our son doesn’t let things defeat him. His attitude tends to be one of quiet perseverance and hard work. Many things have not come easily to him over the years, but he tackles most tasks with a simple, “I’ll try.”

One of the NICU nurses told us she plans to remember our son’s name because she’s sure she’ll hear it in the news someday. Her feeling was that he must be destined for greatness, given the amazing start to his life. Maybe that’s true. Or maybe he’s already achieved his purpose simply by reminding all those around him not to give up, that so much can be accomplished when we just take it one day at a time and try our hardest.

Lori I
> See my posts
> Visit my blog