This Year, We Choose Happiness: My Son Will Never Play Soccer And That's OK!

Published by manvsmommy on January 4, 2017

I’m sitting, happily gazing at Man during a swimming lesson.Down he goes, and then out pops his little face adorned with a satisfying grin.I too am beaming with pride at his success—you see, until recently, his Sensory Processing Disorder made it impossible for him to fully submerge his face under water.Watching him do this is HUGE and fills me with delight, but, I will admit, also relief.At six, Man was the only first grader still wearing floaties at the pool, something he was acutely aware of, but unable to change.Until now.

I glance up to notice one of his classmates sitting on a bench next to the pool.He is quietly reading a chapter book, a large chapter book, a chapter book that clearly exceeds the literacy skills of most first graders.He is there patiently enjoying his story while his little brother takes a swimming lesson- he has already mastered swimming himself.A pang of jealousy and competitiveness burns inside of me.

“Do you know that I saw XX reading a chapter book!?!” I mention to a mom friend a few moments later.She is not surprised and also casually mentions that he excels at soccer as well.He is a classic overachiever, and is bound to succeed in life- a future filled with a fabulous career and riches galore is most definitely in the cards.My friend marvels at this and comments on how she too would love for her son to be successful.I respond by saying that I just want Man to grow up and be happy.

Maybe it’s because I watch him struggle at tasks that most children do seamlessly without thinking, or maybe it’s because I have already sat in four meetings with his educational team and it’s only the beginning of January, but for whatever reason, to me, success for my guy means getting off the bus with a smile on his face.I know I am not unique in this thinking, and all parents want their kids to be happy, but each of us has a different definition of “success.”

I began to ponder, what are we really asking of our children?

It has taken many years and a boatload of acceptance for me to come to the realization that, at least for the time being, Man is not going to be the star of the class, or the captain of the soccer team, the most popular kid, or the most talented.It’s not that he doesn’t have the potential to be many of these things, for he is smart, and kind, and funny, brilliant and talented in ways many other children are not.But his ADHD and SPD cause him to struggle in many areas.Watching him struggle has taught me that what is most important, what is vital to his future success, is his happiness and self esteem.

I was recently brought to tears during one of our many educational team meetings.I tried over and over again to find something, just one single thing, which showed that Man excelled as a first grader and as a little boy.“Maybe he calls out so much because he has a lot of ideas about the topic you are discussing!”“What if his behavior is deteriorating because he’s bored and already understands what you are teaching?”“Don’t you think he would benefit from some more challenging math work?”

“No”, was the repeated answer.“No, he is not bored or in need of any more academic challenges.He is the way he is and we are all doing the best we can for him.”

“You don’t understand, I wept, I need for him to excel at something, anything!!Just tell me one thing he does really well!!I watch him struggle to participate in tasks like piano and dance, things he loves and he himself chooses to do.I need to hear that there is something, ANYTHING, that he participates in during his day that does not pose a challenge!!”

I was met with sympathetic nods, but more importantly, I was told the following, “Don’t worry, he really is doing well!He is so happy and enthusiastic, he loves to learn and participate, he is kind and has lots of friends and he thinks very highly of himself.”

And in that moment what is most important became clear:

I no longer care that he hates soccer or that he would rather build a rocket then score a touchdown.

It doesn’t bother me anymore that he continuously calls out in class or doesn’t fit into the profile of a typical student.

I stopped defining the achievements or failures of his days by his behavior chart.

If he is still wearing floaties at the pool this summer, I would be cool with that and I would make sure he felt like a badass wearing them.

It’s not worth getting frustrated about the fact that he has been sounding out short words since he was three, but reads on grade level because he can’t focus long enough to get better at it.

The fact that he has no interest in taking tennis lessons or doing Tae Kwan Doh like his friends is of no consequence.

When he needs to leave his dance class because he is too over stimulated, so what?

That day he sat and colored for the entirety of his piano lesson because he had no more focus left in him, big deal…

I won’t tell you that I don’t worry constantly about his inability to perform the tasks of typical children his age; I worry all of the time.But I can tell you that I am far more focused on teaching him lessons that will make these facts irrelevant in his future.I’m trying to teach him to be himself and to be happy with whom he is.

What are the “tiger moms” of the world doing for their kids if not teaching them to define success by each external achievement?I am teaching Man to define success by each attempt.Failure is great; it means you had the balls to try.If you tried, you can feel proud and accomplished.I want him to understand that choosing happiness above all is what’s important in life.Today it seems that we push kids to do more and be more, what happened to just being happy kids?When did it become so important for a six-year-old to be a superstar?

Success is near impossible without happiness and good self esteem.It is unattainable without having to learn to cope with failure, and to figure out how to pick ones self up, and try again.Not everyone is going to win that trophy, or come in first place, and that has to be ok.We are doing our children a disservice if we teach them that they have to be good at everything, rather then just trying their hardest. They must understand that doing their best is good enough, even when they come in last place.Failure is part of life; it’s the grace with which you handle it and the lessons you take from it, that define you.

He might never play soccer or tennis, be a professional hip-hop dancer, or the valedictorian, but one day, things will fall into place for Man. His future is bright and, following many failures, he will become whatever he wants to in life, I am absolutely positive about this.But every day he is successful one, because when he lays his head on his pillow at night he does it with a smile and a sense of accomplishment. 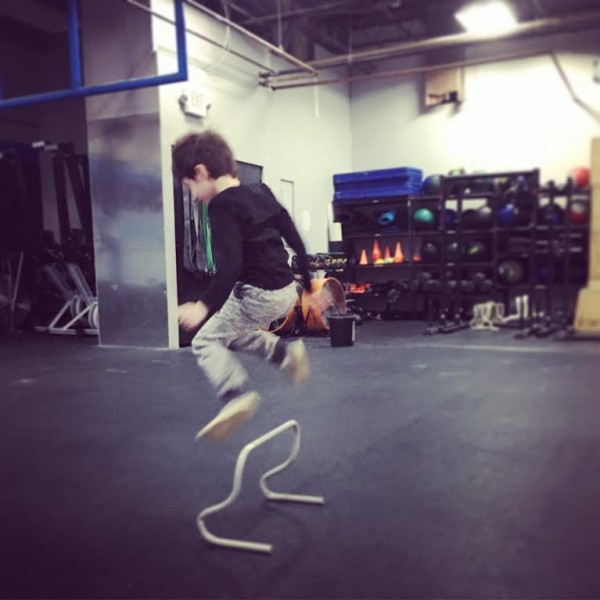 My Kid Will Never Play Soccer And That's OK!
Back To School With ADHD
8 simple rules my dad taught me about life before he died
advertisement

My Kid Will Never Play Soccer And That's OK!
Back To School With ADHD
8 simple rules my dad taught me about life before he died