This Year, Trick or Treaters Must Pass Through my Technological Fortress 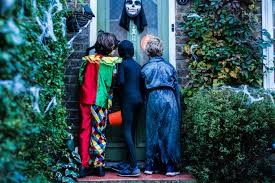 It’s official: Less than one week before Halloween, I have achieved “grumpy old man” status. And the worst part? It’s self-anointed.

I decided I was no longer any fun when an Amazon box arrived containing one of those Ring video doorbells that allows homeowners to see who is outside simply by looking at their phones. For years my wife has longed for one, fearful that an intruder could easily enter our home once we opened the front door, which lacks secondary protection in the form of a screen, or border wall fortified by a snake and alligator-infested moat. If Amazon sold the latter, my wife would be second in line to purchase one. Right behind President Trump.

October 31 used to be one of my favorite calendar days. I neglect to call Halloween a “holiday” because its status as a day of celebration is disappearing faster than the M&M/Candy Corn mix that makes its debut in my house around October 1 and is placed far too close to my home office. In Evanston, Illinois, Lincoln Elementary school made headlines when it announced it was canceling its Halloween party, citing religious and cultural differences among the student body.

I was that parent who always opted to stay home on Halloween, while my wife squired our two daughters around the neighborhood, patiently waiting at the curb while they bounded from door to door in princess attire. Meanwhile, I rose from the couch each time the doorbell rang, anxious to see the assortment of ghoulishly attired kids on the other side while stuffing multiple treats into their bags. NOTE: Handing out more than a single item quickly gets you a reputation as a “must visit” house among the neighborhood kids. True, I never achieved the status of my neighbor Tom; his lavishly decorated front yard included not only treats for kids, but beer for dads. And I didn’t even have to dress up or say, “Trick or Treat” to receive one.

Now, with the acquisition of Ring, I find myself excited about the ability to “screen” trick or treaters before greeting them. I can look at my phone and decide which costumes merit my attention. If my iPhone shows a kid whose costume screams, “My mom labored late into the night to create this,” then sure, I’ll open the door. Conversely, if my screen shows a sullen 15-year-old who decided to trick or treat dressed as a “sullen 15-year-old,” I might stay on the couch, ignoring the repeated barks from my dog. I should admit that my dog likes Halloween about as much as she likes violent thunderstorms.

Even my wife is shocked by my sudden lack of enthusiasm for Halloween.

“You’re really going to only open the door for certain kids?” she asked.

“That’s not why I bought Ring,” she said. “I bought it to keep somebody from walking right in and attacking us.”

“How do you know one of those kids won’t be armed with a plastic hatchet? Or worse, a sickle?” I said. “I could have a heart attack caused by fear alone.”

“You’re going to regret your decision when Halloween is over and we’re left with all this candy that you could have easily handed out to the kids,” she said. “Then you’ll eat it and soon you’ll be too lazy to get off the couch whenever you hear the bell.”

“Great. Then we can return Ring,” I said.

“You’re not going to have this attitude for Thanksgiving, I hope,” she said. “Or worse, Christmas.”

I promised her I wouldn’t.

Providing Santa continues to enter our house through the chimney, as opposed to ringing the doorbell.