I didn’t see this photo until it appeared on my Timehop 3 years later, on Simon’s birthday yesterday.

Actually, someone probably showed it to me in the recovery room, but that was all a huge blur.

I remember that when they pulled him out of my C-section stomach, he was making a bit of a wheezy noise. He cried a little, but mostly he just mean mugged everyone and made this raspy little noise. My very first thought was that he looked so pissed off.

My second thought was that he was beautiful, but in an angry, I’m scared of my toddler right now kind of way.

Disclaimer: We all know that everyone else’s babies come out looking like every other baby in the world. But not your baby, your baby is beautiful even when he has some gooey nonsense all over him and looks like an angry hobbit.

My third thought was to worry if he was okay because of his little wheezy noise. Something just didn’t sound right. This is not what I had expected. I listened to that noise over and over while they weighed him and I asked them a million times if he was okay.

Then they brought him over so I could hold him for the first time. They placed my fresh baby sort of awkwardly in my arms, and that is exactly when this picture was taken. I remember grabbing him and making shushing noises to try and calm him down and make him stop wheezing.

I look at this picture and I see my closed eyes and hand on his tiny, little head and remember that feeling in my heart. And I swear he made a tiny little baby sigh of relief. And then I know that our family was complete. 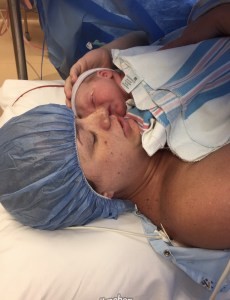 Oddly enough, after that, I was scared I was going to drop him. I don’t know why that was my natural train of thought but it has continued in that direction.

I love this picture and I’m kind of glad I just found it. It gave me all the feels and the full heart I needed at this time of uncertainty.

No matter what, a mom will always protect her babies.

So don’t mess with our kids or we will straight up remember your name for the rest of our life and dislike you for fifty years even though we never met you.

Tiny Bear
If the Boxes Could Talk
7 Unrealities of Parenthood