This Isn't How It's Supposed To Be

Published by Annalee Thomasson on December 22, 2017

I’ve been going back and forth on whether or not to share this, mostly because I didn’t want it to seem as if I was complaining. I think that writing and sharing this is not only good for my own processing and working through it, but it also gives me a unique ability to connect with those of you who may have gone through something similar. 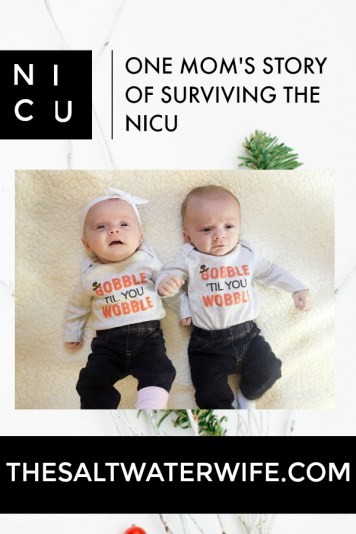 I hate to even say gone through because I feel like that makes it sound like we were facing life and death. And we weren’t. The last thing I want to do is make it sound worse than it was, because the fact is there are many babies and families who are dealing with way worse things every single day.

But you can’t always compare your mess to someone else’s. At the end of the day, this was our mess. And it was tough. And it was scary. And I thank God it’s over. But I wanted to tell you a little about how our NICU stay changed me… and how our start to babies wasn’t quite what we had imagined. 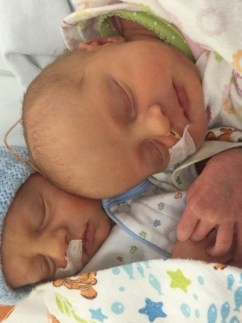 We knew ahead of time that some time in the NICU was likely. If we had made it to our goal of 36+ weeks, we may have gotten by without it. But when I went into labor at 33 weeks, a longer time in the NICU became a scary and sudden reality.

We were told before delivery that we would be looking at a one week minimum, longer if there were any big struggles. That was the first glimpse of understanding we had going into it. It was the first minute of our three day labor + delivery that I felt like I had a little bit of control. It was also the first minute that I realized how afraid I actually was. I now understood and feared the moment that I had these babies, knowing they would be taken away. I knew they were going to be well cared for and looked after, but I also knew that babies are supposed to be with mom, and I wanted my babies to be with me.

When they arrived, I was met with my exact fears. I tried really hard to be understanding, to trust the doctors, and to listen to my nurses who reassured me every chance they got. But it didn’t change this awful feeling deep in my gut that this was all wrong. This wasn’t how it was supposed to be.

I did get about a minute with both babies on my chest before the doctors took them down to the NICU. The doctor that took them told me they have all ten fingers, all ten toes, and they are breathing totally on their own. Don’t you worry about a thing, Then she took them one by one and put them in their bassinet, and they left. Marshall went with them, and that helped, but it still wasn’t right.

I was moved to recovery, did rounds with my new nurses, and then, I finally got to go to them. I was dealing with extreme swelling from my ribs down, from all the fluid and medicines I was given through labor and delivery. You can read more about that here. So, Marshall pushed me in the wheelchair, which I ended up using for three days, until I was able to start walking again.

Our babies were both born breathing room air. This, we learned, is a huge head start when it comes to NICU babies!! They each had an IV in their little hand, a feeding tube in their nose taped to their face, 3 monitors attached to their chest/belly, a blood pressure cuff on their leg, and an oxygen monitor on their foot. While all normal, there was a lot of beeping, a lot of machines, a lot of people, and no sense of calm. The bassinets were gone and they were in big plastic boxes that had circles that opened on the side so we could reach in and touch them. I could hold them too, with help from the nurses. It looked a lot worse than it was. But as a new mom, all I could see was that my babies were not in my arms. Though minimal, there were wires. Feeding tubes. It was overwhelming. It wasn’t normal. And it didn’t feel good.

I was thankful every minute of every day for the doctors and nurses that felt hand picked from God himself… not just for the babies, but for me. NICU staff don’t just tend to babies. They also have to take care of new moms who could be just minutes to hours after delivery, and through some of the scariest days of their lives. They didn’t just take care of my twins. They actually 100% took care of me, too. And for that I’m incredibly thankful.

Our stay in the NICU was largely based off of their inability to eat, with a short time of waiting for them to be able to regulate their own body temperature. Here and there we’d have alarms where their heart rates or oxygen would dip too low, but those were quickly resolved. Their early feedings were always through their tube, but slowly they started learning to eat from a bottle (taking all food from a bottle was our ticket home). 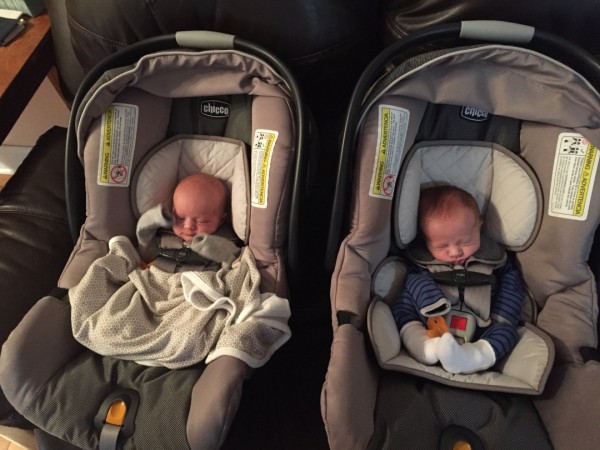 I was a patient in the hospital for their first 4 days. We spent each day in their room, aside from every few hours going back to my own room so that my nurses could check on me. And, I slept in my own room each night. So, we only left them to go to bed. That is, until I was discharged.

There is absolutely nothing good about being discharged and having babies in the NICU. Not one thing. I had talked myself through it for days, trying to prepare for that moment. But there was absolutely nothing that could have prepared me for walking out of that hospital without my babies. I considered staying, but I knew that we had a few weeks to go, and that we would all be better off if I was well rested and able to be fully present with them each day. I shook and cried from their room, to the car, and the whole way home. I felt nauseous, spacy, and completely afraid.

My husband was driving, and I think I might have nearly broken his hands squeezing them so hard on our way out, but I wasn’t able to catch a breath until I ran into a nurse friend at the front door. Right when I was considering turning around, she reminded me that I needed sleep, I’d heal faster if I slept well. Babies needed sleep, and were spending every night in the very best hands. That was the final boost I needed to keep walking. To get in the car, and to go.

Speaking of blur, the whole 2.5 weeks of their NICU stay, was a blur. I remember a lot of moments, a lot of conversations, a lot of new friends, happy moments and scary ones too. But as a whole, it was a blur. I went in each morning at 7am, and came home each night around 8-9 pm. Marshall was back to work the whole time, so he would arrive around 5 pm, and we’d go home together. We basically came home, ate, showered, and got in bed.

We never really had any super scary days. They were born at 34+1 weeks so overall they were healthy. We had setbacks. After they had graduated back to open bassinets, Bentley was getting too cold again. So he had to go back into the heated crib until his temperatures came back up. It was only a few days. Our biggest struggle was getting them to move towards taking all food from a bottle. I swear this was only stressful for me. I had to remember that bottle or not, they would be fed (they had their feeding tubes).

The thing I try to remember every day, is that we came home. It was all temporary. 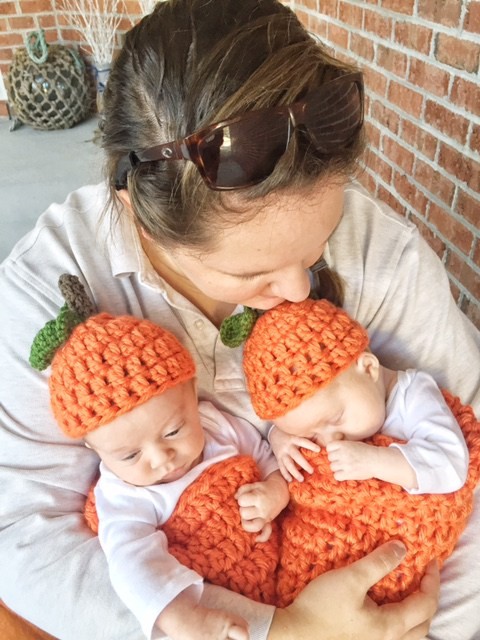 Since we’ve been home, things have been so good. Don’t get me wrong, having two babies is the most insane thing I ever could have imagined. But so far we are all happy and healthy and ready to keep growing!

But this is where I sometimes feel crazy. I know we had an easy NICU stay. I met some families who had it a lot worse. I met some families who weren’t sure if their baby would ever go home. But I feel like at delivery, having them taken away in such crucial hours, really changed things for me. I didn’t get off to the start that most moms do. I missed a lot of time holding my babies. I spent the first hours after they were born scared and confused rather than happy and calm and snuggling my babies. I then spent the next weeks in complete chaos, rather than home with my husband and our new family.

I know things are good now. Things are normal now. And our babies are healthy. But this wasn’t the way I envisioned becoming a mom. I’m grateful for every second, and I am totally and completely in love. But I think the stress of it all has totally stuck with me.

Most nights I have dreams about being in the NICU. Sometimes I have nightmares that we’ve ended up back in the PICU with sick babies. I feel this intense need to go visit with our doctors and nurses, and have the babies triple checked for every possible problem, but I also can’t stand the thought of walking back into that hospital. Sometimes I swear I can hear those alarms going off on their monitors. I feel like I spent a ton of time away from them that I shouldn’t have, and so I feel like I’m constantly trying to make up for that now. It’s nuts, I know. And I bet there are plenty of moms who could have just dealt with it and moved on. But I’m an anxious, nervous person. I’m high stress. And this was the most stressful thing I’ve ever dealt with.

The reward is great! But I can definitely still feel the stress of the NICU, which I know will go away with time. 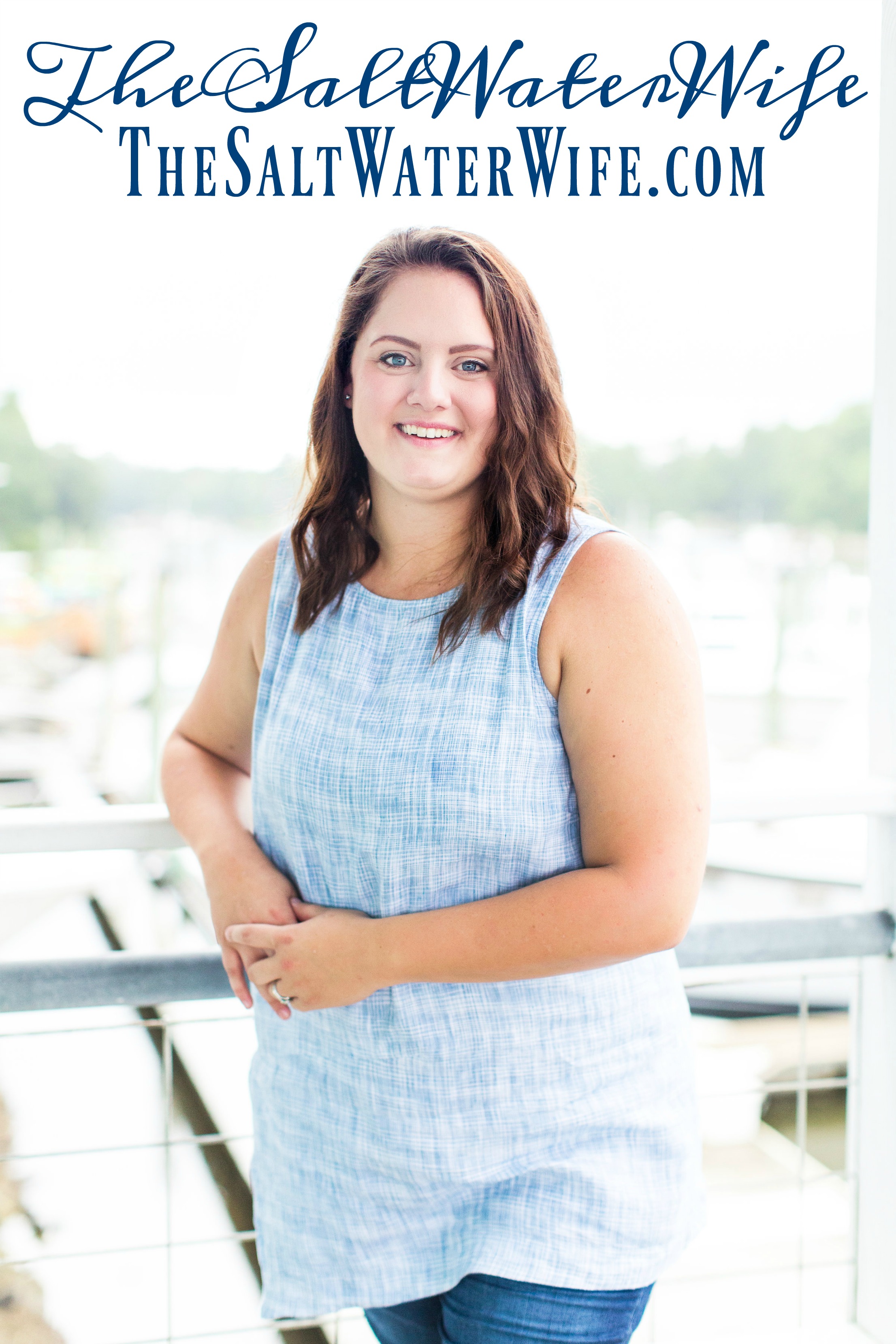 Annalee is a wife and mom from Wilmington, North Carolina who blogs about her family life by the sea! At The Salt Water Wife, you'll find funny stories, parenting fails, and a few of our favorite recipes!