There's no time for dinner, but that's OK

Published by Drew Weisholtz on September 9, 2019

There’s a joke in our house that each year the screw turns a little tighter. That is to say the demands and responsibilities increase from the year before, resulting in less free time as we scramble to fit in all our children have to do.

Nowhere is this more evident than at the beginning of the school year, which is generally accompanied by the learning curve associated with parents falling into a routine based on kids returning to classes and ramping up their extracurricular activities. But what happens when the routine is not so much routine as it is chaos?

Like so many others, my family’s schedule this fall is a jigsaw puzzle of soccer practices, piano lessons and dinners on the go as the pieces we’re scrambling to fit into place.

Mondays are quiet, as we miraculously have nothing going on after our two boys get out of school. Tuesdays? World War Two generals didn’t have battle plans as elaborate as we do for trying to navigate through this day. Our older son, 8, has Hebrew school from 4-6, so my wife races home from work to get him there. Then, we have to zip him to soccer practice from 6:30-8. He’ll scarf something down for dinner in the car (we’ve already dubbed this day “sandwich night”) while we’re in transit. Our younger son, 6, has his own soccer practice at 4:30, at a different field, which ends at 5:30, in time for him to enjoy his sandwich. My wife and I aren’t so much two ships in the night as we are two cars in the sunset.

On Wednesdays, our younger son has a piano lesson and on Thursdays we’re back at it with the same rigorous soccer schedule, complicated by the fact that my wife works a little later than normal, so I keep my fingers crossed that my commute home doesn't include traffic because I have things to do. On Friday, our older son has his turn at piano, while the younger one has roller hockey at a nearby park. 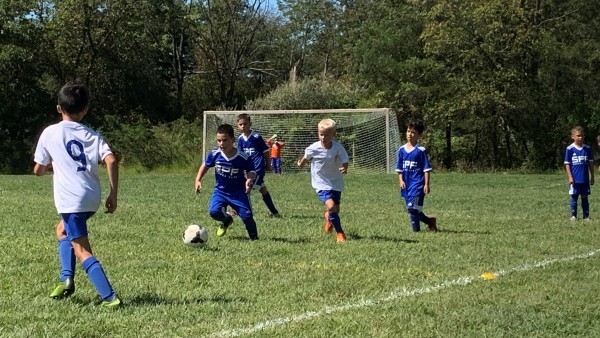 This mad dash around town, though, is merely a dress rehearsal for the weekend, which is especially harried. Our older son has soccer games on either Saturdays or Sundays. Sometimes both. And sometimes multiple games each day. The younger one isn’t quite there yet – he only has one soccer game, on Saturday mornings. Oh, and did I mention our older son is also playing fall baseball? Most games are Saturdays. He’ll squeeze them in, although how he’s going to make the practices that I hear the coach wants to hold is simply beyond me. And our little guy has flag football on Sunday afternoons, a few hours after his big brother is supposed to wrap up his second class of the week at Hebrew school.

Now, I know what some of you are thinking: The kids are overscheduled. I’d disagree. The parents are the overscheduled ones. We are tacking on miles like an unpaid Uber driver while the kids get to taste test all that childhood has to offer. They still have a chance to go for a ride on their bikes, enjoy a relaxing play date with their buddies and do their homework. But they will have things to do and places to go, which is great because have you ever seen an 8- and a 6-year-old with idle time? The crayon stains on our living room walls and bedroom floors strewn with items I didn’t even know we own are exhibit A that it’s not a good idea.

My wife and I want to keep our kids active and engaged. We want them to interact with a large pool of children. We want them to learn, whether it’s musical notes or the value of sportsmanship. We are no different than anyone else juggling their hectic lives. The shared calendar on our phones is a mishmash of what would most certainly look like gibberish to those not in the thick of our day-to-day lives.

The trunk of my car looks like a tornado threw up inside a sporting goods store. It’s a mess and a thing of beauty all at once and I know it won’t always be like this. The interests will most certainly change as the kids get older, tightening that screw once again before it one day loosens altogether and they can take care of themselves, leaving us with something that is currently an alien concept: free time. Right now, though, I’m exhausted just thinking about our days and will be more exhausted once we finally get this so-called routine down. Maybe it’s because I haven’t had time to eat.

That reminds me: Can someone pick us up some sandwiches?