The Way We Talk About Teenage Girls Matters 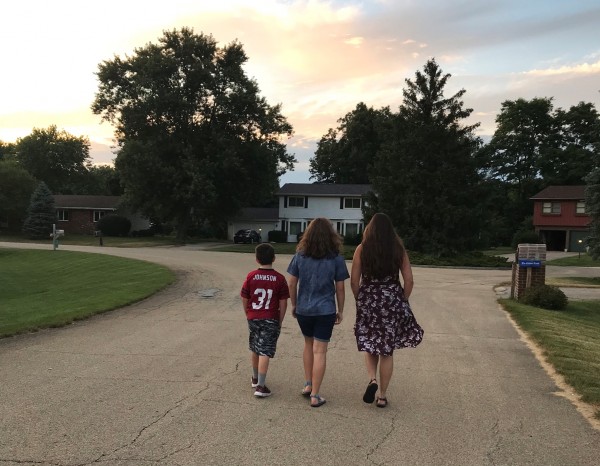 I loved to babysit when I was a teenager, even at the unbelievable rate of $1/ hour (sitters are $10/ hour for high schoolers here in Texas and $15/ hour and up for college students!). I was making my own money, and (most of the time) having fun with the kids.

The summer of my 16th year, I was asked to babysit at a lake party. My colorful one-piece Arena argyle-printed swimsuit covered my entire developing torso, and the kids and I stayed in the shallow water, near the socializing grownups. A voice - just an aside, really - reached my ears as clearly as if he were standing right next to me, even though he was several yards away:

“You could have the babysitter.”

Even now, 30+ years later, I feel the heat of shame reach my cheeks. In that moment, I shrunk inside, trying to hide my body from his leering eyes as he pointed me out to his buddy next to him.

A decade later, I took my first trip to a comedy club in New York City, and I was with a group of colleagues from the U.S. and Belgium. Wearing a red blazer and black jeans and boots, I sat up front, eagerly awaiting the show. We had just had a team dinner, and everyone was in great spirits, laughing together even before the show began.

The headliner walked onstage, and started his monologue. It wasn’t long, however, before he began zeroing in on audience members to incorporate into his act. Zeroing in on me, he made it personal very quickly.

“I’d like to take your head and ram it against the headboard,” he said, making hip-thrusting movements toward me. Several jokes about my body and his imaginations for what he would do to my body later, I sat there in shock. My colleagues didn’t say anything; I have to believe they were similarly frozen.

I have never stepped into another comedy club since then.

As a mother of a son, I made it my mission to ensure he never turned into a man like that. My son was very young when my husband and I started teaching him about the way to treat women, both by words and example. When we would play with his LEGO figures, I played the female characters, and sometimes they got to save the day instead of the male characters.

As he got older, we discussed the way women are portrayed in media and what is unrealistic. He knows the names of all body parts with their proper terms and he knows he had better not lay a hand on someone’s private parts, nor should someone touch his. His body, his choice.

He also knows that words matter. We listen to a variety of music together, and if the song’s lyrics include calling a woman a b%^& or it uses any racial slurs, they are off limits. He knows we don’t listen to Chris Brown because he beat up his girlfriend to the point he sent her to the hospital. I have no space or time in our family for misogyny and abuse.

When I heard the tapes from Tucker Carlson calling women the C-word, I felt sick inside. Being called a “c$%*" is no joke. When Carlson asked, “If you had a wife that dumb, would it be good or bad?” women everywhere hear the derision, loud and clear. When he joked about the Miss Teen USA pageant host having sex with the teenage contestants, I heard that man sizing me up when I was almost 16.

I have heard Carlson and his supporters claim his free speech is threatened. It’s clear they believe that anyone should be able to say what they want. Sure, they can. But that doesn’t mean that they should. And it doesn't mean it should be excused and accepted.

The way we see and treat teenage girls matters.

The way we speak to and about them matters.

If we want a better future for our children, we have to draw a line in the sand and say, no, this isn’t OK. We are not standing with this. We don’t want our girls to be treated like sex objects for the pleasure of grown men. Girls deserve to be respected and loved and cared for. Not leered at and sexualized.

America prides itself on being the land of the free. The home of the brave. And the way I see it, those who are standing up for women – all women, of all colors, all religions, all cultures – are the brave ones. As a parent, it’s my job to teach my son to be the antithesis of the men who are still maintaining a caveman approach. And for him to lead the way by example, in word and deed.

I may never set foot in another comedy club. But maybe if I teach my son how to be a good man, if he ever witnesses something like that, he’ll step in and speak up.

Teen Boys: The Rippling Effect of a Mother’s Touch
Raising a boy to see strength in love, compassion and kindness
He's their dad, not their babysitter
advertisement

Teen Boys: The Rippling Effect of a Mother’s Touch
Raising a boy to see strength in love, compassion and kindness
He's their dad, not their babysitter