The Truth Behind Our "Perfect Day"

I looove behind-the-scenes footage and seeing the blooper reel at the end of a movie. They give you a little insight into what the set was really like, and what the actors and actresses went through to get those perfect shots. (And they usually make you laugh harder than the movie itself.)

Don’t you wish we could see the blooper reel from our friends’ Facebook photo albums? Did their 2-year-old really sit for that perfect sunset shot without getting her dress wet, losing a shoe or throwing sand at her brother? Hmm...

Saturday was one of those days I wished I had a video crew with me, capturing the reality-show-worthy commentary (and occasional meltdown) from my boys. Since I don’t regularly hire a videographer for our outings, I thought I’d give you a play-by-play of what was really happening before and during these beautiful pictures. 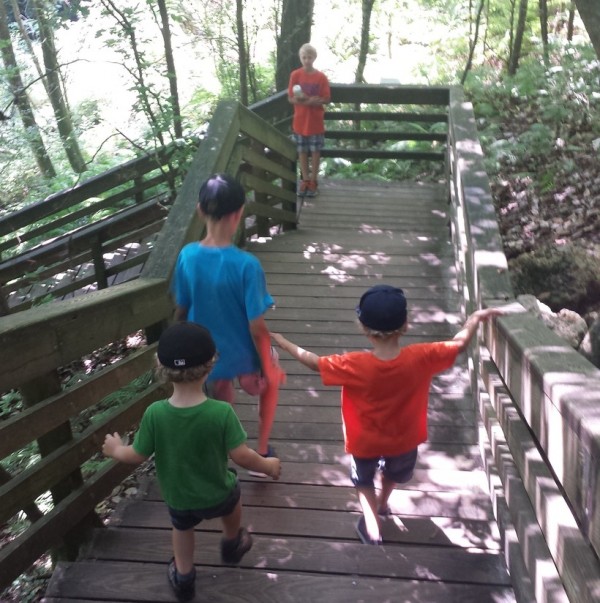 This is the first picture of the day―a cute shot of the boys descending the 212 steps down into the limestone sinkhole.

Blooper Reel: I was already behind them because Miles had run ahead, Sawyer and Carson were racing (even though I was hissing/growling for them to stop before someone got hurt or they ran into someone coming up the stairs) and Finley didn’t want to hold my hand anymore because, “I am 3, Mommy. I can do the steps by myself.”

There are no pictures from the first 30 minutes we were there, for good reason. When we arrived, I walked over to pay the parking fee (it’s an honesty box with envelopes), and one of my little helpers quickly put an empty envelope in the box before I could grab it, and then the youngest lost. his. mind. because I let the 9-year-old put our money in the box. Quick distraction of, “It’s bug spray time!” ended that meltdown. Whew.

All four actually let me spray them down without an issue (yay!) and we grabbed our water bottle and started our walk.

From our car to the Visitor Center, which was approximately 40 steps, we: stopped to look at a squished worm, curbed an argument between the oldest two boys about whether the Visitor Center was big enough for someone to live in, put a shoe back on the 5-year-old, knocked over/picked up a traffic cone, and dropped the water bottle in dirt.

No worries. We’re not in any hurry. This is an adventure,right!? 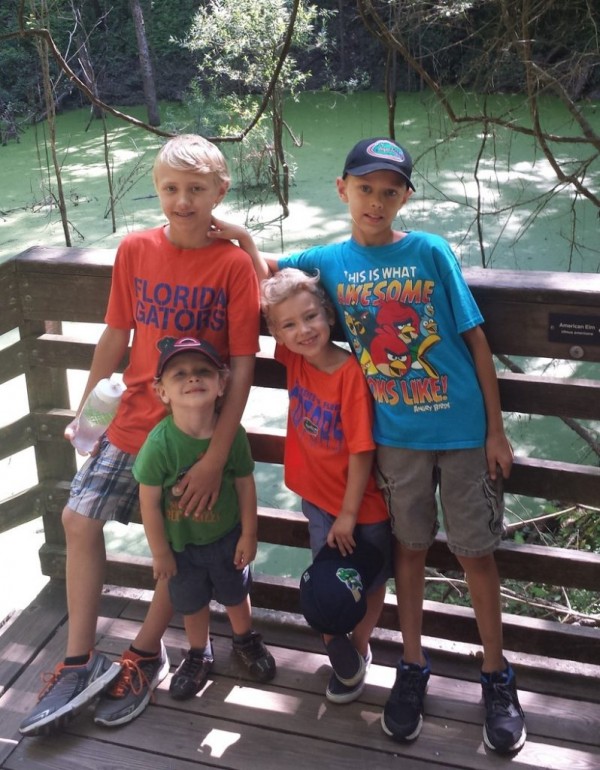 I love this photo. We made it down into the sinkhole and everyone was so tired they didn’t argue one bit about stopping to take a picture, and they even put their sweaty arms around each other.

Blooper Reel: There was a group tour going on to my left, and I heard no fewer than five times, “Wow, she’s got her hands full,” “Whew. Four boys,” and “Wooo, all boys.” Yes, sweet, informative gawkers, I kinda already know what God blessed us with, go back to looking at the geological phenomenon in front of you.

Right after this picture, we politely made our way through the group (I was so proud of my boys’ manners) to reach the other platform and view a little waterfall and what the boys thought for sure was an animal den. I was going to get a picture of the scenery ... and then Sawyer threw a stick into the water, which evoked a gasp from the tour group. I smiled and assured them it was only a stick. Oh, I wish my imaginary videographer had footage of the judgmental looks from the older women in that group. Oy.

As we were heading back up the stairs, Miles dropped the water bottle and it fell beneath the staircase into the mud. We couldn’t reach it and I knew we shouldn’t go over the railing to get it. I was corralling the boys to one side of the walkway, so I could go ask the ranger with the tour group if he could help.

I was stunned that she assumed I would leave it. I just said, “We’re getting it,” and cornered the two littles so they wouldn’t bound up the stairs without me as Miles got the ranger’s attention. (Sidenote: It was not a big deal; the ranger jumped over the railing, grabbed the bottle and handed it back to us.)

Mother Earth had already walked up the steps, but I hoped she was spying on us and saw that I am indeed a decent person and we retrieved the bottle from the edge of the sinkhole.

The walk back up took a little longer than the walk down. Finley sat down on the steps twice because his legs couldn’t “move at all anymore” and I had to scoop him up so a group of people could get past us. I ended up carrying him for the last 100 steps or so. Sawyer (and Mommy) received a few smiles and chuckles from other hikers when he screamed, “Get out of my way, Punks!” as he ran past Miles and Carson dragging their feet. That one is always trying to get the laugh. 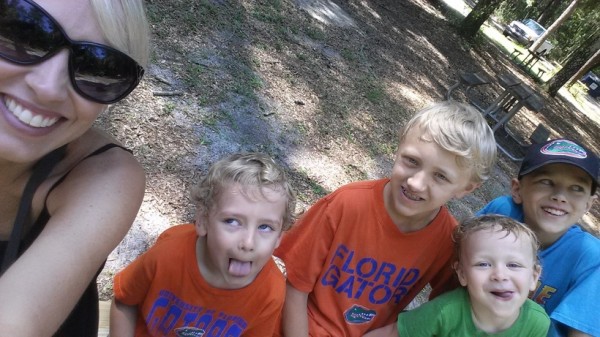 When we arrived back at the parking lot, I got the snacks out of the car and we sat at a picnic table to cool down. And take a few “We did it!” selfies.

Blooper Reel: I took more than a dozen photos and every time at least one of them would duck out of the picture, or close his eyes, or put his head down, etc. Only two photos survived the massive deleting.

There was also a dropped Gogurt (and tears) by Finley, but then all three brothers made him feel better by offering him theirs. And there was a game of “I Spy” that drove everyone crazy because Finley just couldn’t wait for anyone to guess what he spied; he’d just blurt it out as soon as he said the color of the object. And there may have been a few grapes thrown at someone’s head while a Star Wars debate ensued.

It really was a great day. Really. And there were soo many moments that could have made it suck ... but we persevered. We laughed it off, shook it off, and I only had to tell the boys a few times to knock. it. off.

But, we smiled a lot. And when we got back in the car, we laughed some more about Miles’ butter fingers, Finley’s inability to play “I Spy,” and the 20 comebacks to the mean old lady’s scolding that were just now coming to me. And that made me feel like our exhausting Saturday adventure was a success.

See, I actually like the bloopers better in real life, too. :)

Love (and enjoy the bloopers) more,