The Triangle: How our thoughts affect the way that we parent

Published by Susie Garlick on September 7, 2022

When my three children were young, I began work on my Master of Arts in Professional Counseling. In my family studies class, the teacher shared everything we needed to know about parenting styles. I learned that authoritarian parents are very strict, giving little warmth or love to their children. I learned that permissive parents provide love and affection to their children but have little follow through with rules. I learned that neglectful parents withheld love and rules, creating the worst outcome possible. Last but not least, I learned that authoritative parents—long considered the gold standard of parenting—give love to their children while enforcing rules and routines in their homes. I sat in the classroom thinking: I don’t scream and yell at my children very much, and I definitely give them lots of love.

With an imaginary pat on the back and a smile on my face, I gave myself the authoritative label and headed home. The next morning, I woke up to my then eight-, six- and two-year-old children. By school drop-off, I had managed to say things I wished I hadn’t, had blown off at least five rules because they were too much for me to enforce, and had taken away all of their privileges for the week. After dropping everyone off at school, I quickly returned to my car, crying behind my sunglasses. Convinced I had ruined my children, again, I was not the authoritative parent I had labeled myself just twelve hours earlier.

Over my two-plus decades of parenting, I have tried to be an authoritative parent, and many times I am—until I’m not. At certain times, I find myself bouncing back and forth between authoritarian parenting and permissive parenting. I get angry with my children and then feel guilty for how I acted in my anger. Inevitably, in these moments, I shift the way I parent to make up for the way I reacted. I have found the same to be true for many of the parents I have worked with. Some fit into one specific parenting style, but most bounce back and forth between authoritarian and permissive while striving to be authoritative. 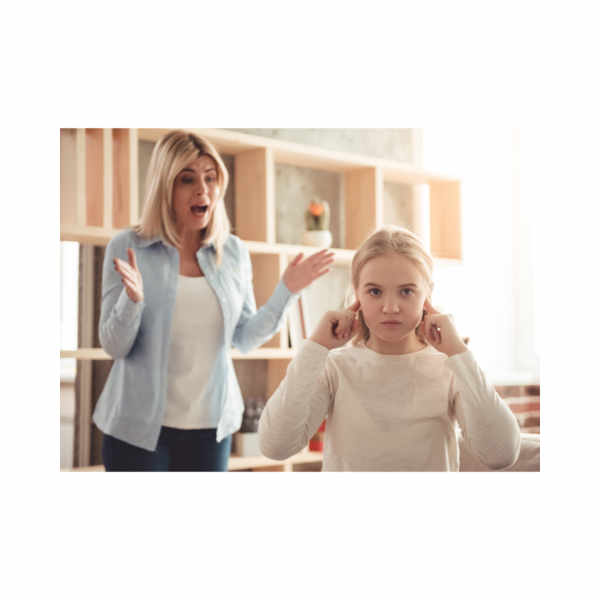 Let me share an example of this from my book, "The Parenting Backpack: Strategies and Tools to Help You Parent with Confidence."

Years ago, I was working with a group of eighth-grade boy moms. They wanted help handling their sons’ group mentality that seemed to be continually getting them into trouble. One specific day this group of moms stormed into my office. The previous weekend their sons had been throwing oranges at passing cars after dark. Neighbors caught them, and in this small community, the news spread like wildfire. One mom took it very hard. Her son had been in trouble many times before, and this was her tipping point. When her son got home from the orange-throwing incident, she screamed and yelled at him. Without remembering the specifics, she said things like, “You are the worst. You always mess up. You are an embarrassment to our family and to me.” She self-proclaimed that it was not a pretty interaction. In her own words, she said it reached the point of shaming, and it put a pit in her stomach.

Her story is not unusual. How many times have you found yourself in the following situation? Your child does something, you get angry, and then you feel so bad about how you reacted that you find yourself feeling guilty. Whether you are the extreme or somewhere in between, you are not alone. Feelings swirl within all of us, and they affect everything we do.

Using what is called the CBT triangle, I asked this mom to work backward from the screaming and yelling and put a thought behind the outburst. She took a deep breath and bravely shared, “Are you kidding me! Is he that stupid? I cannot believe he messed up AGAIN!” 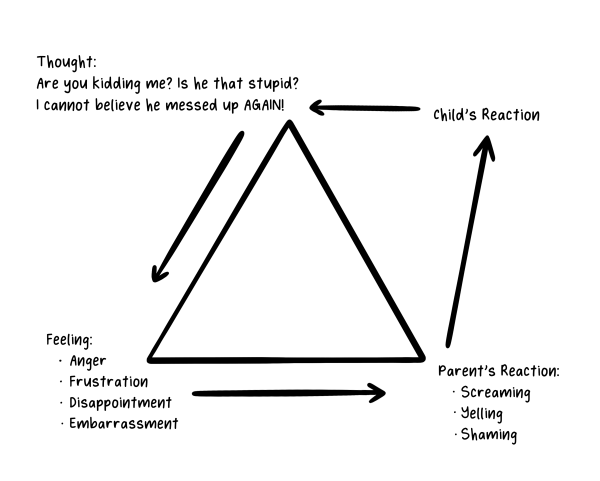 I have done this exercise with many moms, and I have filled in several triangles. It is fair to say that her thoughts were mellow in comparison to some of the thoughts other moms have shared. I have heard everything from expletives to complete anguish. Parenting can be a tough business. I moved to my next question, “What feelings came up when you had that thought?” She quickly replied, “Anger, frustration, disappointment, and embarrassment, just to name a few.”

All the moms began nodding their heads in agreement, and based on what she had shared earlier, we already knew she reacted with screaming, yelling, and in her words, shaming. Her thoughts were creating intense feelings, which created fertile ground for escalated anger. She was in a downward spiral of feelings, and her reactions reflected that spiral. This is an example of authoritarian parenting: 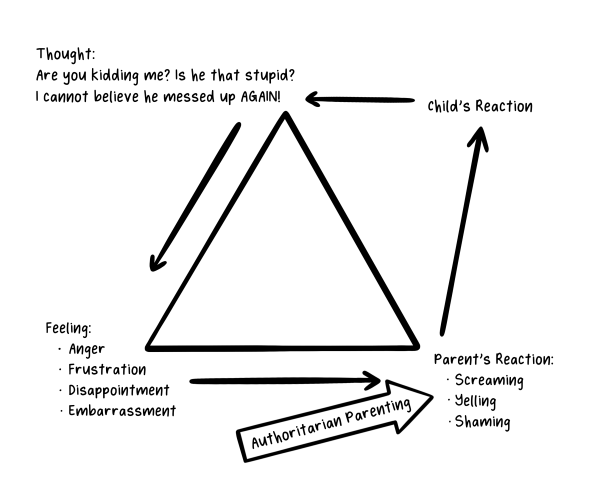 Relationships are a dance of reactions, and a parent-child relationship is no different. We react to something they do or say, and they react to us by doing or saying something back. Children will react in many different ways, but this mom shared that her son replied with an angry, “You always overreact! Nobody else has a mom like you! I hate you!” Not only were there words, but there was also eye-rolling as he stormed out of the room.

After the boy’s angry comments, my line of questioning took me back to the top of the triangle. I simply asked what her next thought was, and all the moms started nervously laughing and mumbling to each other. She said, “I am raising a complete lunatic! He is going to be a menace to society, definitely in jail at some point! He makes me insane!” She shared that, at this point, her feelings were moving at warp speed, and the verbal darts she began throwing at her son were not pretty. Anger, rage, and fury had overtaken her as she screamed, “Who do you think you are talking to me like that? How do you think it is for me to have a son like you who always gets into trouble? You are a complete embarrassment to me and this family!” She had officially hit what I call the crazy corner: 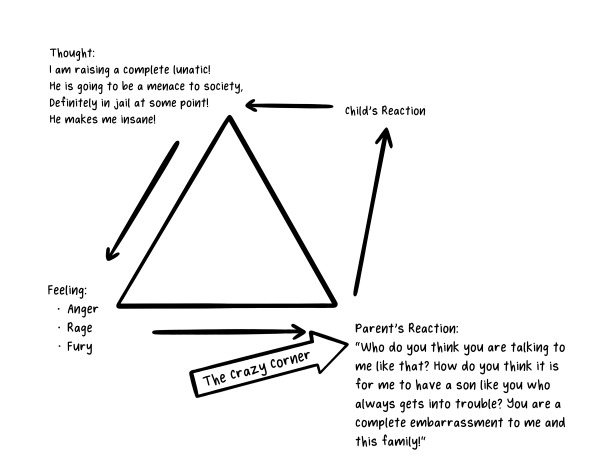 When she shared this, everyone in the room started uncomfortably laughing, agreeing, and comparing notes. It is much easier to laugh at our parenting crazies when we are a few days past the incident, and in this instance, surrounded by a mom clan who had walked in her shoes. However, the reality is difficult. When such a spiral happens, and we are alone, it feels like we are shouldering the weight of the world and receiving a punch to the gut, often leaving us deflated with feelings of hopelessness.

When the group settled down after a flurry of mom bonding, I started my questioning again. “When you got yourself into the crazy corner, how did your son react?” It suddenly got painfully quiet. Speaking slowly, she said, “His eyes filled with tears, and he walked out of the room.” Crickets and Kleenex. Everyone was silent. I gently moved forward, “Okay, let’s take it to the top of the triangle. What was your thought when he did this?” She pointed to herself and replied, “Damn it! I messed up again! I always mess up! I am the worst mom ever!”

She began by throwing darts at her son because she was so angry and ended up drinking the poison because she felt so bad. It is a vicious cycle that we can find ourselves in, and it always shifts the way we parent. It is what keeps us from being an authoritative parent. 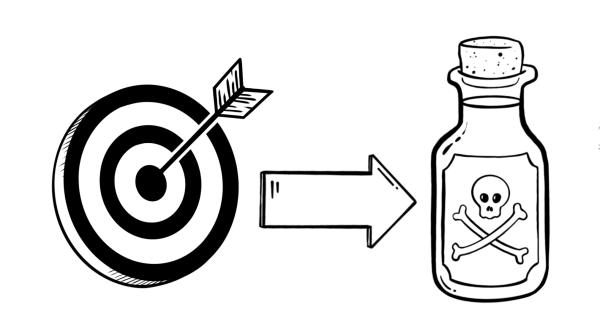 (There is another small percentage of you who are saying, “Huh? That doesn’t sound like me.” You never feel guilty or bad when you are parenting. You feel like your children are always at fault, and you stay in anger. If this is you, you are strictly an authoritarian parent, and your triangle will just keep looping around with anger. Most people will quickly move into feelings of guilt.)

I continued, “How did you feel after you had that thought?” She replied, “Horrible, sad, deflated, guilty, shameful. You name it.” Everyone knew what was next. I asked, “And how did you react?” She shared how she tried to talk with her son to tell him how awesome he was and how badly she had messed up. “Buddy, you made a mistake, but I lost it. It’s not you. It’s me. I am so sorry! Can we forget this all happened and go get ice cream?”

This is an example of permissive parenting: 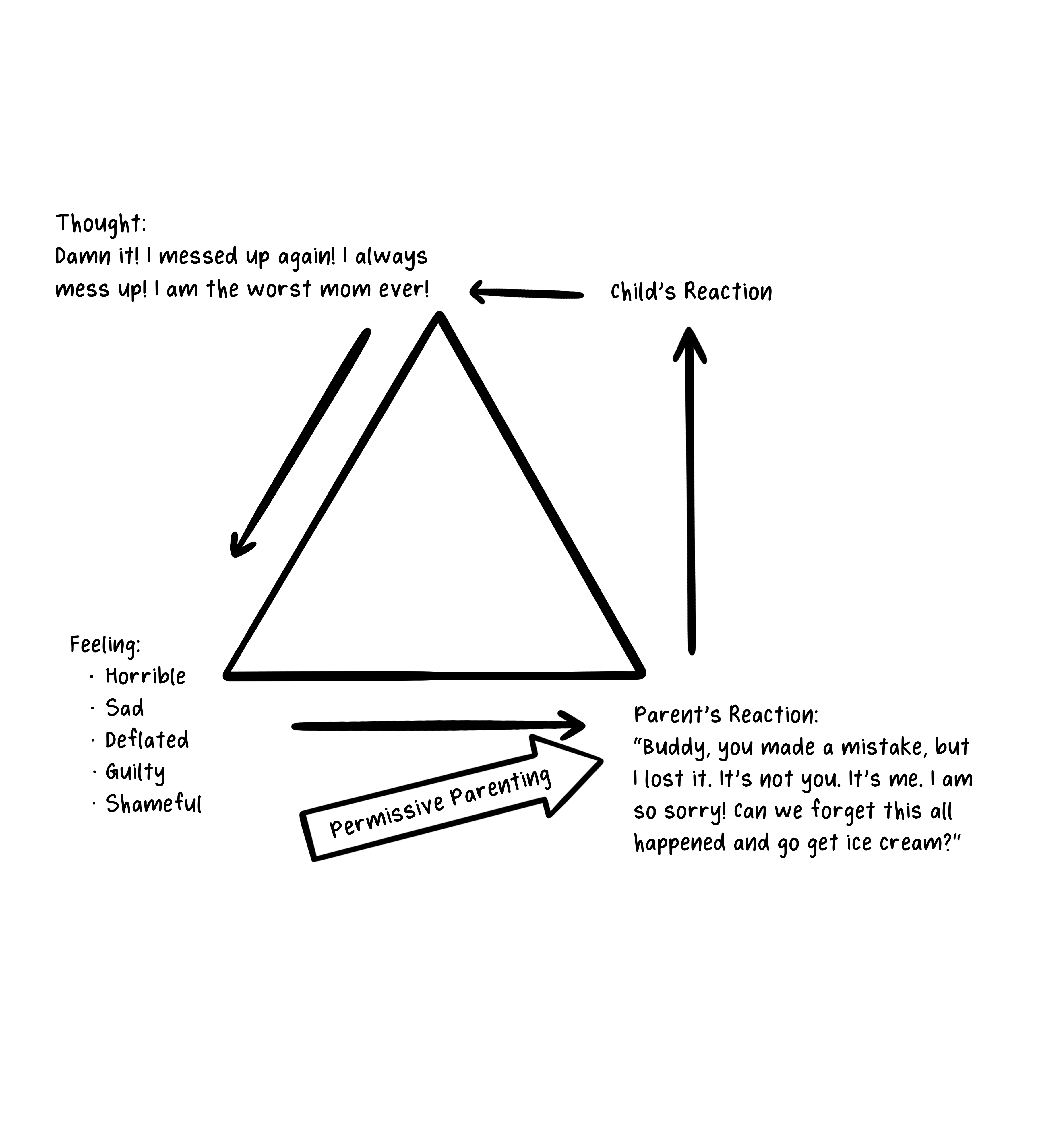 Her son was throwing oranges at cars and needed a consequence, but instead, he was rewarded with ice cream because she felt so guilty about the way she had parented. 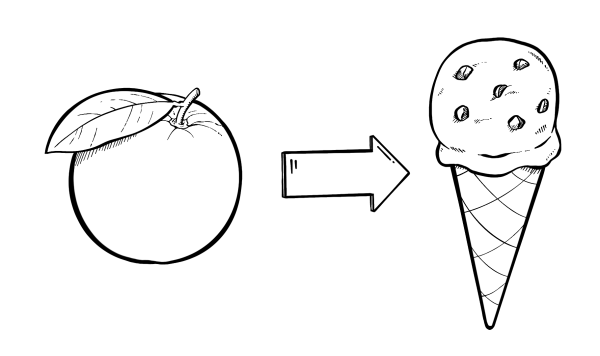 This is just one example of how we shift the way we parent because of our reactions. In order to learn why we do this, as well as how to make a change, check out my book, "The Parenting Backpack: Strategies and Tools to Help You Parent with Confidence," on Amazon today. 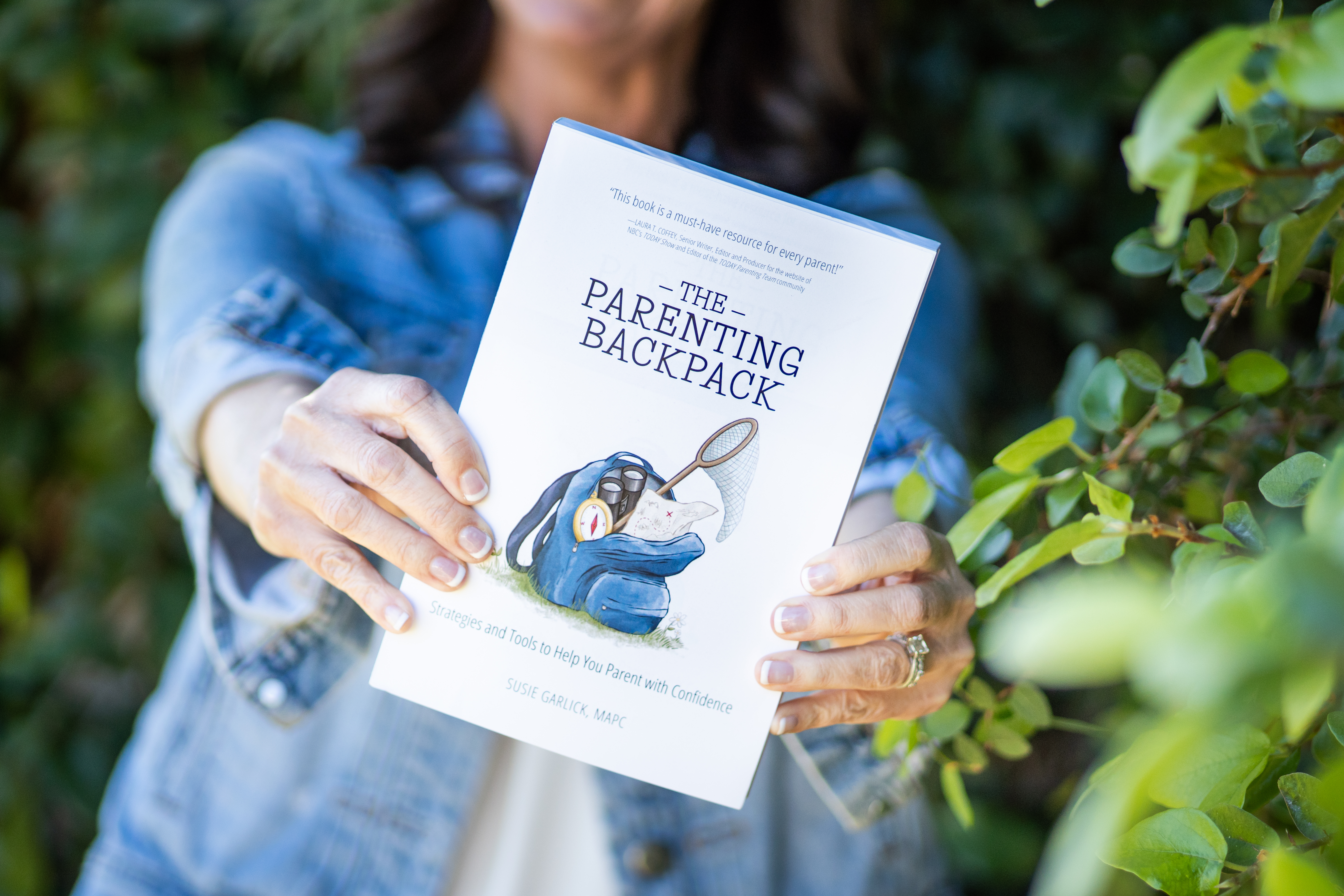 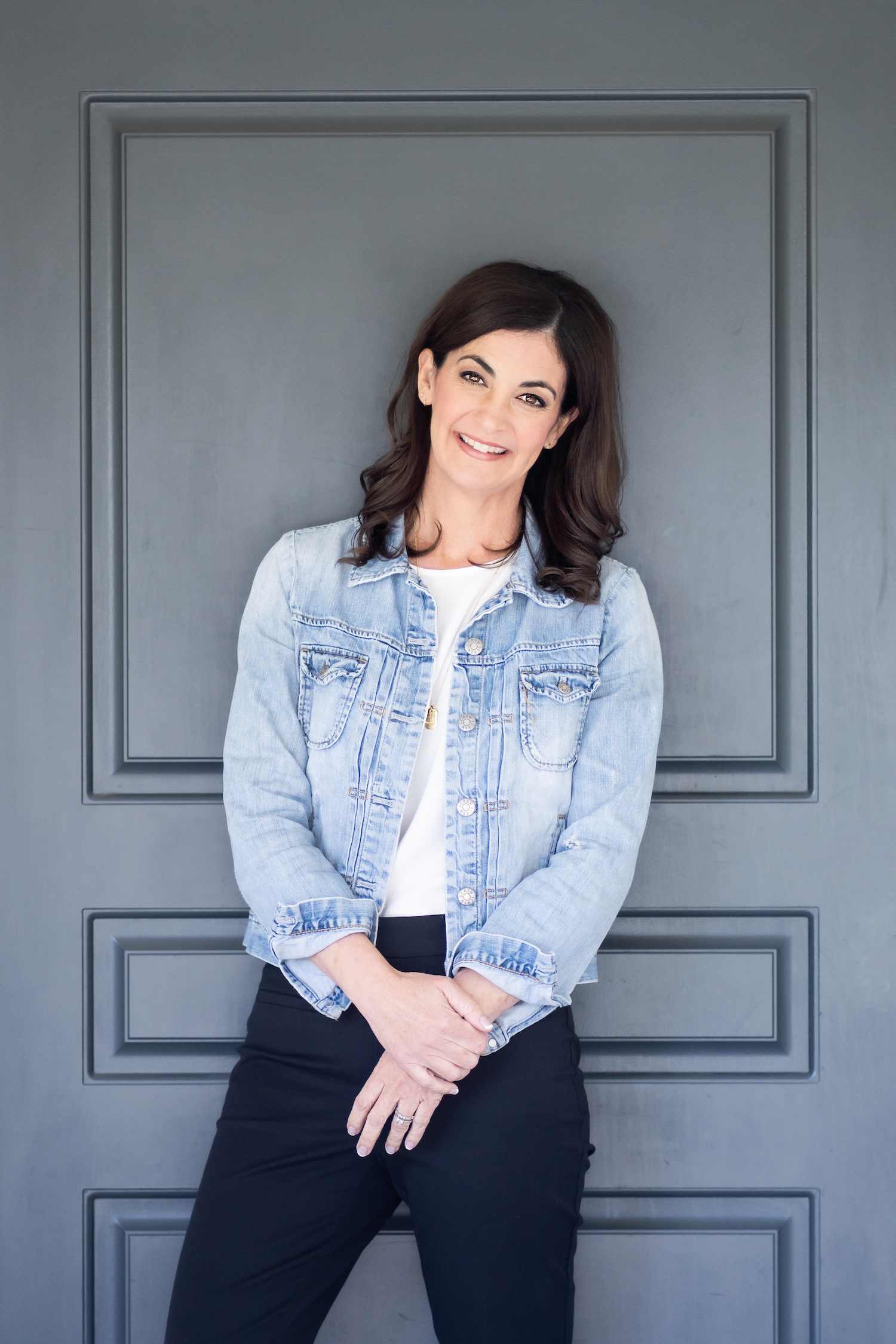 With a Bachelor of Arts in Elementary Education and a Master of Arts in Professional Counseling, Susie Garlick has been a school teacher and a school counselor in the state of Arizona. She is the founder and director of At the Parenting Place, an organization that supports and educates parents. Her latest book, The Parenting Backpack: Strategies and Tools to Help You Parent with Confidence, is available on Amazon. For more information, join Susie at her website, www.susiegarlick.com