The talk I had with my son before school started today

He likes it when I lie down next to him to talk softly before he falls asleep.

“What should I think about, Mama?” he asks me.

I usually say basketball, or Phineas and Ferb, or ice cream. Anything that will give my nine-year-old boy sweet dreams and prevent rare unwanted nightmares. I start to remind him of the fun he had swimming with his friends today and my mind takes a detour. School starts tomorrow, and before he meets a new set of kids in the morning, I want him to begin with an open mind.

“Have you ever had a kid in your class with two moms, or two dads?” I ask him.

He hesitates for a second.

“Do you mean like the mom or dad is gay?” he says.

“I don’t think so…” he trails off, searching his memory.

He looks at me quizzically. 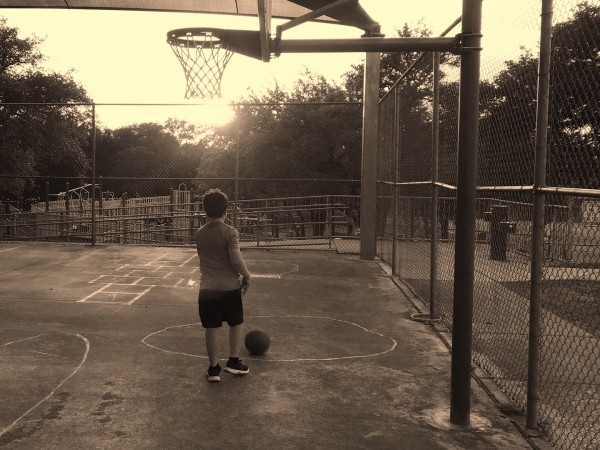 "Of course I know that, Mama. Every family is different and we don't judge them.”

He knows. I breathe a sigh into his hair and then I offer up a story, snuggled up with him as his eyes flutter, sleepily. He says yes, because he always loves a story.

I tell him about Ava, who went to school with me through my elementary school years. Tall and lanky, Ava wore denim overalls or jeans regularly, her hair cropped in a short, straight bob. I can’t recall saying much more than two words at a time to her, even though we were in class together for several years of school.

She was androgynous, introverted, quiet. She kept to herself. Her classmates were confused about whether she was a boy or a girl and we didn’t understand that it didn’t matter. We whispered the word “it” to each other behind her back. It would be easy for me to say that I was young and stupid when I didn’t speak up, and that would be true. It’s not a good excuse, though. I want my son to understand that age doesn’t give him the right to be mean or dismissive or judgmental.

My friend Casey, a single parent who identifies as non-binary, posted on their Facebook page recently, and it has been on my mind: “Even if you FULLY believe that families come in all different varieties and that some kids have no dad! Two moms! Raised by grandparents! Foster parents! Trans they/them! Divorce! Twelve grownups in a commune! Please remember to actually *talk* to your kids about this REGULARLY. Because kids forget. And then they harass my kid about the stuff that you actually already talked to them about but that was two years ago and you don't know what they're saying when you're not there. And my kid is tired.”

So I’m talking to my son. I’m not taking it for granted that he knows that kids and parents come in all shapes, sizes, genders, religions, and colors. Talking about how people are different is not separating them, it’s uniting them under one category: human. Friends of different abilities and of color have taught me that the right thing to teach my kid is not to be difference-blind, but to be difference-inclusive. Talk about how people are distinctive… uncommon… unique… and celebrate those differences. Embrace them.

If I do my job well as a mother of a future adult leader, then I am raising a son who will grow up to be empathetic and kind to all. He will become someone who helps others see that we are all humans. All deserve respect.

We all mess up. We all make mistakes; I’m sure I’ll make a million more in my lifetime. But my plan is to keep learning from them and to be transparent with my son about the mistakes I have made to help him avoid them and to be a better person. So we practice, and we talk, and we role model. Our kids see everything we do; if I were to shrink back from a black man on the elevator or stare at a same-sex couple holding hands, or frown at a teenager with a purple mohawk, he's watching and learning that.

My son told me, “Every family is different and we don't judge.” Hallelujah, kiddo. Let’s be the safe harbor. Let’s be the ones that others run to, not away from.

If he meets a kid who is nonbinary, or trans, or Muslim, or has a different color skin, or speaks another language, or is just a little unusual, I want him to be welcoming, not isolating. Bring that kid in and be a friend.

Kristin Shaw is a writer based in Austin, Texas. For more of her writing, you can find her at KristinVShaw.com for parenting, music, and entertainment, and she's the editor-in-chief at CarsHerWay.com. Her essay and video "I can still pick him up, so I do" has been seen by millions of viewers on the TODAY Parents platform.

Please remember, your nephew is now your niece
Not just Mean Girls- There are Mean Boys, Too.
Co-Sleeping: Why I Share My Bed
advertisement

Please remember, your nephew is now your niece
Not just Mean Girls- There are Mean Boys, Too.
Co-Sleeping: Why I Share My Bed