The Sound that Unraveled Our Trip 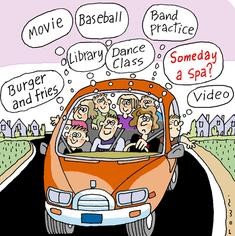 Let me start by saying that we are definitely not the pull-your-kid-out-of-school-and-give-them-life-experiences kind of people. We are the perfect-attendance-suck-it-up-unless-you-are-dying kind of people.

But, with a college departure around the academic corner I was trying to think outside the box.

That’s how I came to be in my kitchen at 8:45pm the Thursday before Labor Day. We were leaving under the cover of darkness to ease my guilt over skipping school and running to the beach for one last hurrah,

I was so organized. A crap ton of food, backpacks full of homework and I had even showered and changed into capris and a quasi-nice shirt which is unheard of for a midnight run to the beach.

I threw all our last minute items in my purse. I cursed its weight when I carried it to the car but I knew we had not forgotten a thing.

All that prep work was pretty out of the ordinary for me and should have been a huge red flag.

Could my sudden mad organizational skills signal that the world was off kilter?

Once we heard the sound that unraveled our trip, I knew the answer was a resounding yes.

It was a combo clank-rumble-whooshing noise that made all of us look back to see what we had run over. But that stretch of Rt. 50 is inky black at 11:15pm so we only saw headlights.

Fresh off a stop for chocolate and coffee to stave off exhaustion from all my packing prowess, I was content to ignore the mystery noise.

Until moments later when the tire stabilizer light flashed; bright orange with danger all over. Whatever we had run over meant business.

Thankfully there was a huge auto dealership ahead like a beacon in the night, so we limped off the highway and pulled in.

In the parking lot, there was a group of people outside an RV and a Suburban; both also victims of the Rt. 50 slasher.

The following moments were like a Laurel and Hardy movie as we all piled out of the car to look at our decimated tire while the dog circled us barking incessantly.

Our fellow deflated, just stared at the circus that had joined them like the show it was. This was how we usually rolled. This I was used to.

Back in my disorganized, chaotic element, I took control. I dialed AAA, gave them our location at the 99 Auto Center, got the dog water and waited.

With a spare tire resting in the undercarriage, we would be on our way in no time. I chose to gloss over the fact that my first day at the beach would be spent buying a tire. But everything is better at the beach, so I assumed waiting it out in the lobby of a tire place would be as well.

My oldest son pulled out his rugby ball and tossed it with his brothers in the parking lot, we chatted with the RV people and wondered what the folks driving by on Rt. 50 were thinking about the midnight party at the 99 Auto Center.

A mere 10 minutes later, our AAA tow truck pulled in. It was massive with an engine that sounded like chains ran through it. The rattle was deafening.

We were the envy of the party; no one else had a rescue in sight.

Our status dipped lower by the minute as the spare refused to dislodge from the car. My husband the AAA guy, the AAA guys’ friend, my sons and some of the RV guys worked on it for the better part of an hour.

The owner’s manual was splayed on the asphalt, rods and tools clanged and half of my carefully organized bags had been unloaded from the hatch and took up a full parking spot next to the car.

I tried to keep the dog from running into traffic while the boys asked Siri for nearby hotels.

Siri informed us of a couple of 2-star options which had vision of bed bugs dancing in my head. One last try revealed a 4-star Holiday Inn Express right down the road. Which was great news except they had a no pet policy.

I was sure that I could devise a brilliant plan if I just had access to my chocolate in the car. But, it seemed like a bad idea to climb around foraging for cocoa courage with four people laying under the car. It was a precarious set-up at best.

Damn. This was karma biting me in the…. tire for skipping school. I just knew it.

The tow truck guy waived the white flag at 12:30am. The tire was not coming out and that was that. He offered to tow the car to a tire place less than a mile away which was also walking distance to the Holiday Inn.

So, my family of five, the dog, the AAA guy and his friend all attempted to fit into his tow truck for the short ride.

If we were a circus, this was the clown car. Open a door too quickly and bodies were going to tumble out everywhere.

As we arrived at our second brightly lit parking lot of the evening, Tires Plus, we attempted to bring only the essentials easily accessible. The kids and I were hitching a ride to the hotel in the tow truck while my husband walked with the dog, so not baggage allowed.

We grabbed phone chargers and one backpack with my son's computer, the most valuable thing in the car. Sadly, my Reese’s Pieces did not make the cut. My car looked so sad there alone in the harsh light of Tires Plus, severely listing to the right to compensate for the blow out.

At the hotel, I tipped the hell out of the AAA guy and got ready for my one act play entitled “Begging the Hotel to Take a Dog.” I ignored the kid's suggestion of pretending Murphy was an emotional service dog. Even though emotions were definitely running high, our excitable Jack Russell was making matters worse, not better.

I just told the truth. We were stranded. Our dog is awesome and trained and I would pay any amount of money to get him in there.

We struck a deal, I would keep him under wraps by using the stairs and she would deny knowing he existed if she was called out on it.

Duplicity is a slam dunk at 1am.

She mapped out all the back entrances, told me about the free breakfast and handed me our keys.

Once in our rooms, I felt like I had aged a decade in the last two hours. I had gravel in my flip flops, my shoulder ached from the weight of my overstuffed purse and I smelled like grease from the tow truck.

My spirits buoyed a little when I realized the bounty in my hand bag, my normal disorganization saved the day!

I had NyQuil for my youngest who was fighting a cold. Toothpaste in my make-up bag. Some dog food that had spilled the last time we went to the beach that I never cleaned out. A dog bone from our last trip to the vet. A brush and deodorant. A fresh roll of poop bags. A plastic container for Murphy’s water and a partridge in a pear tree.

I laid down fully clothed and never moved until my husband's phone alarm sounded at 6:15am. He had a date at Tires Plus.

While he reconnected with our 99 Auto Center friends who were also towed there, the boys and I lived in high style at the Holiday Inn.

Breakfast featured a 3-minute pancake maker and coffee so the boys and I were ready to move in. As I sipped coffee, my phone lit up with texts and calls. Apparently, our adventures had been well documented through the kids’ Snap Chat accounts laced with drama and graphic tire photos.

My husband called at 8:30am saying he was on his way. I reported our absences to all three schools and popped an Advil--also in my purse--to stave off the sleep deprivation headache approaching like a freight train. We snuck Murphy out the back stairs and were ready to hit the road for the beach

At 9am, twelve hours to the minute after we left our home the night before, we were on our way.

Traveling in the daylight made it easier to see any obstacles in the road but it was smooth sailing. We never figured out what we hit even though there were a number of people who were disabled by running over the same thing.

But I did figure out one thing. Disorganization was the highlight of an otherwise deflating experience. When the chips were down, the family and the dog survived essentially because I am a normally a mess.

Turns out I am the pulling-crap-out-of-my-purse-like-a-clown-with-a-string-of-scarves-up-his-sleeve kind of person. After 13hrs, one hotel stay and a high speed blow out, I promised the universe I will never pretend to be anything else again.

The 4 things you must pack for a sane family vacation
Keep calm, and pack booze!
A Terrible, Horrible, No-Good, Very Bad Day in Parenting
advertisement

The 4 things you must pack for a sane family vacation
Keep calm, and pack booze!
A Terrible, Horrible, No-Good, Very Bad Day in Parenting