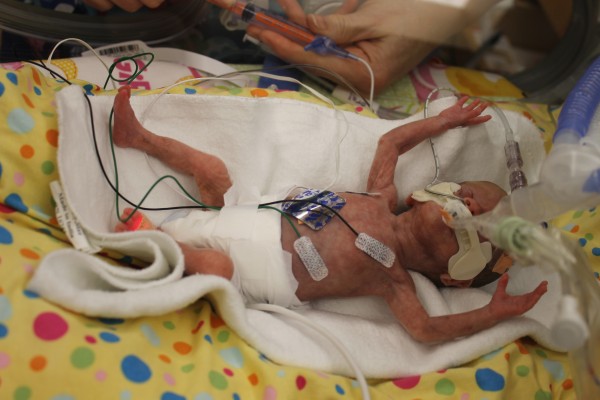 At just 25 weeks gestation I had a high risk doctor appointment with an ultrasound, she had always been measuring small. We thought we were getting discharged from high risk and just going to be followed by our OBGYN. Boy was I wrong! The doctor came in, after the ultrasound tech got done scanning my belly and said "there is lack of blood flow from your placenta to the baby, you need to head down to labor and delivery right now and be hooked up to the heart rate monitors." WHAT! My husband and I were shocked, scared and confused! The doc told us that we would probably have her within the next week. So we did just what the doc said, we went downstairs and got admitted to labor and delivery.

6 hours later our daughter was born by emergency c-section. She weighed 1 lb 1 oz and was 10 in long! No drugs got into her system to help develop her lungs or her brain. So she was at severe risk for brain bleeds along with being on the ventilator for a long period of time, which can do damage in itself. Luckily they were able to intubate her and they headed up to the NICU.

The first time I saw her I was just in shock - all the cords and tubes and everything. Her skin was translucent and there was a machine that was breathing for her. It was heart wrenching to think of how hard she was working to stay alive! That precious little baby is a tiny little miracle.

She had ups and downs in the NICU, just like any baby does. She spent 99 days in the NICU and had a lot of feeding issues along with oxygen issues. She was on the ventilator for about a month and then moved to high flow oxygen and then to wall oxygen. It was a long road. On top of all of that she hated eating by mouth.

We finally got to bring our tiny 4 lb baby home for the first time and nervous would be an understatement. We didn't know what we were doing since we were new parents and always had nurses to help us along the way. After a week of being home I was trying to get her to eat by bottle and she choked and turned blue, stopped breathing! We called 9-1-1 and she was readmitted to the NICU. While in the NICU they did a swallow study and we thickened her food. She was in there for 10 more days and then she got to come home. About a month later she went back into he NICU for aspiration pneumonia. She was put back on oxygen and now had a feeding tube back in her nose going to her stomach. She was in there for another 3 weeks while the docs tried to figure out what the issue was. She came home with a feeding NG tube in her nose and I was trained on how to insert that and check placement, because it did come out, almost daily!

We were home for about another month and she went into the ER for respiratory distress. She got admitted and was back on oxygen at this point. She spent another 10 days in the hospital and came home with a feeding tube and oxygen. More and more tubes! We learned a lot about taking care of such a medically fragile baby, that's for sure.

Because of all of the negativity to her face she developed a HUGE aversion to eating and refused to even put her hands or toys to her face. We started working with an AMAZING speech therapist for Feeding and it has been over a 2 year journey with her.

Our daughter has a PT, Speech and dietitian along with the separate speech therapist for feeding since she was 10 months old. A week from today, November 17, she will be 3 years old! (This is also Prematurity Awareness Day!) She has caught up developmentally. She doesn't need any therapists anymore other than her feeding therapist. She is eating everything by mouth and drinking by mouth, but we are still working on chewing. She has only been eating solid food for about 3 months. Before that she would only eat pureed food.

She truly is a miracle baby. The doctors and nurses didn't think she was going to make it through the night, the night she was born. She has dealt with a lot of things in and out of the NICU, but the only thing that has been her biggest struggle is eating. it has taken her a long time to get to where she is and be comfortable with eating and she is finally to that point.

Today is a happy, almost 3 year old. She is super small and we have started growth hormone therapy for her because she isn't growing like she should be, but hopefully she will catch up! We couldn't be more happy to have her in our lives! She is truly an answered prayer and a blessing!!

Grady is Preemie strong!
The Roller Coaster You Never Intended to Ride
“The Best Laid Plans...”