The Music Stopped, But She Didn't 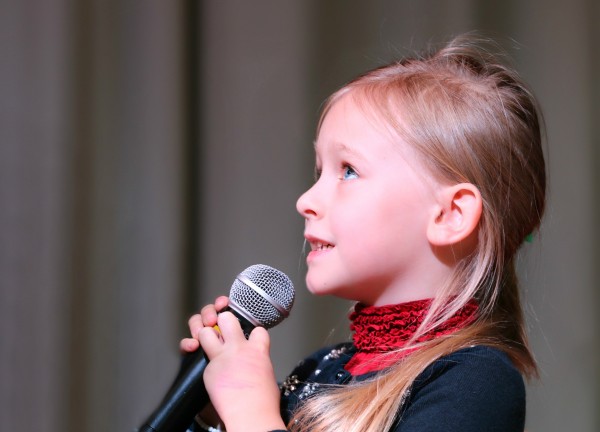 The music faltered, and she looked frantically to the side but kept going.

It skipped one beat too many, and a look of panic on her face could be seen from the back row.

We all shifted nervously in our seats, getting ready to start belting out “Part of Your World” in a chorus if the 12 year old girl on stage stopped singing completely.

Then something magical happened.

As the stage crew for the elementary school play, Little Mermaid, Jr., waved their hands encouragingly to say “keep going!” the music stopped altogether. But she didn’t.

The entire audience sat in stunned silence as 12 year old Ariel sang the rest of the song we all knew and loved from childhood without leaving out a single word, or a single ounce of emotion. Her strong voice told us all that she wanted to be where the people were and see them dancing, and we believed her.

I felt tears well up in my eyes as she seamlessly transitioned from one stanza to the next completely a Capella. Every adult in that audience thought she was going to need us to save her, but there she was, saving herself. And giving us an enormous gift.

She gave us the gift of being transported in time.

flip around under the sea and use a fork as a comb.

We went back to our own adolescence, wondering if we could have stood on that stage alone and been so strong.

We went back to yesterday, wondering if we could have stood on that stage alone and been that strong.

I think most powerful for me was when I mentally transported forward in time though. As I sat with my two year old and four old next to me on the bleachers, I started to picture what amazing accomplishments they were going to have completely separate from me.

Would they be up on that stage someday? Score the winning goal? Ace the test? Wave their hands with a smile and encourage someone else to be brave?

There are times when the chorus of “Mommy, help me!” is loud in our house. But then come the echoes of “I can do it myself!” We are in a ping pong game of help, don’t help, you can do it, I’ll do that for you.

It’s as age appropriate as it is confusing.

But as they get older, the “I can do it myselfs” won’t need to be shouted from the kitchen floor. They will be unsaid, and completely true. My kids will certainly be able to do it themselves, with me watching from the back row.

The song came to a close and you could hear a collective breathing out across the elementary school gym. She did it. All by herself. The applause thundered and people jumped to their feet. It was only halfway through the show, but the ovation felt necessary.

I turned to my kids beside me and they clapped along with the crowd, not understanding the accomplishment of that moment, but appreciating the princess on stage wholeheartedly.

Then I turned to my friend sitting behind us, a fellow parent with two young kids in tow. I said “Wow… I got choked up during that…” fully excepting a good-hearted ribbing for being so emotional.

Instead he said “me too.”

Bullying is Handed Down From One Generation to the Next
Happy F!%# New Year
Thank you, Nurses.
advertisement

Bullying is Handed Down From One Generation to the Next
Happy F!%# New Year
Thank you, Nurses.