The (Mis)Adventures of Batman and Robin: How to Teach Toddlers to Share . . . or Not 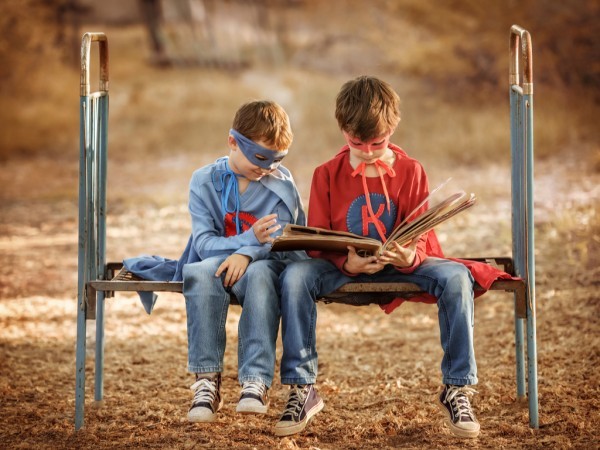 The topic comes up every few months: “Dr. Damian, when I look at our family pictures, I get the feeling that something is missing, that our family isn’t complete.” I keep my mouth shut and calmly wait for the next time my wife volunteers to babysit a friend’s child for an extended period of time. Parenting an infant is hard, an egocentric toddler: inconceivable. But there is hope, even in teaching your self-involved tot to share.

Terrible twos? Meet Batman, my two year old. As my father-in-law proudly proclaims, my son is the most “boy” boy that has ever lived. My eight years of experience working in child development are of no help in my attempting to get my Alpha toddler to share. Neither is time-out, verbal instruction, or any other method we have tried. What’s his is his, what’s yours will soon be his, usually taken with brute force.

Batman has a best friend. Let’s call him Robin. They see each other five days a week at daycare, yet when they get the opportunity to hang out at the park or splash pad outside of “school,” they flip out like Generation Xers at a New Kids on the Block concert. I have a heart—it’s precious. Robin is three years old and, for lack of a better term, much less physically aggressive than Batman. In other words, it is possible to verbally instruct him to do something he might not want to do without an impending double-leg takedown or having him climb onto the back of the couch and leap at you in search of a WWE-style headlock. On the other hand, as a three-year-old, Robin doesn’t actively seek opportunities to let others wear his cape. Robin is a sleepover regular at the Rodriguez home, which always sounds like great fun . . . until about hour two when the best friends begin battling over Tonka® trucks and plastic pirate swords (and the capes). The Dynamic Duo quickly turns into the Terrible Twosome. We all love Robin: he’s a great reminder to my wife that two children are enough for us.

No matter how much research I do, real life reminds me daily that I can’t science my way through this parenting thing. But that isn’t going to stop me from trying. Lucky for me, contemporary research is beginning to change how we address this toddler conundrum of getting our babies to share. Let me present Prosocial Behavioral Theory. No matter how much you try to get someone with Asperger’s to be social, it isn’t going to happen. Similarly, no matter how much you tell a toddler to share, you are going to be disappointed—each and every time. By the time they enter toddlerhood, children are socially intrigued by each other, but don’t let the smiling face and timid pats on the head fool you. They are inherently egocentric beings. Put a few of them in a room and ask them to share snacks and toys, and start the countdown to Lord of the Flies.

So what is the answer to domesticating a herd of rug rats and getting them to share? Child psychologist Celia Brownell has devoted her life to attempting to understand how children socialize, and with a list of peer-reviewed studies taller than your toddler, the one thing she is sure of is that we don’t know what children already know and telling them isn’t going to change that. In a study she conducted with colleagues from the University of Pittsburgh, Brownell found that verbally telling children to help another person (in this case, bringing a needed tool to an adult at the top of the stairs) was like asking Batman to give Robin some of his fruit snacks: fruitless. However, modelling helpful behavior greatly increased their cooperation. Toddlers aren’t especially philanthropic, but the disconnect isn’t necessarily that they don’t want to share or help, it is that they don’t understand what’s being asked and words aren’t necessarily going to change that. In two other related studies, Brownell found that children are significantly more likely to share once they understand (through active modelling) that you are a different person (with different needs than theirs) and that their cooperation may elicit mutually positive feelings. Further research has shown that verbal affirmations or rewarding children for sharing often backfires, as they begin to perceive sharing as a negative thing that they need to be compensated for.

The first step to teaching children to share is to model cooperative behavior. Whether it is eating their vegetables, putting their tablet down and going to play outside, or allowing Robin a few minutes swinging his plastic Mjölnir (for the uninitiated, that’s Thor’s hammer), the expression “Do as I say, not as I do,” doesn’t work. Toddlers don’t recognize the importance of sharing when you tell them to, and rewarding them for it simply confuses them. But lucky for us, toddlers have an unquenchable desire to mimic the behavior of the role models they are surrounded by.

Be patient. When it comes to sharing, positive and negative verbal responses only obscure children’s comprehension of proper social behavior. And again, we don’t really know what children already know. Every child is different. It may take some time for them to recognize that the needs and wants of others may not perfectly align with theirs, but the ideas of autonomous prosocial behavior will come.

Lastly, provide your child with regular opportunities to be part of the decision-making process. Allowing children to help with dinner preparation makes them more likely to make healthy food choices, and it is no different when attempting to teach proper social etiquette. Take turns sweeping the floor by allowing them to choose a specific area of the room they are responsible for before handing back the broom for you to finish the job. It may prolong the chore, but it familiarizes children with the concept of cooperation and compels them to ponder the relationship between their actions and the needs of others.

We are greatly looking forward to Batman and Robin’s next adventure. Really, we are, just as long as we have some downtime to model prosocial behavior to our little Dark Knight first. Lay the foundation of sharing by being the change you want to see, exhibiting patience, and by presenting children opportunities to make their own choices, then sit back and watch as they take turns with the blue light saber.

Research Reveals the Real Reason Why You Lost Your Temper with Your Toddler
How To Raise Selfless Kids In A Selfie World
​Raising kind kids: an age-based guide
advertisement

Research Reveals the Real Reason Why You Lost Your Temper with Your Toddler
How To Raise Selfless Kids In A Selfie World
​Raising kind kids: an age-based guide