Of all of life’s pleasures that are wasted on youth, the most overlooked is the luxury to indulge in a bad day.

Children can throw themselves on the floor wailing and moaning over a seemingly inconsequential disappointment.

Adolescents can walk around sullen and slam doors, just because they feel like it.

Brokenhearted college kids can curl up in the fetal position, play sad songs, put a straw in a bottle of wine, and sleep for 18 hours.

Because sometimes it feels good to just wallow.

But wallowing is an extravagance for the young.

Middle age, flanked by the twin pillars of obligation and responsibility, affords no such luxury.

We only have time for a moment. In the carpool line. Standing at the stove frantically trying to make mac and cheese from a box because we didn’t get to the grocery store. In between conference calls or meetings. In the shower. In the middle of the night when everything is quiet.

Last night I stood in my kitchen around midnight, finally unloading the dishwasher. As I enjoyed the simple satisfaction of methodically putting away plates and sorting utensils, I was suddenly overwhelmed. By all the ways in which I over-obligated myself this fall and all the ways I am underperforming in those roles. By the glaring stack of unwritten thank you notes. By the exhaustion of not having slept in weeks. By the weight of shouldering other people’s grief. By the gut-wrenching pain of having a child in pain. By the ache of being disappointed by a friend.

I was overwhelmed by not having the luxury of wallowing in a bad day.

And for the first time I really missed my dad. 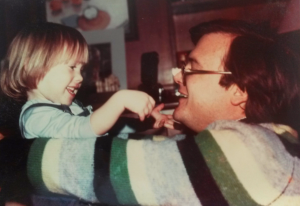 Maybe because nighttime was our time. We were both nocturnal creatures. Even at a young age, when I couldn’t sleep I would go downstairs in the middle of the night and find him reading in the den.

Sometimes we would talk, but more often than not, I would just lay on his chest while he read, my head moving up and down with his breathing. In time, both my heart beat and the frenetic thoughts in my head would slow down to match the rhythm of his breathing and I would fall asleep.

In later years, when technology replaced our late nights on the sofa, I would call him in the middle of the night to talk about a paper I was writing or a boy who had broken my heart. He would help me work through the complexities of James Joyce and Secured Transactions law or just tell me some arcane fact about how Steven Spielberg filmed Jaws. And even though we were miles apart, he could miraculously change his cadence or the pitch of his voice to lull my heartbeat into a more even rhythm.

But not last night. Last night, I had to do it myself.

I sank down on the kitchen floor and envied my children who still get to have complete meltdowns. I don’t begrudge them those moments. I understand them.

Because it’s not really about whether Will broke Jack’s Star Wars Lego ship or whether I told Will he couldn’t wear a jersey to school. It’s because they are overwhelmed by disappointment and anxiety and sadness that they cannot identify.

And what they need in those moments is not a time-out or a lecture about letting the little things go. What they need is for me to hold them tightly. To let them cry. To let them be angry at the world. To lull their hearts back into a more even rhythm. To make them believe it will all be okay.

Because it will. It’s just a bad day.
#LoveHard