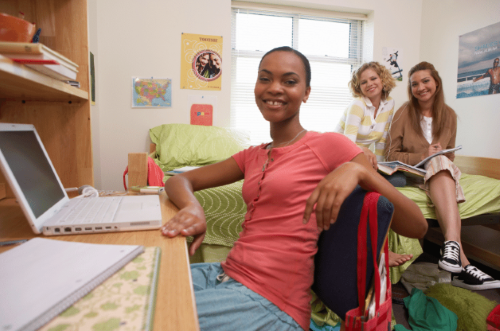 A few weeks ago, I was already counting down the days I had left with my oldest before she would leave our home for college. We still had a vacation to look forward to, and I still had just over two weeks to spend with my daughter after vacation. I was feeling stable.

Then, she came into my room and told me she had decided to spend one of the last two weeks as a counselor at sleepaway camp. I said what I needed to say, which was, “That sounds like a great opportunity!” She went back to her bedroom, and I went to the laundry room and cried like a baby.

In between sobs, I texted a friend who is familiar with the camp in question and has also survived a college send-off. I told her I was losing a week with my daughter and I really didn’t want her to leave that week, and that I was texting her in lieu of falling at my daughter’s feet, wailing and begging her not to go.

I hope you all have at least one friend who always says what you need to hear. This friend of mine speaks matter-of-factly and doesn’t embellish or succumb to emotion like I do. She said, simply, “If it helps, saying good-bye wouldn’t be any easier if she were home that week.”

You know how when you hear what you need to hear, it stops you in your mental hamster wheel? Maybe it’s just me, but when I hear what I need to hear, it’s like a gong goes off. That sentence stayed in my head for weeks, knocking around until it got processed into this blog.

I thought all the way back to when she was 3 months old and I was dropping her off at the Montessori school so I could go back to work as a pediatrician. The first day, I was supposed to stay with her in the classroom for an hour and then leave for an hour. The staying-for-an-hour part was easy. I basically hadn’t put her down for 3 months at that point.

But when it was time for me to leave her for an hour, she was rooting around with hunger cues. I sat back down in the rocker and told the instructor I would nurse her before I left. She gently responded, “We can feed her. It is good for her to get used to us. You can go.”

She was right, but damn, it was hard to walk away from my baby. I basically drove around in my car, called my mom, and cried for an hour before I went back and picked her up. But as my friend said 18 years later, staying there to nurse her for 20 more minutes would not have made walking away from my 3-month-old any easier.

The hard things just have to be done in parenting. Putting them off just puts them off, but they’ve got to get done, and they certainly don’t get easier 20 minutes or a week later.

The same went for walking away from her sitting in her tiny kindergarten chair, in her navy skort and white polo shirt, a nervous look on her face. The same went for walking away from each new day camp and first day of school and dance class. That time she refused to get out of the car because she didn’t know anyone at a party and I forced myself to force her to walk in and face her insecurities. That time she didn’t want to walk up to the middle school for her guitar audition through a throng of kids sitting on the steps.

Dropping her off at the first day of high school, and later refusing to take her the AirPods she forgot in my car, even when she said “If I don’t have them, I have to make eye contact with people in the hall!” All the hard moments were, as my mom calls them, growing edges. And through that growth and the hard moments, what an amazing young woman she has become.

Now we’re in the last week before college drop-off, and it’s awful. Well, it’s not all awful. We’ve celebrated her 18th birthday with family and she’s hanging out with friends from high school, having those tender moments before they step away from each other into adulthood. We’ve bought what we need to buy and she’s starting to pack up her room.

I feel fine, but there have been signs that I’m not fine, like when I woke up at 3:00 a.m. this week wondering how to put a deadbolt on the inside of her bedroom door at college so no one can get into her room. Like when we were at the UPS store notarizing the medical power of attorney forms since she is now 18, and a friend walked in and said hello, and I started crying.

But here is what I have to remember this week as I drive her to a university campus and have to do the hardest walk-away yet. All the other moments have brought us to this point. I can see now the benefits of her Montessori daycare and the awkward auditions and parties and day camps she didn’t like. I can see the past growth, and I know that the next few years have the potential for exponential growth as well. I’m just going to miss her so much.

Some may think I’m a smothering mom, but had I been a truly smothering mom, like more smothering than I am, I could have crippled or clipped her wings so that she couldn’t fly from our nest. And that would be worse than walking away from her this week and walking into this new stage of parenting. I am grateful she is ready and equipped to fly.

The same friend gave me more advice today about this week. “You know that saying good-bye will suck. Do it outside where it is hot and needs to be quick. Let her walk away. Take a pic. Then leave. It’s brutal no matter what.”

Walk Away Know when to pull your kids closer, and know when to walk away.
Tears at the Window: Facing hard situations leads to baby steps of developing confidence.
Middle School and Menopause: The joys of sleep-away camp
advertisement

Walk Away Know when to pull your kids closer, and know when to walk away.
Tears at the Window: Facing hard situations leads to baby steps of developing confidence.
Middle School and Menopause: The joys of sleep-away camp