The Challenge Of Raising A Gentle Giant

He wasn't my first-born, but the moment they placed the sweet little bundle of boy in my arms I knew there would be different challenges in raising him. He was a healthy baby and thankfully those challenges wouldn't be of the medical sort, but the difference in raising a boy are always present. As he entered the years of playgrounds and sandboxes, there began the instances of little boys wanting to play a bit rougher than I had witnessed my daughter and her playmates at that age. Pushing and shoving, sticks in the air, and mutterings of "boys will be boys" filled the playground and my little guy's world. They also filled my heart with trepidation and a little despair as I wondered how I would raise the kind of man I wanted my son to be, the kind who was compassionate to others, who was aware of someone's need and was willing to help them, the kind who would be strong yet gentle.

Inevitably, my sweet little boy gravitated toward sports, specifically football, and I was faced with yet another challenge. Raising a boy to be tough in sports can be a double-edged sword. Even with the best of coaches, and he's had some amazing ones, the sidelines are filled with shouts to "tackle harder" and "get that guy" and "you're tougher than that" none of which are intended to encourage aggression off the field, yet teaching them to leave it all on the field takes constant reminders and discussions I wish I didn't have to have with my son at such a young age. A love of sports comes with an interest in professional athletes some of which didn't learn to "leave it all on the field" and are in the news for domestic abuse, animal abuse, and other behaviors that maybe stem from a belief that they are invincible and will hear the cheers no matter what they do. It's not that I don't expect to have these tough conversations with my kid, but having the "when a girl says no, it means no" conversation was one I thought would come a bit later in life. 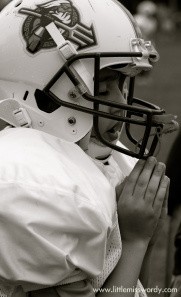 5 Things I Want My Gentle Giant To Know:

1. Being a great athlete is more than being great on the field. The world is your field and when your days of sports come to an end, it is on this field where your performance will truly matter.

2. When a girl says no, it means no, but she shouldn't have to say no. You should be aware if she's uncomfortable and back off. Truth is this goes for anyone in any situation.

3. Always be the guy who stands up for what is right instead of the guy who lingers in the background, knowing he's witnessing something very wrong, but is uncomfortable speaking up.

4. Don't get caught up in messages like "man up" and " real men don't cry" and the idea that men are superior to women or that being part of a wolf pack ups your cool factor. Be you, whatever that looks like.

5. Be aware of your surroundings in all you do in your life. Being present and being aware of those around you will make you the best person you can be as you will be truly in touch with others and those who might need a little compassion in their life.

As a mother of a daughter and a son, I share this advice with both and try to raise my children equally. The truth is the world still demands differences from each, sometimes subtle, sometimes not. I encourage my children to be the best they can be in all they do, including sports, and I am always their biggest cheerleader. However, it is my job as a parent to have the difficult conversations, to constantly remind them of what is truly important, to raise compassionate human beings no matter their gender.

I'm raising champions, but I also choose to raise gentle giants.
What do you choose?

Leah Vidal is a freelance writer, published author and blogger who enjoys time with her family, avoiding the kitchen, and making words come to life. Her writing focuses on BIG lessons from life's little moments.

It's an honor to raise a boy
Moms will be moms, and the world will be better for it.
I Don't Have a Girly-Girl...And That's OK
advertisement

It's an honor to raise a boy
Moms will be moms, and the world will be better for it.
I Don't Have a Girly-Girl...And That's OK