The biggest kid in the NICU! 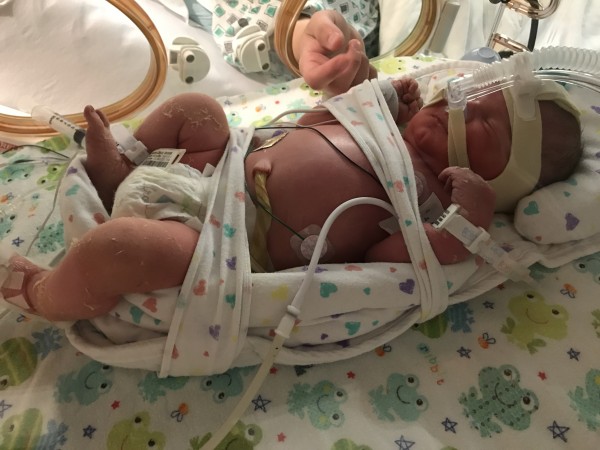 At 40 week + 2 days the last thing you expect is weeks in the NICU, but it was my first baby so what did I know? After going into the hospital because I wasn’t feeling the baby move, they decided we needed to do an emergency c-section. Our baby Max had a bowel movement and was born with meconium aspirations. He was 8 pounds and 4 oz and 21 inches long. I barely heard his weak cry before they hurried him off and he was immediately put on 100% oxygen. The days to follow were a roller coaster to say the least. Low blood sugar, platelets, white blood cell count, seizures, and they didn’t really know what was causing it. After pumping him full of dextrose and not being able to stabilize his sugar, they decide on steroid treatments. This finally starts to turn the corner after up and down reads on sugar and platelets, taking his blood every 3 hours to test, transfusing him etc, the steroids finally started to level it all out. 16 days later, after our stubborn baby was finally eating on his own and settling into a normal baby, we got to take him home. We visited him every day all day during that time and on the last day, we came in he was not in his crib. We walk over to find him in a little swing outside of the nurses station while they were eating lunch! He just wanted to be a part of the party! Those nurses and doctors were the most amazing gifts our son could have had in his first days of life! Each and every one of them cared for him like family and it made that difficult time just a little bit easier. These women truly love what they do!