The Beauty and Challenge of Being 35 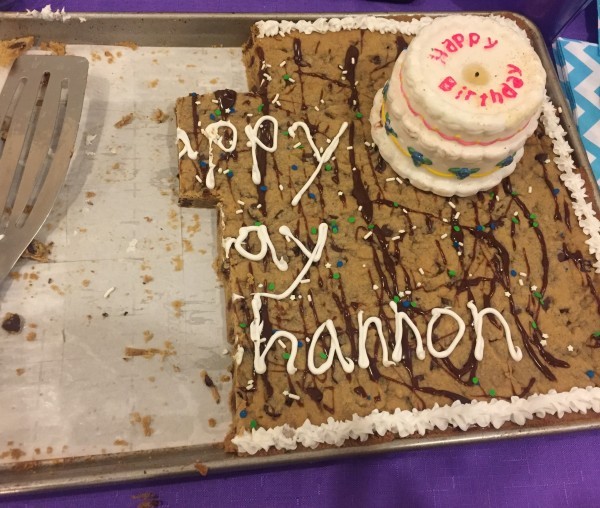 What’s that?” my almost two-year-old asks, his constant question. He points at a circle of water on the pavement, rippling as droplets of water plunk down from the sky. It’s my 35th birthday and I’m out on a walk with him in the rain. I should be back in the house, cleaning before a party tomorrow. But I’m not. I’m just here with him, gazing at puddles.

He tip-toes into the water. Then he stomps into the middle of the puddle, water splashing up onto his petite jeans.

A silver-haired lady walks by, a neighbor I don’t recognize. She says something I have difficulty understanding in an Eastern European accent. I finally catch that she’s asking my son’s age. I answer and she remarks, “She’s a good mom, letting you play in the puddle like that,” to my son.

35 is choosing the joy in the rain even if you “should” be doing something else. 35 is wondering what exactly strangers mean by their weird comments and choosing to take them in a positive way. 35 is following where your child and your heart leads.

That morning, that puddle-stomping child cried out at 5 AM. After glancing at the clock and waiting several minutes for him to settle down, I walked into his room. His hands were raised high and his tiny voice demanded “Up! Up!” Muttering “we do not get up at 5 AM,” I lifted him up, trudged back to our room and laid him down on our bed. Immediately, he rolled onto the middle of my pillow, leaving me with mere inches.

35 is still caring if your parenting choices are the “right” ones, but not enough to worry too much about it. It’s living with little people who are no longer babies but so far from independence. It’s loving those little people so fiercely it hurts while also feeling annoyed down to your bones with them at times.

As I was chatting to a friend on Facebook, she announced a major transition to me. As she told me how excited she was, my mind started wandering to my own self-image. Was I really happy with how I looked? Should I be more concerned with my clothes? Why can’t I just be happy with the person I see in the mirror? But the next day, I started to change my thinking. It’s okay if I spend a little bit of money to get new clothes. It’s okay to want to feel pretty and it’s okay to feel blah. If I’m unhappy, I should do something about it. Self-love is a journey, not a one-and-done thing.

35 is having old anxieties come back to bite you in the ass when you thought you were well past them. But it’s also confronting those anxieties head-on instead of pushing them down or hiding.

Reading an article about the Parkland high school students fighting for gun control, I nod my head. “Good for them!” I say to no one in particular. “I hope I can raise my kids to be that way.” Somewhere in my celebration of their effort, I realize I identify more with their parents than the kids themselves. After all, I’m twice as old as the oldest among them.

35 is realizing that you are definitely not “youth” anymore. It’s realizing in hindsight that you haven’t been “youth” for years. It’s embracing the influence you have over the young people in your life and offering support when they go to change the world. It’s reflecting on your own teenage days, while realizing the beauty of where you are now.

At 1 AM, I’m pulling the bed covers over me, collapsing into bed. I’m exhausted, but smiling. I finished the rewrite of the first draft of my book proposal. It’s another step forward towards accomplishing a goal I’ve had since I was in first grade. I close my eyes and can see my name on the cover of that book.

35 is doing exactly what you know you should be, but having trouble cramming it all in. It’s loving it all, while still being exhausted by it. It’s a juggling act of everything all at once.

35 is both / and, chaotic and calm, messy and beautiful. It’s feeling like you have it all figured out one day and having it all collapse on you the next. The times in my 30s have been the best and the most challenging years of my life so far. What else could I ask for?

My son drowned, and in my last video of him all I see is a puddle jumper
Muddy Puddles
How do we save our toddlers from the number 1 threat to their lives?
advertisement

My son drowned, and in my last video of him all I see is a puddle jumper
Muddy Puddles
How do we save our toddlers from the number 1 threat to their lives?