Thanks, Chicago, for the baby naming inspiration! 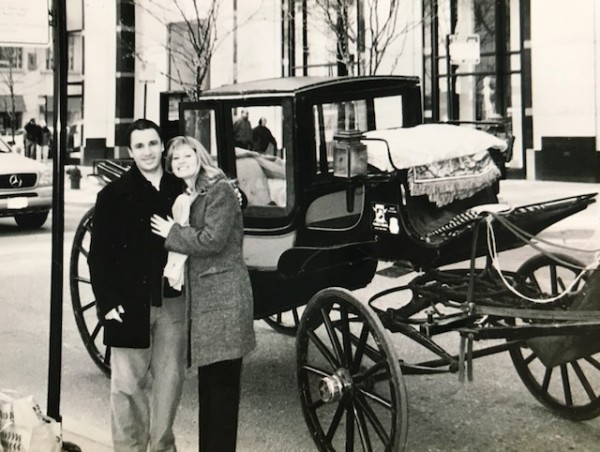 Our last name is a mouthful. It's HEIDELBERGER, and you better not blink because if you do you may just miss a few of the 12 letters. It's okay, we know our family name is not simple to read, hear or pronounce. In fact, on our first date as my husband, Brian, was eating off food my plate (a pretty intimate act after just shaking hands and a "Hi, how are ya?"), I began calling him the Hamburglar. Yes, I realize, not hugely original, but, I was nervous and the silly name eased my nerves and fit with his surname.

Fast forward a few years after that first successful blind date to our wedding, then having babies, and we decided to choose very simple and short first names to balance the lengthy last name. We named our first son Cole because we liked it and at the time there weren't a lot of babies being named Cole. Our second son was named Greydon after Graydon Carter, the editor of Vanity Fair, because I have always loved his stance on politics and, of course, his magazine. Then, we had a third son and, let's just say, without going into too much detail, we tried to have a girl. Yes, there are medical interventions to do this and we tried and tried and I about had an IVF nervous breakdown, we tried so hard. We gave up and conceived naturally and of course had another boy, whom we named Wells, which brings me to the point of this article.

Six years ago in the baby naming world it was all about using street names as first names. As we are raising our family in the city of Chicago we had endless super cool inspiration to pull from... Clark (Clark Street), Ashland (Ashland Avenue), or Lincoln (Lincoln Ave and Lincoln Park where our home is). Then, it hit me: What about the name Wells because we got engaged on Wells Street in the Old Town neighborhood?!

Brian surprised me on a chilly Saturday and suggested we go shopping for vintage art for our loft and I was not about to turn down that offer! We strolled Wells Street ducking into a couple of stores while Brian kept his composure and when we approached a fortune teller's storefront B suggested we go in to have our palms read. I thought, "Ok, this is weird. Why not? Let's do it." Our fortune teller was not on her A game and pretty comical as she struggled to remember the one and only "fortune" she was to tell me: "You will be getting engaged soon." Instead, she read my palm and stumbled and I thought, something is going on here, this is too funny to be real, but, I went with it because I'd never visited a fortune teller before.

After 10 minutes Brian stood up and shouted, "Let's go!" As I'm not one who needs to drag out anything in life I quickly followed and we hightailed it outta there. When we got outside Brian motioned to the left as a horse drawn carriage was approaching us and said, "This is for you." At this point I knew something was up, but, had no idea what was going to happen next. We stepped up to the carriage and as soon as I sat down my future fiancé fell to his knee with a loud thud and began his half rambling/half clear marriage proposal.

Of course I said, "Yes!" And we got engaged on Wells Street and eight years later named our third son after the street. Now to see his little five-year-old eyes light up every time he sees a Wells Street sign is very special. Thanks, Chicago, for the baby naming inspiration!

GIT Mom stands for Get It Together Mom! The GIT Mom parenting system focuses on mom and her happiness. If mom feels confident she will parent confidently. GIT Mom helps moms to live their happiest, guilt-free life!

Choosing a Baby Name After Starting with 71 Possibilities
To Name or not to name? A debacle or triumphant claim?
The Labor Pains of Baby Naming: One Couple's Story
advertisement

Choosing a Baby Name After Starting with 71 Possibilities
To Name or not to name? A debacle or triumphant claim?
The Labor Pains of Baby Naming: One Couple's Story