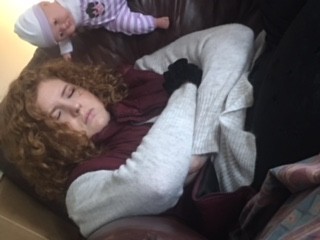 I grew up in Iowa, where the snow days were almost nonexistent. Walking to school in a blizzard? Sure. If you ask my kids who can’t verify the truth in that statement. Seriously, though, schools didn’t like to cancel back in the day. Maybe we were tougher? Maybe school administrators cared less about things like frostbite and ice-skating cars? Maybe the planners didn’t plan ahead for the occasional freebie on the school calendar? Not sure.

But oh, when those snow days came, we rose to the fort-building challenge. I remember fondly bundling up, digging and building, and triumphantly returning inside for hot chocolate about three minutes later when I was cold. Because I really wasn’t tougher. I was a whiny little snowbaby who spent 1/86 of my snow days in the snow and the rest of it getting whooped up on in some ferocious games of Monopoly and complaining about being bored.

And I honestly don’t know how the snow days affected my mother. Don’t know if she spent her break at work lamenting how we never seemed to be in school and how we were going to drive her to drink if we were cooped up in our house one more day. Clearly, I never gave mom enough credit. Because now that I am a mom myself, I have some experience with the snow day. Survival tips? Got a few. Teenage style.

But I sure do love those three words more than I could ever love any sugar cookies or a clean bathroom. I love their independence. I love their wit and their intelligence that lurks behind the sulky expressions and Snapchatting faces. I love that the conversations, while certainly few and far between, are often thoughtful and engaging. I love that they are here on the snow days and not in a college dorm where I worry if they are bundling up enough before they head out to get the cereal and cookies. And I guess at this point, I look forward to the days when those teenagers become adults who are the bringers of grandchildren on their own snow days and I get to make cutout sugar cookies.

By myself because the toddlers really only want to eat neon snacks and find animated goodness to watch on Netflix.

An incredibly flawed perfectionist, I flop around a lot and hope that I'm doing some good in the process.

Surviving Parenting with a Smile
Even in a pandemic, a snow day is still a snow day
Surviving the Winter Doldrums
advertisement

Surviving Parenting with a Smile
Even in a pandemic, a snow day is still a snow day
Surviving the Winter Doldrums