"Sometimes it's only madness that makes us what we are." - Batman 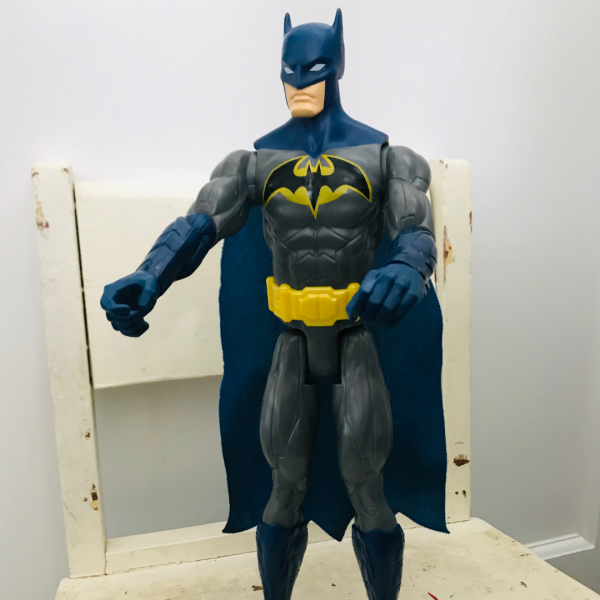 Riddle me that, Batman.

Oh wait, I forgot that Batman is just my rambunctious five-year-old wearing his Halloween mask from two years ago.

Still, this baffles me.

How can something that overwhelms the crap out of me also pretty regularly underwhelm me?

How can something -- like the three someones I birthed and their father -- matter to me so much that it feels like my heart explode, while also making me feel like my brain might explode?

How can someone or multiple someones give you purpose while making you question if you have a different but just as significant purpose outside of them?

How can I love having a passion outside of them but be engulfed by the guilt that accompanies pursuing and tending to it?

I don't think Batman has the answer and from what I've gathered, Robin and the surrounding community is stumped, too.

But, after further contemplation, here's what I think:

I think that it's not motherhood, marriage or work on its merit, that's "too much" or "not enough."

I don't think it's us, mothers, as women and individuals, that are either "too much" or "not enough," though most of regularly tell ourselves such a ridiculous story.

I think that there is an overarching societal pressure -- both on the larger scale and often even in our immediate circle or "tribe" -- to be, in a sense, superhuman.

Can't swing that? Then at least be anything but run-of-the-mill average.

That is the ridiculous, perfectionistic thinking that so many of us have unfortunately been conditioned to operate according to.

Why isn't my messy bun enough for you?

Why do you scoff at my regular rotation of maxi skirts and leggings a.k.a. my mom uniform?

Why do you care and how does it affect you whether or not I work outside of the home?

Why is it any of your business how many activities my children are (or are not) enrolled in?

Why do you feel the need to brag to me about your marriage and assume because I'm not boasting about mine that it must be in trouble?

Why do you surmise that I am either selfish or making myself out to be a martyr with every decision I make?

Why do you mock my lack of presence when I am physically present with my kids? Can't you see I'm working darn hard on multitasking?

Why does it have to be that, on any given day, a single action by myself or my children will garner us the label of "good" or "bad"?

Did you hear her yelling at her son? She's such a lousy parent.

Awe, did you see she was holding hands with her daughter? What a good mom!

Did you hear her child's sassy response? She must be a rotten egg.

Look how polite her children are! They must be so good all of the time. I can't understand why their mother looks so stressed.

Did you see her? She's not even paying attention. She's always on her phone.

This constant bombardment of judgment and inescapably observation is in fact why us mothers are so filled with stress and coated in anxiety.

It's a widely-held understanding that motherhood (and parenting, in general) is super contradictory.

Us, humans, are innately emotional, complex and even hypocritical.

This is how we were made.

So, if we are going to rid our brains and being of even the smallest of fears or belief that we are "not enough" or "too much," and that such is unsatisfactory, then we must do the following:

Batman solved the riddle when he told us "sometimes it's only madness that makes us what we are."

Mama, you will never be this or that.

It doesn't have to black or white.

On the days you are not awesome, you sure as heck don't suck either.

All of the days of our chaotic lives are contributing to the development of the authentic rockstar we are becoming; an endearingly imperfect person who longs to and will never give up on trying to improve.

And, not to get "better" for the sake of onlookers' perceptions of us, but for our children, our spouse, and mostly (and most importantly) for ourselves.

I can't think of anything more superhuman than that.

If we could grant mothers 3 wishes
Remember, You Don't Just Love Each Other - You Still Like Each Other, Too
Why empty nesting is everything you never expected — plus more
advertisement

If we could grant mothers 3 wishes
Remember, You Don't Just Love Each Other - You Still Like Each Other, Too
Why empty nesting is everything you never expected — plus more