Published by Alessandra Macaluso on June 24, 2016

The invitation had been staring me in the face for two months. So naturally, I waited until the morning of the party to pick up a gift, because I had all the time in the world, right? Birthday parties sneak up on you, sort of like waiting for an avocado to ripen: still not time, still not time, not yet, not yet, still more time, then BAM suddenly it’s in your face and you have one day to get it together or you're going to miss it. But no problem - we'll just head out and pick up a quick gift, right? What could go wrong with two kids, a mom, and a simple trip to Target?

HAHAHAHA!! Woooo! (wipes tears from under eyes, breathes a deep sigh) I should have known.

All the signs were pointing straight down to shit-show town, but I ventured out anyway because we really needed the gift. We’ll be quick! In and out. I strapped my infant son, Ciro, into his carseat, got my toddler Penelope into hers, started the car, and we were off.

I discovered recently that even though the stroller was always a torture device for Ciro, he started to tolerate it because I put him in the big seat and got a glider board for Penelope to ride on. She loves it, because now she can stand up and hang on as we cruise, and he tolerates it enough for me to walk around the block. Surely he could hold it together for a quick trip through Target, right? 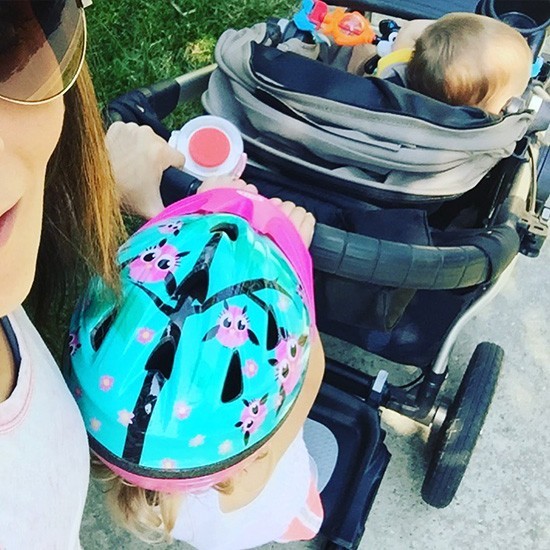 I park the car, and I walk around to the trunk to pull the stroller out. I realize that it’s buried under the forty two bags of stuff I still haven’t dropped off for donations yet, and in my mind I can picture my husband standing there shaking his head as the avalanche of old shoes, kids clothes, and stuffed animals comes barreling down at me, but whatever, no time for that. I wiggle all the pieces out from under the pile and begin the Zen-inducing process of stroller assembly. As for the mountain of stuff, I’ll deal with it later. That’s always a good plan, right?

I carefully open the car door to Ciro’s side of the car, slowly, slowly as to not startle the beast because I don’t know yet what kind of mood he’s in. He’s screaming. Awesome! I wrestle my screaming infant into the stroller. A man pulls up next to me, pretends he doesn’t see this nonsense and goes on his way. I wheel the stroller over to Penelope’s side and she’s so happy because she gets to ride on her glider board (after promising me she'd stay on it through the store). Off we go.

Ciro calmed down because he likes to be on the move, and once we got into Target he stopped complaining altogether so he must’ve been entertained. I sneak a peek at him, trying not to make eye contact, and yes - he's calm.

“Here we go!” I said, as we barreled toward the card aisle. I had our route mapped: card aisle, toy aisle, checkout, OUT THE DOOR. We grabbed a quick card and were on track to the toy aisle. Penelope controlled herself and only jumped off the glider board once, but got right back on when I reminded her of her promise. I grabbed a musical toy for the birthday boy, a little "frog" drum set that ribbits and everything. Ciro started complaining again and it was escalating quickly, so I picked up the pace.

As I rounded my way toward the checkout I thought about my rushing and planning through this task. I always thought to myself, my kids will not rule my life. I will still go out and do things and they will listen to me and be good as I say, because I can’t change my life around completely. And in some ways, I still agree, but in others? HAHAHAHAHA.

I can still do whatever with them, take them places, but at this age of fussy infant and unpredictable toddler I’m always asking myself: what’s it worth? I mean, could I do it? Could I wing it, miss naps, tote them everywhere and just be "on-the-go mom" all day every day? Sure. But is it worth all the effort to get somewhere, the prep, the setup, the meltdowns later, and listening to a screaming baby who really would have rather stayed home? To have zero energy left at the end of the day after all of the lugging and prepping and consoling and lifting? To be judged in public when the baby gets upset? I mean jeez, people, if you don’t want to listen to a screaming infant then GET THE HELL OUT OF THE BAR.

I’m kidding. Anyway, my point is that even after all that setup it sometimes isn’t worth it or enjoyable for any of us if someone is miserable. And how many places does a baby need to really go, anyway?

I was snapped out of my daydream when Ciro suddenly went from yellow to red alert, so I picked up the pace and rounded our way toward the checkout. We passed the women’s clothing section and while I couldn’t stop and browse, as we hustled on by I stuck out my hand and grabbed the first shirt my fingers touched because you know what? I deserved it. I worked my butt off all week long and if wrangling two children into Target isn’t deserving of a grab-bag drive-by clothing item from Target then I don’t know what is.

As we neared the checkout Ciro lost his mind and would NOT STOP screaming. I couldn’t pick him up because I had to check out and pay, and I needed him in that seat because his weight in the stroller was holding it down so that Penelope could ride on the glider board. If I lifted him out, she'd go flying and then it would be a TODDLER ON THE LOOSE in Target. One bad decision and it'd be Dominos, shit-show edition. Besides, we were almost finished! We made it this far!!

We were in the home stretch, me pushing the stroller with one hand and holding the frog drum set with the other. Because of the extra bounce in my step my thumb kept hitting the button of the drum, so in between Ciro's screams you heard "ribbit, ribbit, ribbit"... it was like we were a three-person traveling band called "Shit Hits the Fan in Target".

Finally at the checkout, I fumbled for my card and swiped, and then the machine did that annoying BEEP BEEP BEEP noise which may as well just be an arm that reaches out and pokes you in between your eyes repeatedly because that’s basically what that noise feels like. I swiped, it wanted the chip. I gave it the chip, it yelled at me. Ciro was still screaming since the stroller stopped moving and I felt my face getting hot.

The shenanigans had attracted the attention of everyone around us, including one woman who thought she might “try to help” by approaching the stroller.

NICE LADY: “Hey there little guy!!” (gently lifts hood of stroller, peeks in) “Are you doing OK in there -- ”

She tried. I appreciated it, and I told her that as we left. She told me how she remembers when her kids did this, although I’m pretty sure they probably didn’t scream in innocent ladies' faces, but maybe they did. Maybe they did worse. On our way out I received a head nod from a dad there with two toddlers.

As I was leaving, still red in the face and on the verge of tears from the sheer embarrassment, something funny happened: the feeling lifted, and I realized I wasn’t embarrassed at all. The checkout lady at Target was so nice, pointing me in the right direction toward the shorter self-checkout line (in hindsight it was probably her survival instincts that kicked in, steering us the other way, but whatever). The people, instead of shooting me daggers and judging me, genuinely felt for me and tried to help. Penelope was so good throughout the whole thing. What I’m saying is that after leaving Target I actually felt better.

We got home and I fed the kids lunch, then I put them down for a nap. When all was finally quiet I went to wrap the present, and in the bag I found the random shirt I grabbed. It was the first time I looked at it. I tried it on, and you know what? I liked the shirt. It fit me perfectly. That's Target for you.

Alessandra Macaluso is author of The Real-Deal Bridal Bible and What a Good Eater!. Learn more about Alessandra and her current projects at her website AlessandraMacaluso.com.