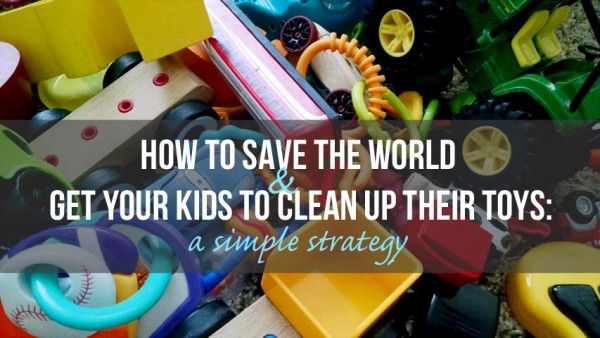 Kids love to play. Play = messes. And that’s okay with me. Messes mean that my boys are busy exploring, building, growing, and otherwise doing exactly what I want them to be doing. But they also seem to be naturally much better at getting everything out than they are at putting it away again.

I gave up long ago on having a clean house all the time. I have kids, people. Deal with the Cheerios under my couch and the art projects drying on my counters. But I also feel like it’s important for kids to be responsible (at least to some degree) for their own messes. If you get it out, you better believe you are going to help clean it up.

My three-year-old is actually pretty good at this. He drops his dishes in the sink without being reminded, often remembers to put his shoes on their shelf in the laundry room, and generally doesn’t fight me when I tell him it’s time to clean up toys before lunch, dinner, and bedtime (our general tidy up times). However, occasionally things get out of control. Like when Little Man and our cute neighbor decided to pretend it was the baby’s birthday and wanted to give him “presents.” While he sat on the couch, they took turns bringing him “new” toys, which of course resulted in them piling every toy they could find on the couch (and gave me the realization that we have a lot of stuff). 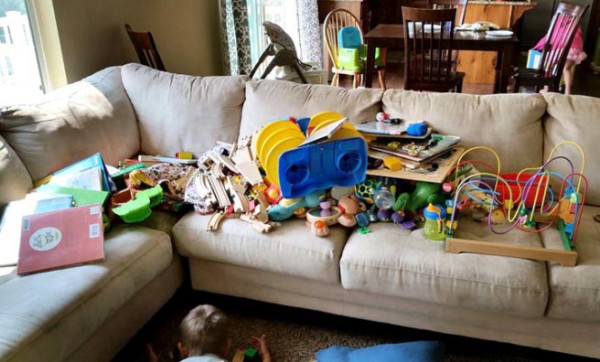 This kept them occupied for at least 20 minutes (hooray!), and they had so much fun…until they realized that I expected them to put it all away. Then, they were completely overwhelmed.

I tell the kids that the world is in danger of exploding. The only way we can save it is by cleaning up all the toys in (insert whatever place you want cleaned) before time runs out.

I help each of them pick a super-spy code name, and explain their mission: to put away all the toys in X number of minutes (however many I think it will take). I set a timer, very dramatically get everyone in their “ready” positions (sometimes we even add costumes), and yell, “Go!”

I get in on the cleaning, too, using my enthusiasm and speed to encourage their own. Five minutes later, we celebrate with high fives and sing our own praises for bravely saving the world. And I silently giggle at my sneakiness.

I love that they get to keep playing and I get a clean space without whining. My brother used this on me when I was little, and I loved it. I used it on the kids I babysat as a teenager, and their parents were thrilled when they came home to a clean house (and wanted to know my secret). Now, I use it on my own kids (and their friends) with success.

In fact, on the day of that explosive “birthday party”, I got a text from our neighbor’s mom after she went home telling me how her daughter kept talking about how I had played a really fun game with them where they got to save the world. Who knew her favorite part of the day would be cleaning? But that’s the trick, right? In her mind, it wasn’t cleaning. It was a game.

It’s all about finding the sweet spot that meets everyone’s needs.

I am a former middle school English teacher turned full-time mom exploring the world (or at least my backyard) with my two little boys each day. I love to craft, cook, relax with a good book, and capture all of it with my camera.