Published by Jennifer Lizza on December 16, 2017

Do you remember the magic you felt as a child at Christmas? There was so much to love about this time of year you undoubtedly sported a permanent grin from Thanksgiving to December 26th. After all, you were a kid so Christmas was stress free and chock full of excitement. When I think about the things that made me happy as a kid I quickly remember baking cookies with my mom and sister, visiting relatives and playing with my cousins, watching Christmas movies in my footy pajamas, neighborhood parties, school parties, and ripping open every new delivery of Christmas cards from friends and family. I loved all of it.

Of course the most excitement came from knowing that Santa Claus would be coming soon. Every year my parents brought us to take pictures with Santa and the whole way there in the car I would practice what I was going to say when he asked me what I wanted for Christmas. I would inevitably get nervous and only remember one of the things I had practiced, but either way I left there full of excitement. It was pure joy. It was innocent, magical, and a time of never doubting in jolly old Saint Nick. As we all know, that innocence sadly fades with time and age. Last week I posted a great story on Facebook about my friend’s son starting to doubt Santa. An amazing man named Bob, who just happens to look exactly like Santa, stepped up and took a picture with her elf to show her son. He had only been there to service the furnace but he left there restoring her son’s belief and giving her one more year of magic.

Everyone loved the story. A couple of days later sad news hit a local garden center. The Santa from the garden center, who everyone had loved, had passed away. Facebook was flooded with story after story about Ray Beesley better known to most as Santa, and his amazing heart. My friend forwarded me a story from a friend of hers, and as I read it with tears rolling down my face, I just knew I had to share it. We wound up connecting on Facebook and she gave me the go ahead to share her story. Get a tissue and be prepared to feel the magic of Christmas all over again. This is Amy’s story.

Anyone who knows me knows my sincere affection for this man. He was more than "Santa" he was a genuine, gentle, sweet, compassionate human being. I have to share the reason why I fell in love with Christmas again after I thought I never could.

When my son Zach was diagnosed with Autism in 2004, I fell into a deep, dark depression. The holidays were especially hard. Seeing the magic of Christmas through your child's eyes is one of the joys of being a parent. I didn't have that magic. Zach didn't care about Christmas, didn't care about receiving presents, and he didn't care about the Christmas tree or any decorations.

One day while shopping at the Wayne Town Center, Santa was just coming back from break, and there were no lines. I decided to have his picture taken, purely for a photo op. He wasn't able to tell Santa what he wanted for Christmas or tell him if he was a good boy. It was strictly a “What the Hell” moment. I thought maybe I could get a cute picture. I wasn't feeling the magic of Christmas at all. When his session was over, Santa stood up and hugged me real tight. I will never forget how he told me in his sweet gentle voice, "God gave him to you, and he wanted you to be his mom. You are a special mom. Santa loves you, God bless you Mom.”

It was almost like he knew! There I was sobbing in the middle of the mall hugging Santa so tight I thought I was going to break him while Christmas music was playing. Ray Beesley saved me that day; he gave me back the magic of Christmas. We went back every year. He always remembered us. He never let us wait on line, always waved us to the front. He always remembered Zach's name. I knew he was ill in the spring so last week, I stopped at the religious store and bought him a Saint Jude coin to give him when we saw him this weekend. Sadly, we never made it. This man will never be forgotten. I only wish he knew what a huge impact he had on our lives. To everyone else he was Santa, but to me he was a blessing!
Rest in the sweetest of peace "Santa." 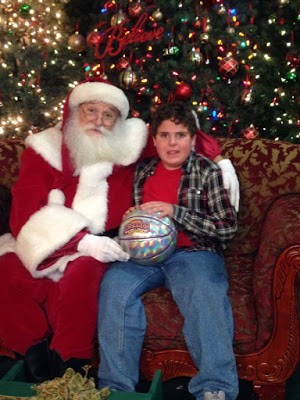 I realized after reading Amy’s story that the magic of Christmas doesn’t fade as we get older. We somehow just lose faith in all of it. We have so many other things in our lives to deal with that we struggle sometimes to find the joy in the simple spirit of the holiday. Ray gave that spirit back to countless people. Amy’s story is only one of thousands that have been popping up on social media. This man was undoubtedly the real Santa. When I think of Santa, I think of a kind, gentle, giving person who listens when someone needs him and knows exactly what people need. He didn’t need Amy to tell him what she wanted for Christmas. He knew. He knew she just wanted to feel the joy of Christmas with her son. She wanted him to feel the excitement. She wanted to feel the magic. Ray gave her that. He didn’t rush her and her son Zach through a line of crying kids. He stood up and looked at her when she needed it most and told her she mattered. He told her she was more than good enough and he hugged her.

There are real Santas all around us. Bob showed me that last week, and Amy’s story further proved it to be true. You see Santa is real. He is the kindness we find in a person we don’t know. He is the joy we see in our children. He is the spirit of Christmas. Christmas is not about stressing out trying to find the hottest sold out toy. It’s not about getting your kids to smile perfectly for your overpriced card (guilty). It’s about finding time for people. It’s about finding time for love and kindness. It’s about letting those around you know that they matter to you.

Ray Beesley taught us that every year. There was a reason his lines were so long, and it wasn’t just because he did in fact look like the most perfect Santa. It wasn’t just because every child on that line believed he was Santa. It was because every parent believed it too. It was because, if only for a moment the stress seemed to lift and we were able to once again feel the magic. We walked into that building as adults full of stress thinking about our long lists and all the things we had left to do, but we left feeling the magic and joy of the season. We left not only full of joy as we watched our children smile and skip to the car. We left remembering the child we once were, and even if only for a couple of hours the innocence of the holiday returned to us.

Ray left us all too early, but I for one, just know that he is somewhere else bringing the joy back to so many who have missed it for all too long. Ray “Santa” Beesley had bigger things to do, and there is no doubt that he is doing them as only he could. Thank you Ray. Thank you for reminding us about the true meaning of the Christmas season. Thank you for allowing us to Believe. 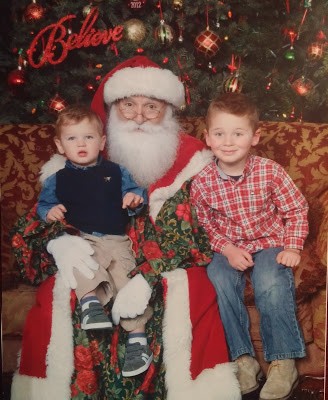 This piece originally appeared on Jennifer's blog, Outsmarted Mommy in December of 2016.

The Real Santa Claus
Mommy, Is Santa Real?
My Son Taught ME A Lesson In Giving
advertisement

The Real Santa Claus
Mommy, Is Santa Real?
My Son Taught ME A Lesson In Giving