Since our two boys were babies, we've maintained sanity with help from bedtime routines. Parenthood is hard enough to survive in general, so why torture ourselves by not helping our kids sleep well?

The hands of the clock may vary, but the routine is a constant. Even when traveling, we try to keep some semblance of our regular routine. When our older son was born eight years ago, I'd learned all about the three Bs (bath, books and boobs). Or bottle for those not nursing. I thought the three Bs were a bunch of malarkey until it actually worked and then I was sold.

As he grew, our bedtime routine became more and more elaborate with lotion application, songs, chants, jokes, talking stuffed animals and movement. At some point, we added "running hugs" which involved our toddler running as fast as he could across the room and tackling us with a hug.

The finale included reading a couple books and me snuggling in bed with him until he fell asleep. If you're still in the early years of bedtime routines, try not to get in the habit of getting cozy with your kid until he falls asleep because I promise you, you'll be the one who passes out until 11:00 pm at which point you're too delirious to adequately prepare for the next day.

When we had our younger son, we began a second round of bedtime routines. Again, I started with the three Bs which worked very well until toddlerhood. Each child has his own personality, so our little one wanted his own unique bedtime routine. He came up with something called "night-night questions" which weren't actually questions at all, but me performing a monologue about what everyone in the family had done that day. And when I talked like a valley girl, he liked it even better.

A night-night question monologue went something like this (picture this happening in a valley girl voice).

"So like, today was such an awesome day. Daddy went to work and was like totally in charge of an entire middle school. And mommy sat at her computer all morning and typed her fingers silly. I mean, like, her fingers are so tired! And you went to school and learned about dinos and bugs and all kinds of super amazing things while brother went to his school and read books and did math and all that big kid stuff you'll be doing before you know it. And now, we're gonna like sleep all night and it's going to be utterly fantastic. So you nestle way down down in those puffy covers and sleep really, really good, you little cutie."

I had to say the same exact thing every night or he would correct me and I had to start over. Following the monologue, I gave him kisses all over his face and neck and belly. After all of that, I would go into his brother's room for books and snuggling. As a side note, my husband was helpful with logistical stuff such as baths and brushing teeth, but both boys only wanted me for the fanfare.

Honestly, there was a period of time where our bedtime routine took an entire hour and if I accidentally fell asleep with one of them, the night was shot. But now, as I sit here and write this, I realize how quickly all that flew by and how much I loved it.

Fast forward a few years and the boys are now eight and five. By choice, they sleep in bunk beds in one room they've coined The Boy Cave. The length of our bedtime routine has decreased significantly and is combined with the two of them.

The three Bs are no longer necessary. They still bathe (most of the time) and we read books earlier in the day or before bed, but those two things are no longer needed immediately before shut-eye.

At this point, the routine goes something like this. The boys get on pajamas, brush teeth and feed the fish. I'm a big essential oil nerd so each night I prepare the diffuser, or "confuser" as my five-year old calls it. I'm not going to correct him quite yet. We've just all started calling it the confuser.

I then put an essential oil blend on the bottoms of their feet to support immunity and good sleep. We ensure they have their numerous stuffed animals, blankets and so forth in bed with them. The routine concludes with me playing a music box, singing a solo of Twinkle Twinkle Little Star followed by a rendition of You Are My Sunshine where we all have parts, giving a lot of kisses, saying good night and closing the door.

It's enjoyable to sit here and think about all of our various bedtime routines. There were times when I thought the boys would never go to sleep or I would never get any of my own tasks accomplished but now, even though they're still pretty little, they don't need us nearly as much and that makes me kind of sad.

Our current bedtime routine is fun and so sweet but no longer absolutely necessary. If we stay at a friend's house late or come in from a trip during the wee hours, the boys crawl in bed without any shenanigans and fall right to sleep.

I wonder if now the bedtime routine is more for Mom and Dad than the kids. I don't care if it is. I love it and as long as they'll allow me to sing songs, come up with rituals and kiss their soft, innocent cheeks, I'm all about it.

As any parent knows, they're only little once. And I'm hanging on to that as long as humanly possible. 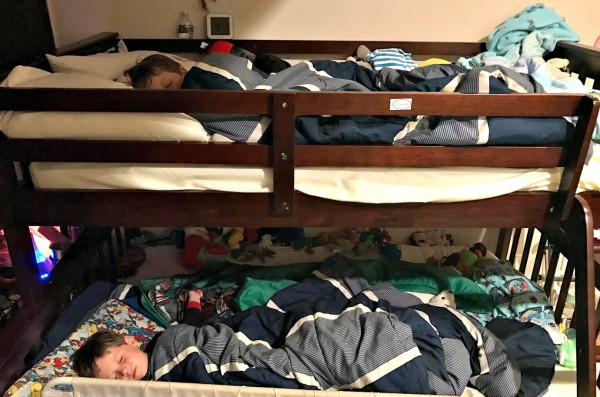 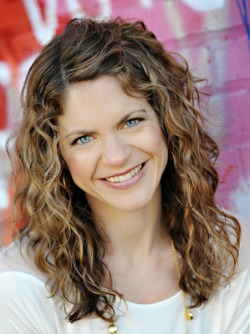 Tell Your Kids "Sleep is Your Friend!" + the Importance of the Routine (school aged kids)
The Struggle Is Real: I have a 16 yr old and I’m not sleeping (Again)
Toddler Bedtime Routines- How to Stop Your Toddler From Delaying Bedtime
advertisement

Tell Your Kids "Sleep is Your Friend!" + the Importance of the Routine (school aged kids)
The Struggle Is Real: I have a 16 yr old and I’m not sleeping (Again)
Toddler Bedtime Routines- How to Stop Your Toddler From Delaying Bedtime